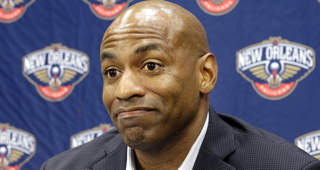 The Minnesota Timberwolves continued to remake their front office under new president of basketball operations Tim Connelly. The latest hire for the Wolves is longtime NBA front office executive and coach Dell Demps.

Demps was previously the general manager for the New Orleans Pelicans for nine seasons. Most recently he was working as an assistant coach under Quin Snyder with the Utah Jazz. With Snyder resigning as Jazz coach, Demps is moving to the Wolves and back over to the front office side.