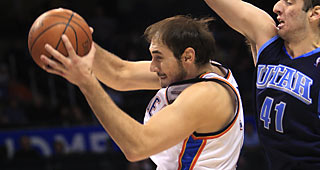 Through the first two rounds of EuroBasket 2013, there’s been no country more impressive than Serbia. Despite having the youngest team in Slovenia, with an average age of 24, they are tied for the second-best record. They have an 8-3 mark through group play, including a 63-56 victory over Lithuania and a 77-65 defeat of France. After a decade where they won only one medal in international competition, the Serbian national team looks poised for a resurgence.

The MVP of this year’s team is one of their only veterans, former NBA center Nenad Krstic. Krstic headed overseas two years ago at the age of 27, still young for a big man. He has plenty left in the tank, averaging 17 points and 5 rebounds per game on 52 percent shooting in EuroBasket play. At 7’0 265, he’s got a good combination of size and skill, with the ability to post up and stretch the floor out to 20 feet. If he wanted to, he could go back to the NBA tomorrow.

The Serbs run most of their offense through Krstic, who is effective as a roll man and a shooter in the pick-and-roll. When all else fails, he gives them the option of throwing the ball into the low block. While he’s not all that graceful, he’s a fundamentally sound 7’0 with decent touch and footwork. In the NBA paint, the domain of the biggest and most athletic players in the world, Krstic is an average center. Across the ocean, he was first-team All-Euroleague in 2012 and 2013.

Just as importantly, Serbia has the personnel to maximize his skill-set. Their starters can all pass and shoot; they put four skilled players around Krstic and try to space the floor as much as possible. It’s a very fundamentally sound brand of basketball, with a lot of cutting and screening. They were able to frustrate France, the more athletic team, by controlling the tempo and keeping the game in the half-court, where they had the edge in size and execution.

Running the show is Nemanja Nedovic, whom the Golden State Warriors took at No. 30 in this year’s draft. Nedovic, a 22-year-old who has been dubbed the “European Derrick Rose”, will come over to the NBA after EuroBasket. A 6’4 200 combo guard, he’s averaging 9 points, 3 rebounds and 2.5 assists a game on 37 percent shooting. As long as he can make 3’s, Nedovic has the size, skill and athleticism to play both guard positions in the NBA. He’s shooting 30 percent from deep in Slovenia.

The breakout player is 21-year-old swingman Bogdan Bogdanovic, who plays for Partizan Belgrade, the top team in Serbia’s pro league. Bogdanovic has been their most consistent perimeter player, averaging 10 points, 3.5 rebounds and 2 assists a game on 43 percent shooting. At 6’6 200 with a 6’11 wingspan, he has great length for his position and a good feel for the game. While he’s not an elite athlete, he’s a legitimate prospect for the 2014 NBA draft.

Nemanja Bjelica, their power forward, was a second round pick of the Minnesota Timberwolves in 2010. Now 25, he may never end up being brought over, but he’s an NBA-caliber player who plays a huge role in their system. At 6’10 210, Bjelica is not a great shooter, but he’s good enough (30 percent from three on four attempts per game) that he drags his man out of the paint. He’s unusually skilled for a player his size; he can attack a close-out and run the offense in a pinch.

There’s more talent coming down the pipeline too. EuroBasket 2013 is the national team debut for Vasilje Micic, a 6’4 185 PG coming off a strong performance at the U19 world championships in June. He was a first-team All-Tournament selection, beating out a number of high-level American guards, including Marcus Smart. Micic’s size and shooting ability make him a natural pick-and-roll player; he’ll be a first round prospect in either the 2014 or 2015 draft.

The Serbian performance in EuroBasket 2013 is the culmination of a number of victories at the youth level in the last few years. They have silver medals in the last two U19 world championships, losing to Jonas Valanciunas and Lithuania in 2011 and an absolutely loaded American team in 2013, which featured Smart, Jahlil Okafor and Aaron Gordon. From 2010-2012, Serbia went home with two bronze medals and a silver in the European U18 championships.

While this generation of Serbian players lacks a star, they have a solid nucleus who can grow together going forward. They have NBA-caliber players at every position, a huge advantage against national teams with an uneven distribution of talent. Like the “Golden Generation” in Argentina, Nedovic, Bogdanovich, Micic and Bjelica will spend most of the next decade learning each other’s games inside and out at EuroBaskets, World Cups and the Olympics.

At EuroBasket 2013, the key for the Serbians will be avoiding turnovers and playing at a controlled pace. Neither Krstic nor Bjelica is much of a shot-blocker, so Serbia can’t afford too much dribble penetration; Krstic is less valuable when the game is sped up and his athletic deficiencies become more apparent. If their two big men get in foul trouble, there isn’t much behind them either. 6’10+ players with their skill-sets don’t grow on trees.

Going forward, Serbia should at least have a puncher’s chance of reaching the medal round in international competitions. The country has a great basketball history, including a silver in the 1996 Olympics and gold in the 1998 and 2002 world championships. Yugoslavia was a power in basketball too, although several nationalities contributed to those teams. If Serbia had Dario Saric (Croatia), Nik Vucevic and Nikola Mirotic (Montenegro), they could play with anyone.

With a population of a little over seven million, Serbia will have a tough time producing enough talent to compete with a continent-sized country like the United States. Nevertheless, the people of the Balkans are some of the tallest in the world, with an average height of nearly 6’1. For 19-year olds like Micic, the wars of the early 1990’s are ancient history. When you connect the dots, it’s easy to see the roots of the national team’s decline in the 2000’s and its rise in the 2010’s.