How Nicolas Batum Continues Evolution Of His Game, Mindset 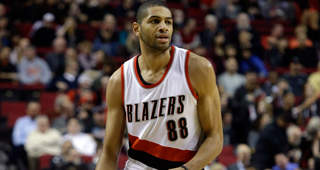 Sometimes, Nicolas Batum senses irritation within people expecting more than his passive offensive game, his penchant to involve teammates and orchestrate scores with vision and rebounding. He never grew up taught to score in the volume of the Michael Jordans and Kobe Bryants, instead idolizing Scottie Pippen and becoming inspired by a statistical line: 17 points, 10 rebounds, seven assists. This was the drive, Batum’s idea of a most balanced basketball player.

Every summer, his old French buddies return to their native country for the national team’s training camp and words of the practices in San Antonio, of the culture and free-flowing system, fascinate Batum. Tony Parker, Boris Diaw and San Antonio gave Batum and the Portland Trail Blazers a clinic in the Western Conference semifinal playoff series last season, and Batum pondered how he could play for those Spurs amid all the connected passes for wide-open shots, all the cuts and drives born of the sport’s fundamentals.

As Batum thought aloud, “Yeah, maybe I could. Maybe.”

Batum wasn’t looking outside Portland, but rather gauged his fit on a champion, any title winner, really. The Spurs showed the Blazers how basketball should be played, Batum says, and now Portland has started the season more cohesive, more potent. Away from Parker, away from co-stars in LaMarcus Aldridge and Damian Lillard, Batum learned the responsibilities of a leading scorer with the French team over the summer, a task Diaw bestowed upon him. Your team, your time.

And so Batum went for 35 and 27 points in the final two games of the World Cup to give France the bronze medal, and he noticed his Portland teammates urging him in training camp: Shoot, Nic. Shoot.

“I try to do everything on the court, but I know I got to be more aggressive,” Batum told RealGM. “The team needs it. Everybody’s pushing me here. When Tony Parker didn’t play with us this summer, Boris Diaw and I had to step up our games. That was a cool learning experience for me. Here, we’re all young and I would like to be the guy for LaMarcus and Damian. I would like that a lot. But I know I need to be aggressive, and it is coming.”

The Blazers believe their internal improvements along with the offseason’s bench additions will bring an elevated level of play in the postseason, but Batum has the ability to expedite the process, skills to alleviate droughts that their offense suffers at times. In his mind, Batum knows he must shoot more than eight-to-nine attempts a game, triggering significant drops in his shooting percentages and scoring outputs this season.

Even so, Batum still hasn’t fully recovered from a right knee injury troubling him from the outset of the season. He won’t blame his play with France for the wear and tear over the summer, a run further cementing his determination for the game, but regaining full strength in the knee is an ongoing process.

“I’m working on the knee, working to get it back to 100 percent,” Batum said. “It isn’t yet and it has bothered me a little bit, but it is coming along. I’ll get it right. But this is my game. I’ve always tried to do it all on the court. I never really was a scorer when I was young. Never had 25 points, 30 points per game. Growing up, I was always around 17, 10 and seven.

“That’s what I love to do, play both sides. Scottie Pippen was my favorite player, and I grew up watching him and always wanting to follow him.”

He has elevated the facilitating, the wing defense for the Blazers for seven seasons now, and scouts around the NBA agree: Batum has a mentality playing to score, not scoring to play. There’s no ideology of: let me score and then start to function other facets of the game. From Terry Stotts and his coaching staff to the veterans, Batum has been implored to score, to shoot, but he’ll forever defend and play for the best shots even when they aren’t coming his way.

Batum looks around the league, hears everyone already discussing the free agency of Kevin Durant. They’ll both fall in 2016, yet Batum believes he and Durant are made of the same disposition with different external temperaments. Durant’s been swarmed with questions about his future with the Oklahoma City Thunder. For Batum, the case is simple: Why leave Portland?

“I still have time and I like low key so there’s no reason to think yet, but why not stay in Portland?” Batum told RealGM. “I’ve been here for seven years now, so why not?”

His longtime friends came into a second-round series a season ago and showed the sport at its peak, and Batum left the matchup believing he could fit on a champion one day. In so many ways, he is a classic Spur: Passing, cutting, playing for the optimal score. Still, Portland needs to reach another level to supplant the West’s top contenders, relying upon Batum to tap into the next tier in his skill.

All around the Blazers, they’re pushing Nicolas Batum to be more assertive, to find the next echelon, and he promises one thing on his health and his game. “It’s coming.”