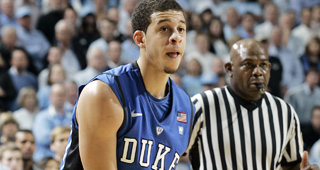 Seth Curry signed a 10-day contract with the Phoenix Suns out of the D-League and here is a scouting report on his game:

Situation: Phoenix point guard Brandon Knight has been ruled out of Wednesday’s game against Minnesota and the Suns went into the D-League to find a backup for Eric Bledsoe. Curry, in his second professional season out of Duke, was given a 10-day contract after spending this season with the Erie Bayhawks. He spent brief time with Memphis and Cleveland last season but didn’t stick and played in the Las Vegas Summer League with the Suns. Phoenix had a logjam at the point guard position, but after a hectic trade deadline and Knight’s injury, there will be time available for Curry immediately. He was a D-League All-Star the past two seasons and will hope to make an impression in his 10-day deal.

Size/Athleticism: At 6-foot-1, 180 pounds, Curry lacks ideal size for the NBA level. He’s a subpar athlete that has limited quickness.

Ballhandling: Curry plays at a good pace and shows a good feel for the game. He changes speeds well and can be effective in the pick-and-roll. While he hasn’t been the primary ballhandler as often this season while playing next to Peyton Siva, Curry played the point guard spot full-time last year and showed major improvements as a ballhandler.

Penetration: Curry isn’t at his best attacking the rim, as he struggles to finish against bigger rim protectors. He doesn’t have the greatest first step and is shooting just 49.7% from inside of 8 feet, ranking below the D-League average.

Passing: Curry has seen his assists numbers drop while playing primarily off the ball this year, but he’s still averaging 3.9 assists per game. He shows the ability to get the ball where it needs to be and can hit the roll man out of the pick-and-roll. Curry can struggle against double-teams or lengthy defenders, however, as he commits 3.0 turnovers per contest.

Defense: With below average physical tools, Curry can struggle keeping quicker guards in front. His defensive ability will be something to monitor in the NBA.

Rebounding: Curry won’t be a stellar rebounder in the NBA, but is averaging 4.3 rebounds per game in Erie. He’s tough and not afraid to compete inside.

Versatility: Offensively, Curry could play either position in the backcourt. He may actually be more effective off the ball, but defensively he’ll need to defend opposing point guards.

Final Analysis: As the second leading scorer in the D-League, averaging 23.5 points per game, Curry looks ready to add productive minutes off the bench for Phoenix. He’s a lethal shooter who has shown improvement when running the pick-and-roll. His size and athleticism may not be ideal, but Curry’s shooting ability, basketball IQ, and instincts help compensate. With minutes available and a year of professional basketball already under his belt, Curry may surprise in Phoenix.