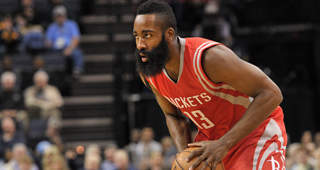 There was a changing of the guard in one half of the Western Conference bracket this season, with the Los Angeles Clippers outlasting the San Antonio Spurs in a classic series, while the Houston Rockets made quick work of the Dallas Mavericks. Both the Mavericks and the Spurs have been fueled by Hall of Fame 7’0 for almost two decades, but neither team had the answer for the younger, fresher big man - Dwight Howard and Blake Griffin - on the other side. The numbers speak for themselves - Howard averaged 17 points, 14 rebounds and 3 blocks a game on 58% shooting while Griffin chipped in 24 points, 13 rebounds and 7 assists on 47% shooting.

Both guys now have the chance to take their teams into the uncharted territory of the Western Conference Finals. Here’s how the match-ups look in what should be one of the more entertaining series of the second round of the playoffs.

The first order of business in this series is figuring out how injured Paul is after his incredible performance on one leg in Game 7. There isn’t much turnaround for the Clippers, who play Game 1 in Houston less than 48 hours after their win over the Spurs. Either way, Kevin McHale is probably going to make sure his elderly PG tandem of Jason Terry and Pablo Prigioni doesn’t see much floor time against CP3. Expect to see a lot of Trevor Ariza cross-switching in this series, a tactic which worked well against Monta Ellis in the first round. At 6’8, Ariza has the quickness to stay in front of much smaller guards and the length to bother their shot without giving them driving lanes to the rim.

If Paul is hobbled, it’s going to be an uphill battle for an LA team that doesn’t have a lot of depth to begin with and left it all out on the floor in the first round. They need him to get into the teeth of the defense and set up everyone else, especially since Blake Griffin isn’t going to have as much of an overwhelming athletic advantage in this series. An interesting wrinkle the Rockets could try to slow down Paul in the two man game is being more aggressive on the ball-handler and even switching pick-and-rolls, as all three of their main big men - Dwight Howard, Terrence Jones and Josh Smith - have the footspeed to stay in front of smaller players on the perimeter and the length to make the dump-off pass difficult.

On other side of the floor, Paul will have to resist the temptation to help off Terry, as he’s only in the game to space the floor and knock down open 3’s. With JJ Redick unlikely to spend much time on James Harden, Paul could be asked to guard bigger wing players like Ariza and Corey Brewer, who will try to wear him out over the course of the series. The way the Clippers roster is constructed forces their stars into Herculean efforts and the cumulative toll could rear its head as the series goes on.

There’s a lot of similarities between the PG and SG match-ups in this series, as both teams have a subpar defender on the other’s primary option. That’s why you can expect a lot of cross-switches, which makes taking care of the ball even more important than usual given the chaos changing defensive assignments can incur in the open court. The scary thing for the Clippers is there’s really no one else in their rotation besides Matt Barnes who can credibly cover Houston’s MVP candidate. Paul at 100% is a pesky defender, but he would still be giving up a ton of size to Harden. As much as it might pain Doc Rivers, he might need to play Dahntay Jones over his son over the next two weeks.

For Harden, it’s the same story as the first-round over Dallas. If he can wear out his primary defender and get him in foul trouble, he can expose the lack of perimeter stoppers on the other team. One thing that stands out when you break down the match-ups is what Harden could do to Glen “Big Baby” Davis in the two-man game. The Rockets devastated the weak link in the Mavs defense in the first round (Dirk Nowitzki) and there’s nowhere the Clippers can hide Davis that won’t force him to defend Harden in space at some point in this series.

What Redick and Barnes have to do is take advantage of the Rockets PG’s and force Harden to play on both sides of the ball. Whoever is being guarded by Terry/Prigioni will have a huge height advantage and whoever draws Harden has to get into his legs and force him to expend energy on defense. The goal should be to force Terry off the floor, which would limit the amount of ball-handling and shooting in the Houston line-up. This dynamic is where you really see the Rockets missing Patrick Beverley.

The two prototype 3-and-D SF’s will see very little of each other over the course of this series since both guys have much more pressing defensive assignments to deal with. Both are crucial to what their teams want to do - most elite NBA teams these days are going to have 6’8 guys who can defend multiple positions and knock down open 3’s. A crucial difference in this series could be which guy gets more open rhythm 3’s and which one knocks more down. It’s a make or miss league and now would not be a good time for either Barnes or Ariza to go through a shooting slump.

There’s no rest for the weary at the PF position out West - Jones went up against LaMarcus Aldridge last season, Dirk Nowitzki in the first round and now he gets Blake Griffin. It’s a much different match-up for Jones, who gave up height but had the athletic advantage against the two older 7’0. Against Griffin it’s a battle of strength on strength, as two of the most athletic players at their position in the NBA go head-to-head. Jones has a lot of Griffin in his game - he’s a 6’9 power forward with a developing outside shot who can put the ball on the floor, make the correct pass under pressure and play way above the rim.

What the Rockets are going to want Jones and Josh Smith to do is make Griffin work on the other end. Both guys are longer than Blake and can jump about as high so they want to go right at him and try to get him in foul trouble. That could end up being a huge difference in this series - the drop-off between Jones and Smith is negligible compared to the canyon-sized gap between Blake and Big Baby. Houston’s PF’s were huge in their win over Dallas and they have to continue putting pressure on a thin Clippers frontline.

It’s the same story for Blake as it is for Paul in these playoffs. LA needs their stars to carry their team to victory in much the same way they did against San Antonio. Not only must Blake dominate his man to the point where he commands double and triple teams, he has to balance looking for his own shot verse getting everyone else involved and fight off an exceptionally athletic Houston frontline on the glass. His reward for getting past the first line of defense? One of the only C’s in the NBA who can run and jump with him.

This will be a Bizarro match-up for Dwight, who usually has a huge athletic advantage and a technical disadvantage against the C he goes up against. It’s the exact opposite when he goes up against DeAndre, one of the only C’s in the NBA who is A) a bigger and better athlete and B) a worse free-throw shooter. Hopefully the refs swallow their whistles and let these two physical specimens go at it. That’s what this series could come down too - which frontline can impose its will on the other.

Can Dwight score 1-on-1 against DeAndre? Can DeAndre create extra possessions by beating Dwight to the offensive glass? What if these two have to knock down free-throws in the final stages of the game? It’s a good thing Gregg Popovich won’t be involved in this series because otherwise you could have seen these two guys spending 40 minutes a night walking to the free-throw line. They key for both is they are tasked with being the anchor of the defense but they can’t overextend too far out or they are going to give up the lob.

Smith dominated the Mavs' second-unit big men and he could do the same in this series, since Big Baby Davis and Hedo Turkoglu have about as much chance of guarding him as I do. Even if those guys play off Smith by 5-10 feet on the perimeter, he’s still fast enough (and they are still slow enough) to where he can beat them off the dribble and attack the second line of the defense. The Rockets should be able to rotate the trio of Howard, Smith and Jones over the course of the series to where they can get each of their big men rest and dominate whoever the Clippers run out there as their 3rd big man. This might be a series where Doc needs to give Ekpe Udoh some run.

The Clippers' main chance in this series is to try and out-execute a Houston team that could afford to get sloppy against Dallas and expose the Rockets secondary defenders on the perimeter. Crawford came up huge in Game 7 against San Antonio and LA is going to need a similar performance from him, especially if Harden is guarding him late in games. He gives the Clippers a secondary creator on the perimeter (which the Rockets don’t have) and there should be plenty of places for Rivers to hide him on defense in this series.

Brewer is a long and active 6’9 defender and a streaky outside shooter who could end up playing a huge role in the outcome of this series. LA is going to have to give up something on defense and it’s likely going to be open shots and run-outs for Brewer. If he can play as well as he did against the Mavs it could force the Clippers hand on a number of different fronts. Expect McHale to try and unleash Brewer’s calculated insanity against Paul in various points in this series in order to test how balky that hamstring is.