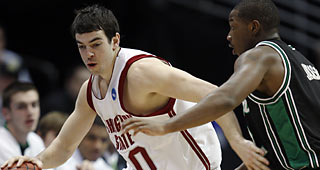 In his third Euroleague season, Taylor Rochestie proved the importance of being patient, consistent until you get to the right place at the right time. After first two sloppy Euroleague seasons with Laboral Kutxa and Montepaschi, the move to Nizhny Novgorod made Rochestie’s career skyrocket. No surprise, Rochestie was the RealGM pick to win the Most Improved Played Award.

Rochestie, who more than tripled his scoring and assists averages during the 2014-15 season, received complete freedom from head coach Ainars Bagatskis and that played well for Nizhny Novgorod, who ended up having Euroleague’s scoring leader on their squad. What is even more impressive, Rochestie won the Alphonso Ford Trophy, which is given to Euroleague's top scorer, while putting his name into the Euroleague history books. Rochestie became the first player in Euroleague history to finish the season with 50-50-90 shooting percentages

Rochestie made 52 percent of his shots from close distance (2PT), 50 from beyond the arc and 93 from the free throw line. The 29-year-old point guard together with Nando De Colo also joined Sergei Chikalkin, Arvydas Macijauskas, Sarunas Jasikevicius and Trajan Langdon in Euroleague's 50-40-90 club.

RealGM caught up with Rochestie to discuss his success in 2014-15 season, experiences while playing for Nizhny Novgorod, his shooting performance, his teammates Trey Thompkins and Artsiom Parakhouski, and much more.

RealGM: First of all, when you moved to Nizhny Novgorod last January and your role increased significantly compared to your time with Laboral Kutxa and Montepaschi, did you expect that the 14-15 season would be this good for you personally?

Rochestie: After a tough couple months in Siena, I quickly found a home in Nizhny. The chemistry of the team, and my role in it was perfect. Having the opportunity to come back to the same team, I was confident that the 14-15 season was going to be great for me. It was the first time I returned to the same club, and I knew what I needed to do, and the player I wanted to be within this team. My sights were set very high.

RealGM: Nizhny Novgorod looked promising throughout the regular season but then kind of fall apart in the Top 16 and finished with a 3-11 record. What do you think your team lacked to perform better and maybe fight for a place in the playoffs?

Rochestie: We lost many close games. Maybe not in the last minute, but in the last five minutes. I guess the experience level kicked in at some moments, then again your playing every night against a great team in the Top 16. Three of our eight teams in the group are playing in the Final Four. We dealt with a couple of injuries, and the addition of new players. Many of the top clubs in Europe have many of the same players coming back, and a deep roster of experienced players. This competition is tough. Overall, I feel we played well, although we had our chances to push for the playoffs, and it's upsetting to let those go.

RealGM: In your opinion, why did things not workout with Laboral Kutxa and Montepaschi?

Rochestie: Well, I had my ankle injury that sidelined me for a while in Spain, but besides that I don't like to look for reasons or excuses to why it didn't work out. I took both of those experiences and learned more about myself, and the game of basketball. I wanted my performance to do the talking for me. I grew up as a player and put myself in a position to be successful and show that i can perform at the highest level.

RealGM: What are the main reasons for your massive improvement in the Euroleague this season? Was it for you just a matter of getting to the right situation?

Rochestie: Again, it was me maturing as a player and a person. Learning from my past years, and understanding more about the player that I can be to help my team and to perform better. I have to give a lot of credit to my teammates and coaches as well. This is a great group of guys to fight and compete with. Our coaching staff gave me an opportunity to show each night what i am capable of doing.

RealGM: You scored in double digits in all 21 games you played in the Euroleague this season. What helped you to maintain this incredible consistency on such competitive league like Euroleague?

Rochestie: It always helps to be on the court. I have to credit my coaches for this as well, trusting me to run the team, and pushing me to stay aggressive throughout the game. Many players can take on different roles for different coaches and teams. I was asked to be more of a scorer this year, and an aggressor offensively. So it helps to be in the right situation.

RealGM: It has been the fourth year in a row that a player from the U.S. has won the Euroleague scoring title. Do you think that means something or is it just a coincidence?

Rochestie: Could be a coincidence, I’ll wait until it is five years in a row until I believe there is a conspiracy. There are great players from all over the world playing in Euroleague. I think each year many players have the opportunity to accomplish what I did. I can guarantee no one thought it would be me this year, so who knows who it will be next season.

RealGM: You are the first Euroleague player ever to make over 50 percent on two-pointers, 50 percent of long range shots and 90 percent of free throws. Not to forget that you are a leading scorer in the league. Could you name most important aspects that lead to this historical performance?

Rochestie: This is what I am most proud of when I think of this scoring title. While some games I took many shots, I was not shooting my team into a grave. I always want to make the right decision. I am not just looking to score and looking to take shots. I think that shows when I look at the percentages, the assists, and the shots I took. I think it has more to do with confidence that focusing on anything else. Its great to see the ball go in, and you can feed off of your own game.

RealGM: Is there anything special on working with Ainars Bagatskis, who was able to help Nizhny Novgorod to turn things around in the middle of the season?

Rochestie: I have said many times in the year, that he has been a huge factor into my success. Offensively, I feel he gives his players the confidence and support for them to be who they are as players. He does not try to limit you as a player, but pushes you to highlight your talents. Along with our assistants, they have great sets, and put the payers in a position to be successful, and that was shown during the season with how well our offense was working.

RealGM: Trey Thompkins and Artsiom Parakhouski are two more players of Nizhny Novgorod who significantly raised their value this season. What was it like to play with them this season and what do you think is their potential in the future - Euroleague playoffs team, Euroleague title contender or possibly NBA?

Rochestie: It was way more that just us three that contributed to the success. Other players on our team may not have received as much recognition, however it really was a team effort for Nizhny this year. For Trey and Art, it was great to watch them evolve during the year. I have never seen someone improve in one season as much as Trey. He is coming off of injuries in the NBA and from training camp he has gained back his confidence and rhythm as a player, and he has an extremely high ceiling and future as a player. Art proved that he is one of the most dominant big men in Europe. He was finishing everything around the rim, and even stretched his shooting range this season. Teams have to double him to control his size and strength, and he can go even further as a player after this successful season. Best part is, that both these guys are great people, personally. That more than anything should contribute to the success in their futures.

RealGM: I was watching your interview from 2010 while you were playing in Germany. When you got asked if you been to some scary places, your answer was Russia. You didn't like traveling there and especially the weather. Do you still have same perception on this country after living there for more than a year? Which stereotypes proved to be right and which were actually wrong?

Rochestie: That feels like forever ago. It is amazing when you travel to play different teams, you see the airport, the hotel, and the gym. After that, you just see whatever route the bus takes to each location. To me, Russia was cold and dark. After living in Russia for over a year, I can tell you... it is still cold! However, I am not surprised at how much I loved my experience and time in Russia. This game has brought me all over the world, and I always go into each situation with an open mind, and no stereotypes. The world has so much to offer, and I am lucky to be traveling and seeing what I have seen.

Rochestie: My goal is to pick off where this season left off. I am continuing to learn from this game and grow as a player. I want to be better next year. This summer is important for me to improve my weaknesses, and come back next season and continue to surprise people. Improvement is my goal. Wherever I am, if I am playing basketball, I will be happy.