A Five-Step Plan To Fix The Nets 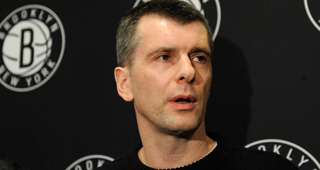 With limited draft assets, a middling roster without much upside and no vision for the future, it’s hard to imagine the Brooklyn Nets becoming relevant anytime in the near future. In short, the Nets are a mess. So this being the internet and all, we took a stab at a 5-step plan to get this franchise back on track.

Step 1: Identify whether Brook Lopez is a player you can (realistically) build a 50+ win team around

There exists a strange paradox in the NBA. Certain players can be objectively “good” -- possess valuable skills, put up impressive-looking stats, etc -- but not be all that conducive to actually winning basketball games. When it comes to looking at bigs in particular, players like Greg Monroe, Al Jefferson and Enes Kanter are all talented, skilled big men that have never really won big. This isn’t to say these three are detrimental to the sport or inherently impossible to win with, just that their skill sets are very hard to build good teams, especially when they are in key roles. And even with those three, sorting out the context of their middling win totals -- it’s not like any of their teams were exactly a Murderer's Row of talent -- is a very complicated process.

The fact that Kanter, a player accused of putting up empty numbers in Utah, is now winning big in Oklahoma City is a perfect example of why it’s so difficult to truly assess this. Kanter is coming off the bench alongside two of the league’s five best players and is often paired with the ideal frontcourt complement given his game (a stretchy, rim-protector named Serge). Figuring out whether Kanter is adding to value to Oklahoma City by finding an ideal role or merely having his previous routine masked by great players is an open debate.

Over the years, NBA.com data has shown us that the Nets are better overall with Lopez, an All-Star in 2013, on the floor, but always noticeably worse defensively. The defensive woes are a real concern but perhaps the most damning evidence against Lopez is how the 2013-14 Nets team took off while he spent 65 games on the sidelines that year with a broken foot.

The goal for Brooklyn is to use the rest of this season to evaluate Lopez and decide whether he can be a cornerstone piece. If the team decides that’s the case, all their plans moving forward need to be surrounding Lopez with the complementary cast he needs to maximize his strengths while subsidizing his weaknesses. If they decide he’s not fit for a major role, Brooklyn should look to offload him to a willing taker as long as it doesn’t cost them anymore assets, they ya know, don’t have.

Step 2: Instead of spending gobs of money on John Calipari or dipping into the luxury tax after another round of free agent spending sprees, use that money to invest in infrastructure

The Nets are off to a good start with their acquisition of a D-League affiliate in the Long Island Nets. Most of the most well-respected franchises in the league (*cough* Spurs *cough*) have established great links with their D-League affiliates in order to advance their player development. Though Brooklyn owner Mikhail Prokhorov hardly has a proven record of substance of style, pouring money into the new Long Island team is the more prudent venture. For starters, higher salaries for the new Long Island staff would, in theory, attract more talented coaches, trainers and performance specialists. Getting high caliber, effective staff there would help facilitate the development of the real assets to the Nets: players (especially when/if a new CBA helps make the D-League a true minor league like in baseball).

In general, Brooklyn should prioritize their performance staff and, in a very simplistic sense, create the same competitive advantage the Phoenix Suns have enjoyed for years to Aaron Nelson and his crew operating in the Valley. And while more and more NBA teams are diving into this area for an edge, it’s still an undervalued, misunderstood and complicated process to get right.

Part of why the Suns staff is so successful is actually something that has nothing to do with money, staff or some cutting edge process. It’s merely the empowerment of smart, skilled people within the organization. Because of their efficacy, the Suns training staff has (to my limited knowledge of NBA franchises) a higher degree input than most. Rumors have floated around that Phoenix players used to (and maybe still are) fined for missing such things as scheduled appointments to get treatment and/or do corrective exercises, the targeted lifts designed to correct the muscular/movement imbalances that increase injury risk.

This is part of why the Suns performance staff has made a name for themselves due to their effectiveness. Not only are those Phoenix guys sharp, but they are empowered to do their job. After all, you can have the most innovative and effective people in place but if they are neutered by the front office or the coach, their effectiveness is severely limited.

For Brooklyn, the goal should be to continue to invest in this area of their basketball operations. Not only that, but creating a cohesive structure so both the performance and training sides work together (it’s not all just about cool technology!). And while most of the focus will be on how crucial the Nets next head coaching hire will be, hiring the right person (P.S. Nets fans, there’s a great option already in New York) to coordinate the performance side could be just as vital. Just ask the Atlanta Hawks about valuable Mike Roncarati is to their success.

If Prokhorov wants to continue to throw money at things in attempt to turnaround this dire situation, it should be aimed at all the areas that help player performance, instead trying to break the bank on players themselves.

Step 3: Go young, focus on character and build a culture

Though their lack of draft picks will make this harder, the goal for this Brooklyn team should be to error on the side of youth when it comes to player acquisitions. It will be tempting for Prokhorov and company to go after players older free agents Pau Gasol, Al Jefferson, Joakim Noah and Luol Deng in an attempt to save face, but that would be a mistake. The backend of every deal it would likely take to land those players out of or nearing the end of their primes will be millstones that will have the Nets in roughly the same situation they are now just a few years down the road.

Instead of going for sage vets that have seen their best days, Brooklyn needs to stick tight to a relatively firm 27-&-under policy (with obvious exceptions). After all, would the Nets be better off overpaying up-and-coming guard Kent Bazemore in this summer’s free agency bonanza or the injury-plagued Noah? Very few players are likely going to match the value of the free agent contracts they’ll receive in great cap spike of 2016, so the Nets would be better off betting on a younger veteran getting better rather than an older one turning back the clock.

Now just sticking to younger players isn’t that simple. It has to be identifying the right young players. Nearly every NBA executive will pay lip service to concept of locking in players that are hard-workers, good teammates and willing to sacrifice to help their team win. When it comes right down to it, however, the vast majority of the league has (and the evidence of this is too long to list) reached for talented knuckleheads over more limited, blue collar players. But with so many tools nowadays to get athletes better both physically and at their craft, it’s time that teams like the Nets stop just paying the notion of character over troubled talent lipservice.

For Brooklyn, the temptation to go after say Hassan Whiteside instead of maybe, Tarik Black (who just seems like an impressive, hard-working kid), is obvious. But the concerns about Whiteside’s attitude and work ethic continue to swirl as his efficacy, despite the gaudy block shot totals and rim-rattling dunks, is also being questioned. Whiteside seems to have the potential as a culture-destroyer while lesser talented players that will be available, will give the Nets team a chance to build an environment conducive to development and, more importantly, winning. And perhaps not in a related-shocker, those hard-working dude typically tend to get better, especially when they are granted minutes to develop, and become the guys everyone then loves to have on their roster (hello Omri Casspi and Lance Thomas).

Every team wants to model themselves after the Spurs, but by making a firm commitment to younger players dedicated to their profession, the Nets could actually do it.

Sorry Nets fans, but Kevin Durant is not walking through that door. The same is probably true for Al Horford, Mike Conley and any other psuedo-star that will have the same financial incentive to play for organizations much closer to winning titles. If the Nets want to be an annual playoff participant without the help of draft picks, they need to prioritize building a deep and versatile roster that meshes together. Because again, there is no realistic free agency scenario that will land the Nets enough top-end talent that they can skate by with substandard production from their bench.

Brooklyn essentially needs to take an approach that focuses from the back end of the rotation up, instead of chasing stars. And they should do so by scouring the globe (D-League, American players in Europe and China) for undervalued players that help them build a roster stocked with productive NBA players from 1-12. In effect, the Nets should look at building themselves into a version of last year’s Bucks team -- a promising young squad whose depth propelled them to a surprising .500 record. (Instead of moving forward from that, however, Milwaukee has since seen that promise fade somewhat as a few offseason decisions, including one I was bullish on, are not working out for them)

Such an approach means that making moves for talented players that don’t fit in with their current roster (should they keep Lopez) or vision for the future (should Lopez be deemed expendable) is not in the cards. The same goes for the aforementioned undervalued players. The Nets need to acquire players with a clear vision of their role -- both presently and long-term -- in mind and make sure it’s not superfluous with other parts of the roster.

Brooklyn should also error on the side of securing shooters whenever possible, especially since Rondae Hollis-Jefferson, the one legitimately exciting prospect on the roster, will need floor spacers around him to thrive before he (hopefully) develops an outside shot on his own. On top of that, nearly every team at the bottom of the standings has some issue with their approach to shots from beyond the arc. Whether it’s their number of attempts -- the Nets join the T’Wolves and Bucks in the bottom three spots in the NBA -- or their ability to convert them -- the Nuggets, Nets, Wolves, Lakers and Sixers all rank in the bottom third of the league -- there certainly seems to be a correlation between teams that can’t (or won’t) shoot 3’s and teams that can’t win.

This one should be relatively simple for Prokhorov and the Nets. All that stuff you did over the past five years? That’s what got you to this point, so, uhh, don’t do that again.