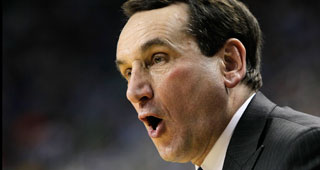 Mike Krzyzewski is famous for mentoring four-year talent but Duke has also become an outlet for elite five-star high school recruits to flock. Duke was eliminated in the Sweet 16 by Oregon, which could have been the final game of many key players.

With Brandon Ingram likely following the same route as Jabari Parker and Jahlil Okafor, as electric one-and-done prospects, and Grayson Allen (Presumed Draft Selection) not donning the blue and white next season, Krzyzewski will have to reload. With an abundance of incoming talent, it won’t be as burdensome-as expectations should be lofty in Durham.

Duke might have one of its most loaded recruiting classes in team history. Ranked No. 2 in both 247Sports and ESPN, the 2016 recruiting class is top-heavy for Duke in landing small forward recruit in Jayson Tatum and an offensive savant at power forward in Harry Giles III.

Duke also signed Frank Jackson, a 6-4, 195-pound point guard who could revitalize a weak point in the Duke rotation. All three could have a profound impact, similar to recent freshman who have thrived in Krzyzewski’s system.

Breaking down the trio, there should be bountiful optimism that the team has the talent to claim the national championship for the second time in three seasons.

Outside of his gaudy numbers as a freshman and garnering a likely top-2 selection, Ingram would be wise to declare for the draft and avoid competing with Jayson Tatum for touches. A senior at Chaminade High School in St. Louis, Mo., Tatum is regarded as the top small forward in the class of 2016, per ESPN.com and DraftExpress.

With rare two-way versatility and a prominent figure in the AAU circuit, it’s easy to see why Tatum is ranked at the top of many recruiting lists.

The 6-9, 203-pound swingman can knock down shots from the perimeter, but is a force creating offense in the paint and around the basket.

Tatum isn’t the next Jaylen Brown or even Brandon Ingram in terms of athleticism, but his feel for the game offensively counteracts his physical limitations. This sequence here illustrates Tatum’s high basketball IQ operating with the ball.

He uses his teammate’s ball screen to crossover and set up a mismatch with Giles having to guard him near the top of the key. Driving to his right, Tatum attracts a double team, sets up his teammate on the baseline with options, cuts to the basket and finishes with contact. Both Parker and Ingram excelled offensively operating around the paint or on the block and Tatum could follow suit as a wing that looks for effective shots.

Tatum might not have the same ideal shooting touch, but is an adept facilitator and someone who can run an offense from right when he steps on campus. He likely won’t be inserted into the scorer role, similar to what Grayson Allen was for the team, but more of a playmaker who can create with the ball for himself and teammates.

Duke could have Luke Kennard (172 three-point attempts last season) or Grayson Allen (216 attempts), if he decides to remain at Duke for his junior year, act as primary gunners, but Tatum is a definite secondary option. He’s flashed the ability to become a three-point asset, but entering college as a volume shooter wouldn’t be ideal for the team or his game.

Tatum will be able to showcase his versatility on a team loaded with talent, featured as a talent able to lock down on his man, grab a rebound and sprint up the court for a fast break finish or a dish. He could have the ability to impact the game in many categories as a starting freshman, a rarity in the college landscape.

Is the ACC and the entire nation ready for the “Man Child?” Harry Giles already looks the part of an NBA power forward, with a 6-9, 230-pound frame that plays on both ends of the floor.

Giles tore his ACL in the 2015-16 opener at Oak Hill Academy (Mouth of Wilson, Va.), but chose to enroll at Forest Trail Academy (Kernersville, N.C.) to finish high school. Based on what he showed at Wesleyan Academy during his junior year, there is reason to believe that he can be a two-way force if he recovers effectively from injury.

Giles overwhelmed players athletically at the high school level, but with an advanced offensive game, he’ll be able to work on and showcase his shooting touch at Duke.

Giles can knock down the occasional triple, but is more of a mismatch in the post-where he can face up or power dribble his way into an easy look. With elite athleticism and burst from the power forward position, he’ll be a problem for most players he matches up against.

Adding more polish on his mid-range jumper could be a focus for the likely one-and-done recruit. He also will be gauged to see how he transitions on the less glamorous end, matching up against ACC bigs. Defensively, Giles’ exceptional quickness and athleticism plays into his label as a two-way frontcourt specimen.

Duke had to shift Ingram to the 4 to mitigate the loss of senior Amile Jefferson to injury just 10 games into the season. However, they’ll have an immediate star in Giles to provide stability at the position throughout the 2016-17 season.

Jefferson could possibly return, if the NCAA grants him a medical redshirt, and start at power forward again, but don’t expect Giles to have serious repercussions from switching positions.

A likely top pick in the 2017 NBA Draft, it will be a treat to see Giles dominate in the post and show glimpses of transcendent ability-barring another significant injury.

Derryck Thornton underwhelmed with immense expectations placed on him as a starting freshman point guard for one of the nation’s most illustrious programs. Averaging just 7.1 PPG and shooting an underwhelming 39.0 percent from the floor, Thornton struggled to acclimate to the Division 1 level.

Landing Frank Jackson, Krzyzewski has another five-star point guard he can utilize so he doesn’t have to turn to a shooting guard (Allen) for the second-consecutive season to run the offense.

Jackson is a mismatch at the point, with a 6’4” frame that allows Jackson to convert passes over smaller defenders and control attacking guards. ESPN.com delves into what Jackson offers to Duke offensively:

Jackson was arguably the most talented young guard in Utah due to his lethal combination of athleticism and skill. He is a gifted scorer who can convert buckets at all three levels. His burst in transition was dynamic and he can finish with either hand.

Scoring from a bevy of areas on the court is essential, as Thornton struggled from deep and shooting two-point jumpers as a freshman (32.9 percent). Jackson could get the starting nod to open the season and amplify Duke’s effectiveness as a unit.

You could see the drop off at point guard from Tyus Jones in 2014-15 to Thornton last season, but Jackson has the offensive ability to help revitalize the position. Defensively, he has to remain active and motivated-as Jackson’s offense will fuel his playing time at the point.