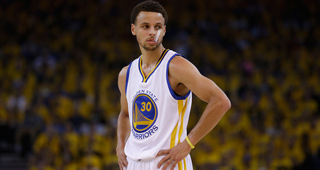 Instead of a coronation for Stephen Curry and the Golden State Warriors in the playoffs after his historical individual season and their record-breaking 73 wins, we have begun to see a momentary preview of a future when he begins to physically decline. Curry injured his ankle in Game 1 of the first round and then suffered a more serious MCL injury when he returned in Game 4.

Curry returned in Game 4 of the series against the Blazers, missed his first nine three-pointers before recalibrating towards the end of the fourth quarter and then scoring 17 points in overtime. Curry has remained exceptional, but he has had to adjust his game in subtle ways to compensate for the injury. He is playing more like 32-year-old Steph than peak powers, superhuman 28-year-old Steph.

Winning MVP for the second straight season and taking such another implausible leap forward, you could make a realistic argument Curry also deserved to win Most Improved Player. Even though it feels improbable, Curry could be even better next season. He is at an age in which the overwhelming evidence shows most players reach their apex where they are perfectly balanced in the athleticism of what they can do and veteran enough to know how to do it. If Curry’s not at the ceiling of his powers, he would be defying the limitations of what’s possible even more than he already has.

Without transforming his body and developing one of the game’s greatest handles, Curry doesn’t go from best ever shooter to best offensive player in the NBA. Those two things allowed him to pair his perimeter shooting with one of the game’s most imaginative and creative playmaking skillsets. The previous comparisons were always more Curry-adjacent than Curry-actual, but those became worthless this season and Curry formed his own category.

There is a paradox in how players who don’t necessarily rely on their athleticism as the main part of their greatness age. Players that are who they are because of their skill level can render a high version of themselves for a long period, but they still suffer a physical decline and it matters at what peak that decline is beginning from. LeBron James has been one of the game’s most athletic and most skilled players, so even a normal trajectory of physical decline could keep him at an All-Star level in his early 40s, which would be unprecedented for a non big. Curry is starting from a lower point athletically, so the margins of how he's operating have always been slimmer and will matter more meaningfully.

In the vacuum of an empty gym, Curry’s shooting won’t ever really decline, but there definitely will be more of a struggle in generating clean looks. Curry can’t simply be clutching to his shot to sustain his greatness. There will need to be fragments of what he’s doing now, whether through his own skill level with the dribble or the scheme of the offense, to be an acceptable facsimile of the Curry of today.

One of the key elements of the move from Mark Jackson to Steve Kerr in 2014 was getting the ball out of Curry’s hands more frequently to have him instead come off screens for catch-and-shoot attempts. The Warriors’ offense is designed to immediately put pressure on the defense with their pace, the chaos of cross-matching and the threat of a quick three-pointer or layup. If nothing’s there, the Warriors then want to make the defense go through repeated rotations until they make a mistake to create a high efficiency shot opportunity. Curry's two MVP seasons have been the perfect melange of system and talent.

When Curry loses his quickness off the dribble, he will be more dependent on the Warriors’ system to facilitate his offense. Golden State will place even greater emphasis on their bigs to set him up with a dribble handoff that is essentially a pick and roll than they do already. Extraordinary passers like Draymond Green, Andre Iguodala and Shaun Livingston become even more indispensible parts of Curry’s offense.

Defenses are already trying to run Curry off the three-point line, inasmuch that's possible and he has developed the ability to score efficiently driving all the way to the basket. This is the aspect of his game that will fade first when he’s not quite as explosive. The level of athleticism Curry possesses doesn’t jump out at you quite as easily or readily as other players since these are layups instead of dunks, but a 360 degree look at one of these drives from Game 2 perfectly shows how complicated a move it is on a physical level; one he won’t be able to still do into his mid-30s.

Curry will incrementally rely more on operating in the mid-range around the elbows the way Chris Paul does on possessions where the three-pointer is taken away. Curry shoots very few mid-range or long-range two-pointers at this point in the career and it is a big reason why he’s reached an MVP level last year and a unanimous MVP level this year. Curry’s percentage of two-point attempts has gone from .668 as a rookie and decreased every single season since, reaching .446 in this one. While he’s attempting fewer two-pointers, he’s also been progressively making a higher percentage of them in each season up to .566 in 15-16. Curry is generating high percentage layups and floaters out of the gravity of his shooting and the athleticism of his drives. Curry is the king of the three-pointers, layups and free throws strategy.

Maybe Curry will even invent new ways of scoring like his Game 2 bank shot three-pointer against the Thunder that will become his version of the Tim Duncan bank shot in the mid-post. Maybe Curry keeps shooting more and more 30+ footers at a 50 percent clip. Maybe Curry will be a high usage, perimeter scorer who can improve upon his .669 True Shooting Percentage this season and hit .700. Curry is one of the game's most dedicated perfectionists and will always work to improve and refine his craft.

Curry’s assist percentage dropped significantly from last year (38.6) to this year (33.7) as he became even more of a scorer. Curry will never be a ball dominant point guard again for as long as he plays in this type of system; assists and touches are too evenly distributed amongst the entire team, but will he shift into more of a pass first, shoot when open point guard like Steve Nash’s MVP seasons, or does he get even fewer primary ballhandler responsibilities and become more of a shooting guard coming off screens like late career Ray Allen?

The final question of Curry’s longevity to confront is his defense. The Warriors are masterful at playing the weaknesses of certain opposing players off the floor and Curry’s eventual liabilities on defense are likely to be more of an issue before the defense. If Curry is unable to retain his lateral quickness, he will have a tough time staying in front of younger point guards. Curry is an underrated defensive player right now, but he’s usually given the easiest assignment and doesn’t need to exert much energy to be a competent component of the Warriors’ scheme on that side of the floor. Curry’s offense will always outweigh his defense but his physical decline will manifest itself in certain ways perhaps here initially. If the NBA continues to go smaller, Curry does have enough length at a legit 6’3 to defend a lot of wings who are even primary or secondary scorers, especially if he gets stronger.

Curry was 25 when he first became an All-Star so he’s a late bloomer when it comes to reaching his prime as a player just as he was older than most NBA players in his physical development. Because of his shooting and basketball IQ, Curry should have three or four more seasons of MVP-level production before a slow decline into his late 30s and possibly even 40s if he proves to be less fragile than he's always seemed (hence the Baby Faced Assassin nickname) and avoids any catastrophic injuries, depending on his level of pragmatism for the adjustments he makes in the mid-range and how the system he plays in evolves to account for his physical limitations.