Inspiration And Gloom Collide As The Wolves Return To The Playoffs 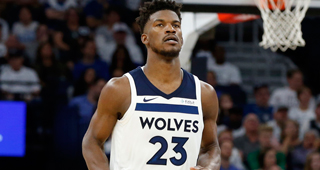 You probably don’t remember what you were doing on May 31st, 2004. Chances are that you were cherishing the summer air and feeling emotional as you listened to “Burn” by Usher for the tenth time in a row. You were probably feeling secure in the knowledge that the United States couldn’t possibly ever elect a more embarrassing President than George W. Bush. You know, normal stuff, normal thoughts.

But if you happened to be a fan of the most successful Minnesota Timberwolves team in franchise history, this was of course a day that would live in infamy. The Los Angeles Lakers dashed your postseason dreams yet again. But that happens. The Wolves would be back next year. Except of course they weren’t. Or the year after. Or the next twelve years. And it wasn’t a quiet fourteen years of silent Midwestern misery either. No, the Timberwolves have been so gross and so depressing for so long, it’s become difficult to imagine them as anything else, even though they are now in fact a winning team with several likable players (also Derrick Rose).

Their return to the postseason therefore ought to be a joyous occasion, not just for their fans who obviously love and support their team, but for empathetic humans in general, who should feel buoyed by a perennial loser’s inspirational conquest over the cast iron grip of fate. But somehow it just doesn’t feel quite joyous yet. There’s just something off about these Timberwolves. You can feel good for them in the abstract, but also feel strangely certain that they have that ineffable scent of just sort of being a cobbled together bummer.

It’s been a season-long struggle to keep the mood surrounding their most successful team in fourteen (!) years from getting too sour. Jimmy Butler’s injury obviously had an impact on the team’s performance and yes, almost certainly their final position in the crowded lower-half of the Western bracket, but that weird off-putting sensation these particular Wolves were generating had already taken root. Their fans were clearly frustrated. One could peruse Timberwolves Twitter and get this feeling that Minnesota fans were drunkenly punching walls and smashing glass during every game, no matter the outcome. Their team with a winning record wasn’t quite winning the right way. They should be winning more. They should be winning more elegantly. The pace is atrocious. Why do they take so few three-pointers? How dare anyone say something unkind about Andrew Wiggins? This team, frankly, was good, but they were supposed to be better. After hiding so long in the wilderness of quasi-irrelevancy, they deserved better wins. Prettier wins.

Even the circumstances of crashing the playoff ceiling should have felt absolutely epic. This was win-or-go home trench warfare between two teams that weren’t supposed to be in this position. This current incarnation of the Denver Nuggets are the anti-Timberwolves in certain ways and pitting them against one another on the final night of the season highlighted that divide. The Nuggets, when engaged and operating at full power, might upset a contender in the first round. The Timberwolves of course were just happy to be there. Denver’s status as an NBA hipster favorite is well established. Jamal Murray and Gary Harris are a beloved indie backcourt that were moments away from signing to a major label and gaining mainstream adulation. The entire nation of Serbia lives and dies with every absurd Nikola Jokić no-look pass. Will “The Thrill” Barton is a delightful throwback. The Nuggets were another underachieving team wobbling towards destiny, but they just, how to say this without sounding like an idiot, pulled it off better. They had to win all their remaining six games to seize their playoff spot and they had won five of them. And then Tom Thibodeau and his Bulls Version 2.0 showed up. The game was equal parts The Sandlot and the Peloponnesian War. The beauty of Naismith’s game for rowdy kids merged with agony only squads led by coaches like Tom Thibodeau, Mike Malone, or King Leonidas of Sparta can provide. The Nuggets made a valiant last stand, but obviously it wasn’t enough. They were not the team of the hour. The Timberwolves, who had been eliminated by the Lakers by six points fourteen years ago, defeated the Nuggets in overtime, by six points. Cosmic restoration.

Much of the lukewarm reception of the Timberwolves can be safely laid at the door of Tom Thibodeau, who remains a grouchy basketball coach. One that is definitely competent and sometimes even good at his job. But he’s no mystery, no Rorschach test of hoops ideology. The only way your mileage may vary on Thibodeau is if you believe his histrionics and intensity is grit or insanity (the man once received a technical foul for yelling at his own player). As President of Basketball operations, he pulled the plug on the Ricky Rubio years, replacing him with the decidedly anodyne Jeff Teague. He traded for Butler, a Top-15 player, which believe it or not, usually helps bad teams become less bad. So, to not make the playoffs in his second year would have been an incalculable disaster. Disaster averted!

The Wolves were an obvious mess and now they are a different sort of mess, but at least a mess that is very capable of winning more than half their games. The goofy adage says something like “winning cures everything” but once you join the club of “winners” all sorts of different genres of winning begin to crop up. Good wins, bad wins, impressive wins, disgusting wins, Pyrrhic Victories, wins that are actually losses, Conference Finals flame-outs, and on and on. The culture of winning demands staying a winner until the moment it’s time to tear it all down and Thibodeau’s history suggests the furious attempts to win will continue at the expense of a new generation of broken bodies. You get what you signed up for with Thibs. He’s going to play his key guys until their knees turn to dust or their ankles explode. He’s imported some of his former Chicago workhorses for this express purpose. His Bulls were once a nice wholesome story, but the story is long tainted now. The injuries, Derrick Rose’s sexual assault case, the hideous aesthetics, a stubborn disrespect for the modern pace-and-space formula, foul mismanagement.

There are of course numerous reasons one should get behind this team. The memory of Flip Saunders. Minnesota’s righteous status as our only state that refused to vote for Ronald Reagan. Jamal Crawford is a light in the darkness. Then there is the quiet philanthropic heroism of Gorgui Dieng. And while the national hype-machine has largely moved on from Karl Anthony-Towns, the young giant is still only 22 years old. He continues to naively assume pump fakes are made in good faith and he’s out of position constantly, but his offensive game remains a beguiling combination of doltish and wise beyond his years. And of course, their fearless leader is Jimmy “Buckets” Butler, a plebeian butcher, a man we’d all probably gladly follow into battle. And still there’s something missing. Something off. Something keeping our full-throated support somewhat in check. And that’s bizarre because what they’ve gone through is about as miserable as professional sports franchise can endure.

Minnesota’s decade-plus diagonal crawl towards the postseason played out like a Werner Herzog fever-dream. A brief history of the fourteen-year playoff interregnum should immediately evoke pathos. It’s like Old Yeller being shot again and again and again. The Wolves being straight hustled by the Blazers for Brandon Roy. Kevin Garnett immediately winning a championship for a much more celebrated and entitled city. Politely clapping for lineups featuring Rashad McCants, Sebastian Telfair, Randy Foye, and Ryan Gomes. Losses, losses, more losses. Every kind of loss. Over and over. But hey, that’s just rebuilding. You scheme and you shoot your shot. Sometimes your best laid plans explode in your face and sometimes you get lucky and they explode a few years down the line. The Wolves never really caught a break. Credit where credit is due however, they did swing a draft-night swap of OJ Mayo for Kevin Love. That obviously worked out very well for them inasmuch as Kevin Love is the better player, though to be fair, OJ Mayo led the Timberwolves to exactly as many playoff berths as Kevin Love. Which is only to say that even when they made the right move, it didn’t matter. They were in Hell.

Then came the galaxy brain machinations of David Kahn. Jonny Flynn’s tragic smile. Putting up with Kurt Rambis and his obsession with Phil Jackson’s favorite shape. The fraught relations with Kevin Love. The false starts. The flame-outs. The passing of Flip Saunders. This is Book of Job stuff. Real bone-deep misery. This is the sort of torment that douses your brain in gasoline. Rabidly supporting a professional sports team based on geographical proximity is irrational enough, but the social contract between team and fan generally supposed to be a two-way street. Timberwolves fandom was a haunted cul-de-sac. Until now. Now it’s a two-way street with supposed access to a highway. Still haunted though. They did it. They really did it. They avoided the dishonorable 9th seed. The Timberwolves are back, baby. Hear them howl.

And what a reward the Houston Rockets are! That’s life. Sometimes winning means winning and sometimes it means begging to be let into the slaughterhouse. Despite having lost to the Rockets all four times in the regular season, the allure of the playoffs includes resetting the clock to zero. Those losses have vanished into the ether, and now, before tip-off, a brief moment of optimism can be cautiously savored. The Timberwolves could theoretically still acquit themselves nobly and perhaps steal one by grinding out an ugly win. You never know what will happen. James Harden might come down with a case of diarrhea and that alone could alter the course of history. But one doesn’t game-plan for miracles. The Rockets are sublimely talented, indelibly haunted, and fiercely angry. They aren’t here to acquire new participation trophies or to give a shit that the Wolves have managed to break their 14-year curse. This series feels like a four-part curb stomp. And that’s fine, as far as that goes. There is of course no moral component to being swept. Sweeps happen. Sweeps are as natural as birth, death, and loudly complaining about taxes. The Wolves are just glad to be there, just glad for the opportunity to be get knocked around on national TV. That builds character.

But still, this heralds an arrival. Flawed and clunky and off-putting as they’ve been, it doesn’t feel as though we’ll have to wait another fourteen years to see them again. And that’s a good thing. A brand-new existence of post-season aggravation that had been forbidden from Minnesota’s supporters for five-thousand and sixty-seven days is about to reveal itself. This is the very first time Twitter will get to experience the Minnesota Timberwolves in a playoff series and now that they’ve made it, perhaps some of the angst fastened to this team will have sloughed off. They made it this far, and that counts as a massive victory. Most teams make their triumphant return to the playoffs after a few years in purgatory, or in strange cases like the Sixers, a few years in Narnia. The Wolves have been in Hell. And despite whatever reservations we might have over yet another imperfectly constructed group of basketball players, we should always celebrate when someone manages to crawl out of Hell. It’s only good manners.

Alex Siquig is a contributor at GQ, VICE, The New Yorker and elsewhere.