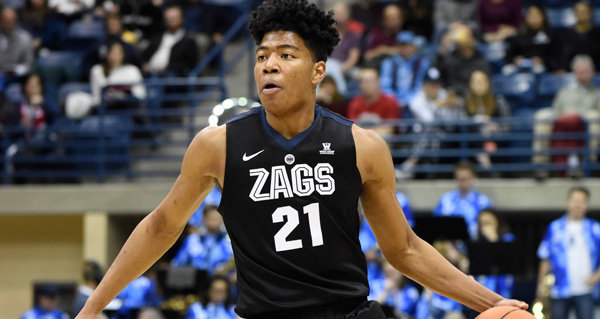 Rui Hachimura logged just 127 minutes as a freshman [1], which was certainly reasonable given his circumstances. His transition was unlike most we tend to see, as he jumped out of Japanese high school to a high profile program in the US – a Gonzaga team whose strength upfront was the difference in them making it all the way to the national title game that year.

Looking well adapted as a sophomore, the six-foot-eight combo forward was fully integrated as a key rotation cog in his second season – logging 25% usage rate in his 766 minutes, with Gonzaga deploying him as a wing quite a bit and sending him to the post often against overwhelmed West Coast Conference competition.

Hachimura excelled at that level – averaging 22.4 points per 40 minutes [2] on 62.3% true shooting and putting together a 23.7 PER in 37 appearances. With such numbers and looking like the exact sort of big wing the NBA craves right now, the 20-year-old [3] is currently ranked 14th on the ESPN’s latest mock draft.

But a more detailed look suggests Hachimura might be a bit overrated at this point. He hasn’t developed particularly impressive dynamism handling the ball from the perimeter against a set defense, isn’t a reliable shot creator for others and doesn’t offer spacing as a weak-side spot-up threat.

On the other end, the Meisei High School alum puts in the effort in individual defense and can execute the basics away from the ball. His rebounding is okay too. But he doesn’t play with a whole lot of intensity flying around to create events and it’s unclear how much versatility he truly offers.

Hachimura got quite a few touches with his back to the basket and managed to get consistent deep position against most of the opposing wings he played against.

The Sendai, Miyagi native hasn’t shown power moves to back his way into close range bunnies or much in terms of head fakes, shot fakes or fake pivots to work his man out of position. His basic approach was pretty effective, though. He did well on quick hooks with either hand, turnaround lean-in jumpers and righty lay-ins – converting 47.8% of his 90 two-pointers away from the basket, with 22 of his 43 makes assisted [4].

Hachimura’s 230-pound frame also invites a lot of contact and earned him trips to the foul line in volume – averaging 6.8 free throws per 40 minutes last season.

But while he proved to be a very capable one-on-one scorer, Hachimura didn’t show much of a feel for finding cutters and shooters relocating around the opposite wing.

He seems to be at this best catching the ball on the move against a scrambling defense.

Hachimura has shown to be an instinctive cutter and capable of finishing lobs filling the lanes in transition but impressed the most with his fluidity on straight line drives out of roll-and-replace, as he is able to get from the top of the key to the rim in one dribble. He has long strides and can maintain his balance through contact thanks to the strength in his upper body.

Hachimura took two-thirds of his shots at the rim and has flashed some explosiveness going up strong off one foot in traffic, besides off two feet with some space to load up, but has only a basic finishing package at this point of his development – converting his 164 attempts at the rim at an unimpressive 58.6% clip, with less than half of his makes unassisted.

Hachimura is a poor shooter as of now. Though he did flash some potential on a few quick catch-and-shoot mid-range jumpers out of the pick-and-pop, Hachimura is not a threat from beyond the arc – missing 19 of his 26 three-point shots last season, at a pace of just 1.6 such attempts per 40 minutes.

His shot doesn’t seem to be broken, though. He catches on the hop, gets good elevation and fully extends himself for a high release. There is work to be done on elbow placement but his 79.5% shooting on free throws suggests he has the touch to become at least a much more capable threat on open spot-ups in the near future.

Against a Set Defense

Hachimura has been a limited shot creator against a set defense at the collegiate level.

He hasn’t shown much in terms of dribble moves, doesn’t have a whole lot of side-to-side shiftiness and can’t blow by his man on speed, though he can bully his way forward on strength and pivot into a decently-coordinated spin move.

His vision isn’t much either, as he often drives into crowds and hasn’t been a capable passer on the move – assisting on just 5.5% of Gonzaga’s scores when he was on the floor last season.

As the opponent often played shell defense when he isolated from the top, Hachimura had to settle for some stop-and-pop pull-ups. Though there was the eventual dribble-in pull-up three-pointer when left completely open and given time to load up his shot, he didn’t show much dexterity rising up off the bounce.

His floater isn’t much of a weapon yet either.

Hachimura bends his knees to get down in a stance and has a couple of lateral slides in him to stay in front of similarly-sized players out in space. He is also capable of chesting up and containing dribble penetration through contact when engaged, though it’s still unclear how he’ll hold up against more athletic competition.

Hachimura showed some potential versatility, as he was asked to pick up smaller players on switches from time-to-time. He is not an option to cross-match onto these types for entire possessions, as he is unable to go over picks at the point of attack, but did seem like a viable option to play credible one-on-one defense out on an island. He is unable to stay in front of shiftier guards when stressed side-to-side but can keep pace with them on straight line drives and go up strong to block the eventual shot defending on the ball.

His most encouraging work on this end was defending as a big man, though. He is attentive to boxout responsibilities and proved to be tough enough to get physical with true big men – fronting the post to deny easy entries, playing stout post defense if the ball was eventually entered and fighting for position on the glass, collecting 18% of opponents’ misses when he was on the floor.

Hachimura also did encouraging work defending the pick-and-roll, not only executing basic show-and-recover’s with impressive fluidity but also proving he is capable of stopping the ball in drop-back defense.

However, he was hit-and-miss as a help-defender and doesn’t seem ready for the responsibility of anchoring a defense at center, even for small stretches, often missing rotations that called for him to step up to the front of the rim as the last line of defense or come off the weak-side to act as a regular shot blocking threat – averaging just one block per 40 minutes last season.

As a weak-side wing defender, Hachimura was also only so-so. He keeps his stance off the ball and gets his length into driving lanes from time-to-time but hasn’t shown impressive instincts making plays on the ball – averaging just one steal per 40 minutes.

Hachimura can execute basic stunt-and-recover’s and puts in the effort to hustle on sprints to the three-point line. At his best, he is capable of bumping the roll man and run the shooter off his shot. At his worst, he flies by on closeouts and opens up a path for the shooter to attack the lane off the bounce.

[1] According to our stats’ database