The Volatility Of Pascal Siakam 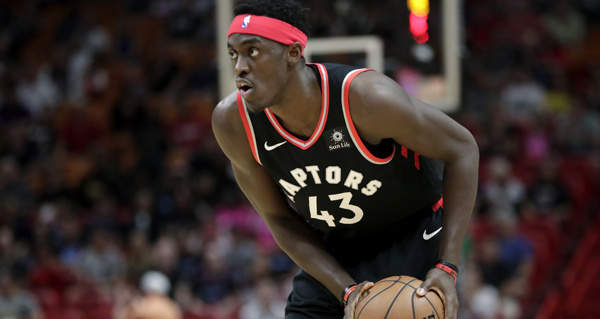 All season long, Pascal Siakam has functioned as the Raptors’ Break In Case of Emergency option. If things weren’t going well, if the team needed an extra push to pull out a victory that looked to be falling away, it was then that Siakam would assert himself and often look like the best player on a team that already had two All-Stars on its roster. Now, in The Finals, where things are implicitly quite high stakes, these appearances need to become more reliable than random.

It often takes a while to accept that a player that previously had been a bit player, or a tad underwhelming in the past, has turned a corner and become a star. All last season, even as he proved himself night after night, I kept waiting for Victor Oladipo to return to the less spectacular form he had showcased in Orlando and Oklahoma City, but it never came. Players have to assert themselves as stars again and again, every night being a referendum, and never are they graded on a harsher curve than in the postseason. Even so, many fans and analysts are telling on themselves a little bit when they express surprise when Siakam plays a great game, as he did in Game 1 of The Finals, scoring 32 points, going 14-17 from the field. It immediately becomes quite clear who has and has not been watching the Raptors play this season.

The full range of Siakam’s skill set also seems to be under appreciated, as few seem to realize just what sets him apart from other athletic bigs who can shoot three-pointers. It’s going to be a bit tragicomic watching teams reach on rangy, long bigs in the next few years hoping to unearth the next Pascal Siakam, failing to recognize how unique of a player he is. Yes, he is tremendously skilled at converting near the basket — making over 72 percent of his shots within three feet of the hoop per Basketball-Reference — and from the corners where he converted over 41 percent of attempts there, but simply focusing on his scoring ability undersells his playmaking ability, his ability to create shots both for himself and others. Watching Siakam slither from the perimeter in order to create a shot at the rim evokes thoughts of Kevin Durant, as few men his size and length can take defenders off the dribble with such ease. He is also a tremendous defender who can disrupt opponents with his length alone, to say nothing of his agility and ability to switch across positions.

Despite the fact that Toronto does not run many plays for Siakam, he still averages the second most shot attempts on the team this postseason with over 16 per game, which is a testament to his ability to create his own shot opportunities through savvy cuts, offensive rebounds, and dribble drives. He is an insatiable player full of energy, who simply needs to figure out how to harness it in the best possible way in these Finals. The shots will be there, he just needs to convert them. Of course, being guarded by Andre Iguodala and Draymond Green does not make things easy.

Siakam, despite being a central part of what makes the Raptors as good as they are, despite being crucial to their chances of unseating the Warriors as NBA champions, is still not talked about as the star that he clearly is. Perhaps part of this is the inherent inflammability of his game, the fact that he is not quite the steady player who can deliver every single night as a player like his teammate Kawhi Leonard can. Kawhi obviously is the focal point of the Raptors’ success this postseason as he has strung together a number of playoff performances as impressive as anyone this decade not named LeBron, Dirk, or Kevin. Yet that very stability makes him almost easier to account for, if not easier to stop. Opponents assume Leonard will score twenty to thirty points per game, and hope to make those points come as uneasily as possible while seeking to stifle contributions from other players. Siakam, though, comes in waves and bursts. You can’t quite count on him every night yet, though on the nights he does show up in a major way, the Raptors are as close to unbeatable as any team can be. He has scored 25 points or more five times in the postseason, and unsurprisingly, the Raptors are undefeated in those games. In 12 such games in the regular season, the Raptors were 9-3.

The problem is that despite these big nights, he has also scored less than 10 points on three occasions this postseason. While they won two of those games, one victory was buoyed by 39 points from Kawhi while the other was possible due to 48 points from the triumvirate of Fred VanVleet, Norm Powell, and Serge Ibaka. While such performances could happen again, you would much rather count on a solid performance from Siakam than have to rely on an outstanding one from someone else. The variance in his play is hard to explain or make sense of, but Siakam needs to find some semblance of stability, enabling the rest of the Raptors to feel secure and to ensure that good games from other players do not go to waste.

If the Raptors are going to win the title, they need the best version of Siakam to show up. Only in his third season, and in his first playoff run as a starter, there is a considerable learning curve that he faces, but it is one that he has shown himself fully capable of scaling. Siakam has been the Raptors' silver bullet all season long, shining quite brightly albeit intermittently throughout this postseason. The one thing missing is a measure of consistency to go along with his dynamic play. Considering how imposing the Warriors are, even when not at full strength, it’s possible the Raptors could still lose even if Siakam does achieve this blend, but it’s very hard to imagine Toronto winning if he fails to.