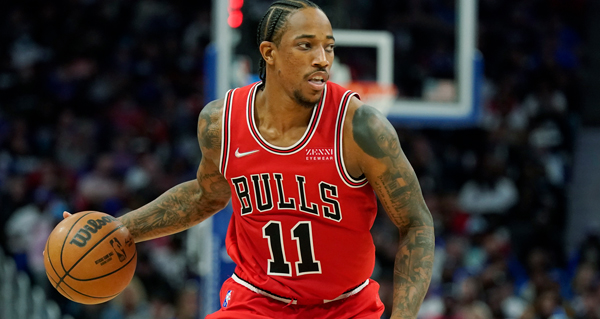 The NBA spectrum, viewed often as a rigid line that starts at the Draft and stretches for five to ten years with milestones like Rookie of the Year, Most Improved, Most Valuable, and then suddenly tapers to a desolate no man’s land of unfulfilled expectations and YouTube videos narrated by angry nerds set to royalty free piano samples with titles like, “Former Stars That Look Completely WASHED,” is a dour one. It’s also a void where everything eventually merges, perspective lost.

It can be difficult to resist placing athletes on the frenetic spectrum of the NBA because with how fast things change from one week to the next in standings, performance, recency bias, health, general vibes and actual metrics our brains scrabble for purchase wherever they can. There are some players though for whom the spectrum will not hold. Whether they’ve been jostled around on it so much there is no reliable place for them so they hover, at all times, beyond its reductive gravity or because they work quietly and steadily under its keepers’ one-dimensional radar — DeMar DeRozan is both, and more.

But DeRozan also talks back to the void. Rare in a sport that generates so much discussion because the conditions for it require a sense of total disconnect, that the person being ranked or rated maintains no awareness that it’s happening. But the scope of DeRozan’s career is just that, a magnified point of precision on the past with both feet in the present, straining toward the future. A bullseye, a ball and a hoop, concentric objects, whatever the scale the shape is always the same for him, it’s a circle.

To come full circle is an idiom we owe, like a lot of them, to Shakespeare. Go farther back from where he used it in King Lear to where he plucked it from Ancient Rome’s mythical goddess of luck, Fortuna, and find the comparative points to DeRozan better fitting than a destitute and raving king. Set in a circle, often pictured holding a ball, she governs the four stages of life in its Wheel of Fortune. She can bring good luck or bad but doesn’t aim to hold a balance between them, being prepared for her gift is the main thing.

Here is DeRozan, seeing his future clearly in Toronto, then with a wink and a handshake he’s sent to San Antonio where he relinquishes any previous concept he had of control. He necessarily hardens. Shorn of any leftover emotional weight and in-game baggage and bad habits of the Raptors in that austere Spurs system. He cuts a solitary figure, strange for him so long twinned with Kyle Lowry as leaders and each other’s shadows in Toronto, for three seasons. Then, without warning or premonition, he winds up in Chicago. The league, the cacophony of voices sounding from the void, don’t seem ready, but DeRozan is. These are roughly three arcs of a circle and this next stretch in Chicago will close it. It won’t be his entire career by any stretch, but it will be, up to now, the best and most deserving kind of deliverance a player like DeRozan is owed.

Last year’s ESPN rankings, prophetic as a palm reader shop in a third-floor walkup, ranked DeRozan at 82d in the league, his soon-to-be teammates Lonzo Ball at 54th and Zach LaVine 56th. All lists are arbitrary, but the ESPN rankings seem to glean information not from eye test or analytics, but secondary sources, like word of mouth or tea leaves, for how far removed from in-game mechanics. DeRozan was two months into his third and dutifully productive season with the Spurs then, a stretch that had his assist rating career-high and top-10 in the NBA, with his best field goal percentages and career-high rebounds. With a young Spurs team he settled into a comfortable playmaking role and his game was as solemn as ever, so maybe that’s why. As much as he’d’ve liked to see himself placed higher, it was DeRozan taking a backseat with the Spurs that made the Chicago trade so timely. The Bulls, reforming under Billy Donovan and with Lonzo Ball en route, needed a leader but couldn’t sacrifice production. In DeRozan the franchise gained a pressure-tempered hybrid, a player who had severed himself from his ego but remained profoundly competitive, who could still cut, drive and roll to the basket with a snarling exactitude, but picked up the ability to make hair-trigger calculations when it came to passing, to giving up a good shot for the better one even if it took the ball from his hands.

What rankings and spectrums aren’t equipped to capture is what’s existential, and is where DeRozan grew the most during that monastic time in the Alamo. The long-guarded, circumspect aspects of his personality seemed to fall away as DeRozan opened up about his mental health struggles and his feelings over the way he was dealt from the Raptors. The former gave new and needed pathways for the athletes coming after him to acknowledge their own mental states and the latter was just as valuable, giving language and a shape to the harsher, harder sides of the game neatly tied up in the phrase, “it’s a business.”

There was a time when DeRozan having the ball in his hands with single digits on the clock would’ve been, was, a nightmare. Toronto fans still feel haunted by repeat years of shots blocked or never falling in crucial playoff games like lurching deja vu. For DeRozan to be the first player in NBA history to make two buzzer-beaters in a row, for that reason, seems the best example to point to for his coming full-circle. What makes it better is the years of work that went into those short seconds.

Asked after the Wizards game where the thought process that allowed him to shake his defender, drop back to wait for the brief gap between bodies flying by him, lean back and put up the shot came from and DeRozan was meticulous, “Years in the league. Understanding your footwork. Understanding the angles you can get your shot off. Separation. Having a complete, full feel of your abilities and what you’re capable of and the options you have out there in the time that you have.”

In Indianapolis the night before, DeRozan called the buzzer beater going in a “relief” after a physical game where he noted nothing felt like it had been going the Bulls way. DeRozan said he had feeling it would come down to the last possession, and seemed to prepare accordingly to wait the clock out — languidly hanging around at halfcourt as time wound down by the millisecond.

“I’m a firm believer that as long as I got time, I got a chance,” DeRozan said of the wait, “I always take that approach into a game.”

In Chicago he has the time he needs, and the patience to reap it. The Bulls were not supposed to be on as an accelerated road to postseason contention as they now find themselves, and rife as its been with COVID protocols cutting into the roster the team has stubbornly persevered. At the end of the summer it looked like a group of castoffs that would need some time to sort out how they fit together — Alex Caruso dropped by the Lakers because of budgetary concerns (like King Midas saying he was hard up, honestly) and Nikola Vucevic a little bit forgotten in Florida, and Ball mirroring DeRozan in some ways as a lone wolf on a disparate Pelicans team. Now, halfway through the season, and they’re all easy intuition and engine.

Ball hasn’t yet had the chance to play as part of a well-working, touch-sharing duo and DeRozan, who played some of his best seasons as one of two, needed to learn who he was as an individual player first to get back to one. Donovan got them both at a time where those distinctions, to the right eye, was clear, and for a coach who was so long used to making short term asks of tall talent with the Thunder, was ready for something to stick and endure.

That the impression of coming full-circle can be applied to many aspects of this Bulls team is partially narrative, but the numbers so far bear out. DeRozan is shooting on track to match his best season, 2016-2017 in Toronto, averaging 26.9 points per game compared to 27.3 then, and the Bulls, at 53.9% effective field goals, are 4th overall, up from 10th last season. The team’s true shooting percentage, at 57.6, trails only the Jazz and the Warriors, and their offensive rating is 5th overall.

Sustainability for the rest of the season and into the playoffs would be a fair concern if the Bulls, and DeRozan, had ever been considered contenders in the first place. The most dangerous and often inexorable teams are like forces of nature, operating within the bounds of the conditions that created them, unaware, or unconcerned, with false restrictions like expectations. DeRozan, in Chicago, has come into his power like the sun showing up in the eye of a hurricane, there all along but waiting, patiently, for the circle of fortune to form up around him.