Why The Players Will Likely Be The Side To Budge 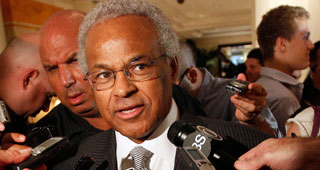 Since locking the players out almost two months ago, the owners have shown almost no interest in coming to the bargaining table. Their unwillingness to negotiate suggests they don’t think the players have much leverage. That, when push comes to shove and the threat of missing an entire season’s worth of paychecks become real, the players will fold just as they did in 1999.

Pursuing such a strategy means there is almost no chance there will be a full 82-game season. If the bargaining power of the players is as weak as the owners believe, there’s likely to be an abbreviated season similar to 1999, which was played after the owners pushed through what was widely seen as an extremely management-friendly CBA.

Despite strenuous objections from the union, including a profanity-filled shouting match between David Stern and NBPA head Billy Hunter, the owners instituted a maximum annual salary as well as a rookie wage scale in 1995. After a few months of posturing, David Stern declared their wouldn’t be a season if an agreement wasn’t reached by January 7, cracking the players resolve. As Phoenix Suns star guard Kevin Johnson told Newsweek: “About 60 percent, if not more, of the players were just ready to throw down at [the January 6 meeting] if an agreement hadn’t been reached.”

The players dilemma was summed up by two infamous quotes from the NBA’s veteran leadership. Patrick Ewing, the union president, admitted that “[the players] make a lot of money, but we spend a lot too.” Kenny Anderson, meanwhile, said that he was considering selling one of his eight luxury cars because of financial concerns.

Anderson would go on to file for bankruptcy, a trend that has hardly abated in the last decade. According to a 2009 Sports Illustrated story, 60% of NBA players are broke within five years of retirement.

Financial advisers compare the players, many of whom come from impoverished backgrounds without much financial literacy, to lottery winners, completely unprepared to handle vast sums of money. With an extremely demanding and high-profile job, they have neither time nor the inclination to educate themselves, and as a result, they let others manage their finances, often to disastrous results.

It’s hard for them to trust people they meet after they become famous, so they turn to the ones who were there before -- family, friends, girlfriends. But those relationships can be altered by such a sudden imbalance in wealth as well: the divorce rate for pro athletes is estimated to be between 60-80%.

So while the union has been warning players for years to save money in preparation for the lockout, there’s no way to know whether those warnings have fallen on deaf ears. Especially in this economy, where the financial pressures on players are undoubtedly higher than they were in the middle of the tech boom over a decade ago.

Even the players who do manage their finances well have to face the reality that the average NBA career is only 4.7 years long. For many, the money they lose from the 11-12 season is money they will never get back.

And with all the players who stayed in school to avoid the lockout, the 2012 draft class is shaping up to be one of the deepest in many years. Combine as many as 50 players from the 2012 draft with the 30 first-round picks in 2011, and there might be 80 union members who will never play in the NBA again if the entire season is lost.

With so little bargaining power, not even Billy Hunter can really know how united the players will be when those first game checks don’t come. Until then, the owners, confident history will repeat itself, will wait, meaning the lockout won’t be ending anytime soon.