The Epitome Of Positionless Basketball 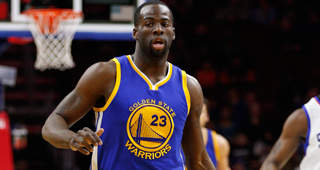 The Golden State Warriors were down 105-96 to the Los Angeles Clippers with 6:43 left in the fourth quarter. The Clippers had played pretty much flawless basketball to that point with two of the best players in the NBA - Blake Griffin and Chris Paul - operating at the very top of their games. They were up 16 points at the end of the first, 23 points in the second and they had beaten back a furious comeback to be up 10 in the middle of the fourth. That’s when the Warriors went to the line-up that won the NBA Finals for them - Draymond Green, Harrison Barnes, Andre Iguodala, Klay Thompson and Steph Curry.

Playing five-out basketball is the glass Golden State breaks in case of emergencies. The switch flipped as soon as it happened - they went on a 22-9 run and wound up beating the Clippers by seven. It was the same thing that happened in the Finals and it’s the same thing that has been happening the last two seasons. That group had a net rating +23.3 points in 108 minutes last year and +47.8 points in 43 minutes this year. If someone is going to stop the Warriors' rendezvous with history, they are going to have to figure out an answer to Draymond Green at the 5.

That unit is the epitome of positionless basketball. They surround the MVP with four wing players who go 6’7, 6’6, 6’8, 6’6. All five players can shoot 3’s, put the ball on the floor, finish at the rim and make plays for each other. When Curry and Green are running the pick-and-roll while surrounded by three shooters, the defense has to give up something. Once they have an advantage in numbers, the Warriors have too many good passers and too many smart players not to find the open man.

Most teams would benefit from playing small on offense. What makes Golden State’s small-ball line-ups so unique is how good they are on defense. Everyone but Steph can guard at least three positions and Draymond can guard all five. They can switch every pick-and-roll and they have the speed, length and collective defensive awareness to trap and recover from every part of the floor. Even without a traditional rim protector, they can swarm anyone who gets into the lane with a thicket of arms.

Things really get out of hand once they start going defense to offense because any of the five can start the break themselves. The ball starts flying around the court and it becomes almost impossible to pick up Curry and Thompson without leaving the paint open. The points start piling up and the game is over pretty quickly. A team with the No. 1 rated offense and the No. 4 rated defense that plays at the 4rth fastest pace in the league is going to kill teams in transition. This super-charged version isn’t even fair.

The key is Green’s versatility. The conventional wisdom would be to attack a 6’6 center in the paint. The problem is that Green has the length of a much bigger player (7’2 wingspan) and the quickness of a much smaller one. Draymond has everything you would want in an interior defender - length, quickness, strength, basketball IQ, toughness - except height. In last year’s playoffs, he more than held his own in 1-on-1 match-ups against Anthony Davis, Dwight Howard and Marc Gasol. His center of gravity is so low that it’s hard for bigger players to dislodge him while the referees are always going to give the smaller defender the benefit of the doubt when it comes to playing physical and brutalizing anyone he is guarding on the box.

Draymond at the 5 means Harrison Barnes at the 4 and his ability to slide down a position is just as important to making it work. Going small maximizes the strengths of his game - Barnes has always been better using his strength to guard bigger players than trying to keep up with smaller players on the perimeter and playing in extra space against slower defenders is more conducive to his offense than trying to punish smaller defenders on the box.

Put it all together and the Warriors have two wing players who can hold up against bigger players on one end of the floor and stretch them out on the other. Having that combination upfront nullifies most of the advantages of running the pick-and-roll on defense and it creates acres of space for the three other perimeter players on offense. Step 1 to playing like Golden State is finding shooters like Steph and Klay. Step 2 is finding frontcourt players with the versatility of Barnes and Green.

Beating speed with size has become increasingly difficult ever since the league made a few rule changes in the middle of the last decade - legalizing zone and quasi-zone defenses, eliminating hand-checking on the perimeter and loosening the rules on moving screens. Packing the paint makes it easier for smaller teams to defend bigger ones while making defenders guard with their feet instead of their hands makes it harder for slower teams to guard faster ones.

That’s why the debates about whether the Warriors could beat the great teams from previous eras are so pointless. They are playing a different sport and they are operating under a different series of rules - that’s what playing in a different era means. Think about how different things would be if the referees called illegal defense on Golden State every time they shaded the post and if the other team could grab Steph whenever he tried to dribble around them. The Warriors are taking the NBA’s new paradigm to its logical conclusion and they are being rewarded handsomely for it.

A bigger team has to play nearly perfect basketball to beat them. The only way to make it work with a conventional line-up that features two traditional big men would be if both could score with their back to the basket while having the the shooting ability to give each other space to operate and the passing ability to play high-low and counter any double teams the Warriors send. From there, you need three shooters on the perimeter who can space the floor and a PG who can control tempo, enter the ball in the post and prevent Golden State from speeding them up and getting the game going up-and-down. Even with all that, there’s no guarantee that many skilled offensive players are going to play enough defense to where it would matter.

Playing with only one big man would be easier logistically but it still require having an almost flawless player in that spot. You would need a guy who can score with his back to the basket, step out and shoot, pass and rebound at a high level while also being able to defend in space and protect the rim. A big man with any holes in his game would get destroyed by the Warriors and that’s essentially what they have been doing over the last two seasons. In essence, you need a big man who can score over the top of Draymond Green and defend Steph Curry in space.

The most radical idea of them all would be to try and beat Golden State at their own game. Instead of trying to beat a 5-out team with 3-out or 4-out basketball, go 5-out vs. 5-out and unleash complete anarchy. The Warriors want to win by being smaller, faster and more skilled than their opponents - it’s in their DNA. As a team on the vanguard of the small-ball revolution, the counter-revolution doesn’t scare them nearly as much as their fellow revolutionaries. If Draymond Green can play as the 5, why can’t Kawhi Leonard? Or Kevin Durant? Or LeBron James? It’s not like Draymond is going to punish those guys on the block or on the offensive boards.

The problem is that no team in the NBA has the same depth of wing players as Golden State. Do you really want to take LaMarcus Aldridge off the floor to play Kyle Anderson? Serge Ibaka to play Dion Waiters? Tristan Thompson to play Richard Jefferson? There are teams that can match the star power of Curry, Green and Klay but do any have three more two-way wing players like Barnes, Iguodala and Shaun Livingston?

There’s just no easy answers when you are playing Golden State. It’s almost as if they are a team from the future that’s traveled back in time to give us a preview of what the NBA is going to look like in 2020. The greatest teams in NBA history force other teams to adapt to them and they change the way the game is played in the process. The Warriors have a chance to be one of those teams. Either the league is going to figure out a counter to what they are doing or they are going to win a bunch of championships until everyone else can catch up.