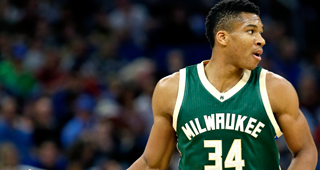 It’s the terrifying suddenness of Giannis Antetokounmpo’s game that gets me. On his drives, it’s like the jump-cuts in Breathless, the way he’s lowering his shoulder, and now he’s taking his Twizzlers statue of a body and whirling it around, and now he’s dunking with those telescopic arms at full stretch as his opponent drifts out of the frame with all his weight on the wrong foot. We get these athletes every so often in basketball—Kevin Garnett, Vince Carter, LeBron James—who reconstruct our understanding of the sport by realizing what was previously thought of as physically impossible. If a guy that big is moving that fast, he can’t change direction so—well, nevermind.

Narrativizing this is sort of what we do here. You and me and sports media folks and anybody with an opinion and a phone or a bar tab. Expressing yourself in jubilant onomatopoeia and emoji cascade only goes so far. You want to be a little more eloquent about this spectacular player. Lookitthat! Lookthe[bleep]. at. that. is the most honest and purely meaningful thing to be said about a six-foot-eleven forward who produces the most serene violence we’ve ever seen, but it’s not much to chew on.

We want to say more, so we project. The reason the internet is bursting like a late-autumn squirrel’s cheeks with TV episode recaps is because television—the stuff David Lynch isn’t scripting, anyway—traffics heavily in plot and plot is easy to muse on for many paragraphs. How does what’s already happened inform what’s going to happen next? That’s a writing prompt that’s simple to satisfy at length.

As our friend Fredorrarci has observed, sports are a TV show—an interminable serialized tale we tune into regularly—but I would argue that’s only because we choose to think of them that way. They could be movies, or even just parts of movies. There’s a scene in Seijun Suzuki’s Everything Goes Wrong that I remember often. There’s a girl confessing her rape to our hero—who’s a little like if James Dean in Rebel Without A Cause were a less romantic sociopath—as they travel down a street, and she’s shrieking and sobbing and trying to get him to feel her shame and anguish, and they happen upon a child with a few balloons clutched in his hand. Our hero doesn’t turn to the sobbing girl. He pops the balloons—bap! bap! bap!—with a cigarette. and then he grabs a leaf from a tree, clasps it over her mouth for a second, and walks away. It’s a strikingly absurd bit of filmmaking in a movie that’s mostly tediously grim. It stands on its own as a bit of genius, reminding you that you’re watching a master who would go on to direct Tokyo Drifter and Branded To Kill.

I can’t tell you much else about Everything Goes Wrong without rewatching the thing. (Except that there’s a lively, brassy soundtrack and a cool bar where all the roughneck Japanese teens hang out.) The movie, for me, is the balloon scene, and I’m good with that, because it’s impactful and it’s all I need to carry around with me. The story isn’t worth recounting. The characters are stock. A lot of movies are like this in my mind—a few isolated images, maybe a bit of sharp dialogue. Even some ones that I really like aren’t whole in my memory. I’m still not totally clear on what happens in Chinatown, not because I haven’t been riveted the couple of times I’ve watched it but because I’m too preoccupied with the movements of Jack Nicholson’s eyebrows to keep up with the finer points of the plot. Which doesn’t trouble me. Enjoying art is losing yourself in its details.

And there is a difference between enjoying something and doing criticism of it, though there is a dearth of criticism that communicates pleasure, because that’s a more difficult thing to do than describe what something is, or wonder about it, or deliver a take on it. That goes a way toward explaining why Roger Ebert was so revered. When he loved a movie, he could sometimes make you love it too, if only during the three minutes you spent reading his review.

Giannis Antetokounmpo is going to do great things. His game right now is merely a faint outline of the game he’s going to have when he’s twenty-nine. Depending on how the league evolves over the next few years, he might guard fives on defense while running the point on offense. He’s definitely going to compete for MVPs. As soon as this season, maybe. If he adds a reliable jumper to his game, he’ll be uncheckable. There’s a lot to be excited about with him and a lot to reckon, but there is already—as there was with LeBron when he was eighteen, and, more recently, with Anthony Davis at twenty-one, and, last year, with Karl-Anthony Towns and Andrew Wiggins as a duo—an overeagerness to view Giannis from thirty-thousand feet, to fixate on what he’ll become rather than what he is. We’re not uniquely impatient people these days, but the instantaneousness of some information has made us insufferable and self-thwarting in certain respects: we’re obsessed with knowing (or thinking we know) what’s next.

With Giannis, as with everything, too many of us are trying to get out in front of the plot, forgetting that the plot isn’t what’s most important anyway. When a significant player retires, we often try to make sense of their careers by cataloguing their failures and triumphs and placing them somewhere in our personal pantheons. Ahead of Larry Johnson, but behind Tracy McGrady. This isn’t such a bad exercise, but it glosses over nearly all the actual substance of the athlete’s career, which is to say we privilege the totality of whatever happened over specificity of what did. Not all moments slip through the cracks. We recall the missed buzzer beater against Charlotte in the first round and the triple-double in Game 6 of the Conference Finals. The grand gets discussed, but the granular is largely ignored. We do this in part because we’re not in it anymore. We’re remembering. We need temporal landmarks to find our way back to the player.

We do the inverse with young stars. We speculate and dream. To the point that it sometimes feels like we never talk about what’s happening right now. We are always looking forward or back.

In all likelihood, this isn’t going to be Giannis’s year. The Bucks can’t hang with the Cavs or Celtics, let alone the Warriors. LeBron and Kevin Durant are still the two best players on the planet by a pretty comfortable margin. And Giannis is still a little green to be claiming dominion over the rest of the league anyway. He’s got big mistakes to make, still. Maybe age twenty-four, twenty-five. That’ll be his year. But this year will be worth cherishing too. This will have moments in which we can not only live but be fully alive inside. We can share it with each other, if we’re up to that task. We can have fun. If a player gives you that, no matter what he has done or might do, he gives you everything. You just have to know how to appreciate it.