Willie Reed To Sign With Kings For Remainder Of Season 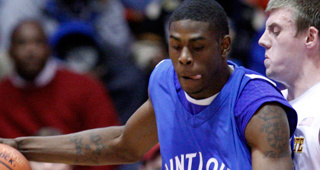 Willie Reed has reached agreement with the Sacramento Kings on a contract for the remainder of the season, his agent Joel Bell told RealGM.

The deal contains a team option for next season.

Reed, a 6-foot-10 forward with the Springfield Armor of the NBA D-League, has averaged 14.8 points, 10.1 rebounds, 1.6 blocks and 59 percent shooting this season. He went to training camp with the Kings in 2012, and the team remains enamored with his activity and athleticism.

Reed finished last season with the Memphis Grizzlies and participated with their summer league team, but he was released prior to 2013-14.

Reed, 23, played two seasons at Saint Louis University, where he averaged 12.4 points and 7.9 rebounds as a sophomore.