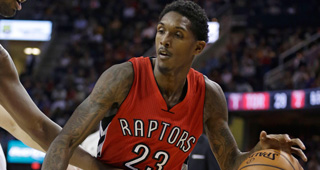 Lou Williams is expected to receive strong interest from teams that include the Sacramento Kings, Los Angeles Lakers, New York Knicks and Brooklyn Nets, providing a clear competition for the Toronto Raptors to retain the NBA’s reigning Sixth Man of the Year, league sources told RealGM.

The Raptors and Williams have expressed a mutual interest, and there will be a window early in free agency for Toronto to finalize an agreement that’s viable for the 6-foot-2 guard.

As one of the most potent scorers on the market, Williams could scan league-wide possibilities of a three-year deal in the range of $27 million or four years for $35 million.

For the season, Williams scored a career-best 15.5 points per game while averaging 25.2 minutes — a magnificent resurgence as a player after tearing his ACL in 2013.

Williams, 28, has played 10 NBA seasons with the Philadelphia 76ers, Atlanta Hawks and Raptors. He has career averages of 11.9 points, 2.9 assists and two rebounds.