Jason Terry Agrees To Re-Sign With Rockets On $1.5M Deal 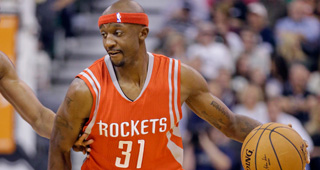 Jason Terry has agreed to re-sign with the Houston Rockets on a one-year, $1.5 million contract, league sources tell RealGM.

The New Orleans Pelicans and Utah Jazz also had strong dialogue to sign Terry with his agent, Byron Irvin. Ultimately, the opportunity to win and cohesive recruitment from Rockets players and coaches pushed Terry to return. Terry has played an immense role in the Rockets' locker room, becoming an integral role player in the 2015 postseason alongside James Harden in the backcourt.

Terry averaged 21.3 minutes per game in 77 appearances last season with the Rockets and started all 17 playoff games. The Rockets acquired Terry during the 2014 offseason from the Sacramento Kings.

Terry turns 38 in September and is entering his 17th NBA season.