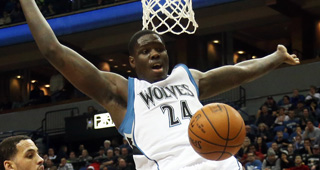 Anthony Bennett could be joining the Sydney Kings next season, according to a report out of Australia.

Bennett was the first overall pick in 2013 out of UNLV by the Cleveland Cavaliers.

Bennett was part of the Andrew Wiggins-Kevin Love trade with the Minnesota Timberwolves and lasted just one season there as well. Bennett was waived by the Toronto Raptors this season in February.