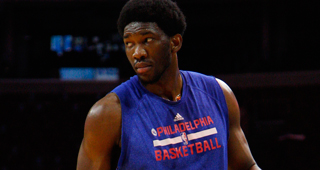 Joel Embiid participated in the Philadelphia 76ers' end-of-practice scrimmage on Wednesday. Embiid hasn't played in a game since March 1, 2014.

Embiid appeared to struggle with his footwork, finding his balance and figuring out things in real-time speed on defense.

"Everything is kind of off right now as far as catching the ball and shooting," said Embiid. "So I've still got to get in the flow of the game."

Embiid acknowledged he's out of sync because of his two-year absence.

"It's really frustrating," Embiid said, "But like I said, you've got the trust the process, which I've been doing. I have to keep working on my game and make sure I do the same thing over and over.

"I think I'm the type of guy that's going to learn fast. It's just going to come when it comes."