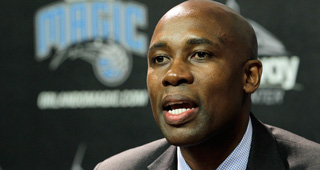 The Brooklyn Nets elevated Jacque Vaughn to head coach to replace Kenny Atkinson in March and he's under serious consideration to remain in the job permanently.

"He's the head coach," said Adrian Wojnarowski on his podcast. "They didn't make him interim coach. I think the Nets are considering the possibility of a search, I would still give Jacque Vaughn, I would take Jacque Vaughn against the field right now (to remain head coach of the Nets next season).

"To keep that job," added Wojnarowski.

Wojnarowski also said he's not sure the fact the Nets are bringing a depleted team to Orlando will necessarily hurt Vaughn's chances, but it won't give him an opportunity to prove he's the right coach for this team.