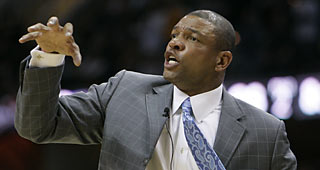 The decision for the Los Angeles Clippers and Doc Rivers to mutually part ways was "an accumulation of philosophical differences through the years and, especially, recent weeks" rather than "an impulsive overreaction to the organization's early playoff exit," reports Jovan Buha of The Athletic.

The two sides ultimately decided they had differing visions of how the Clippers should move forward.

Rivers viewed the roster as flawed, while Ballmer and the front office believed they were championship favorites.