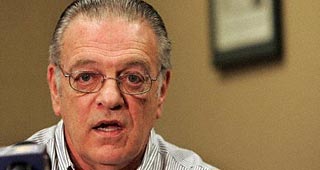 Donnie Walsh is retiring from his role with the Indiana Pacers.

In Walsh’s 22 years as general manager or president, the Pacers reached the playoffs 19 times.

“I’m getting older and don’t have the energy,” said Walsh, 79. “It’s a young man’s sport. This job has always occupied a great deal of my time. The Pacers were always in my head. This gives me an opportunity to pay attention to my children, my grandchildren and my wife (Judy) of 58 years.”

“Over my thirty-year relationship with Donnie, I have been amazed to watch him help lead this organization to what it has become," Pacers owner Herb Simon said in a statement. "He was certainly the right leader at the right time, and the invaluable wisdom and counsel he has provided over the decades extend well beyond the lines of the basketball court. For that, I owe him an incredible debt of gratitude. While he may be stepping away, Donnie will always be part of the Pacers family and I am personally excited for him as he transitions to his next chapter.”