Notes From The 2014 Nike Hoop Summit 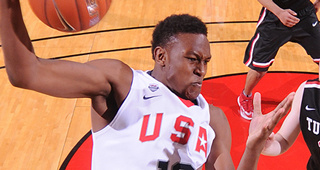 Five bigs could conceivably become the first five picks of the 2015 NBA Draft. All five of them (Jahlil Okafor, Myles Turner, Karl Towns Jr., Trey Lyles and Cliff Alexander) have been here this week in Portland at the Nike Hoop Summit and all five have radically divergent styles.

Turner: The raw athlete with the length to become a Defensive Player of the Year candidate.

While Alexander has the least amount of talent and upside by a comfortable margin, the other four are remarkably close in terms of talent and how someone ranks them is an indicator of what they value most and least from a big.

Jahlil Okafor continues to look like the most skilled post prospect we’ve seen in years, with a blend of advanced footwork and quickness in spin moves to lose his defender. Okafor almost plays like an ice hockey player in the smoothness of his movements, yet he rarely leaves the ground unless he’s right at the rim and that is more length than lift.

Okafor lacks verticality in the post and not having a reliable jump hook is a liability when he goes to work against a defender as long and athletic as Turner or Towns.

Okafor won’t impact the game too significantly unless he’s the focal point of a team’s halfcourt offense. The World Select Team played a pressing halfcourt zone, which didn’t allow Okafor to get to work until late in the second quarter when they switched to man.

For most of the game, Okafor looked far more ordinary than I’ve seen him on other occasions.

Myles Turner looks stronger and is also one inch taller since I last saw him in August. He is active on defense and a disruptor to anyone coming into the lane.

Turner is an injury concern due to how awkward he runs and lacks fluidity in his movements. Turner left the game in the second half with an injured ankle.

Turner already has a respectable jumper and hit one in the game just inside the three-point line, but it is doubtful he ever becomes a significant scorer.

Karl Towns had a better looking shot during the practice sessions than nearly anyone on the USA roster. He has the type of range on his jumper that most bigs don’t develop into very late in his career. Towns has the potential to be the best all-around big of this group because he projects as having the capacity to develop every critical aspect of his game.

Towns doesn’t have the athleticism of Turner or skill level of Okafor, but he can be a more active version of a healthy Andrew Bynum, who coincidentally went to the same high school in New Jersey. Similar to Bynum, the lack of seriousness in his approach to the game is concerning. Some players are capable of maximizing their potential regardless, but the fear that he plateaus in his development is legitimate.

Trey Lyles has the complete toolbox for a face-up big. He’s smooth and has a sophisticated game in the 10-20 feet range in the halfcourt. Lyles was more confident and aggressive here than he was at adidas Nations, but he still tends to disappear and has lapses of playing too soft.

Cliff Alexander is not especially skilled or athletic, but does all a lot of little things like boxing out, setting a big screen, etc., that add up to an effective big in aggregate.

Even though Alexander the best rebounder right now of the group, I’m far less bullish on him, but I also believe bigs with his type of skill-set are far less valuable.

Most of the perimeter prospects are not quite at the same level at this point, though Emmanuel Mudiay, Stanley Johnson and Sviatoslav Mykhailiuk have been the most intriguing over the course of the week.

Emmanuel Mudiay was the best perimeter shooter of the week, which is particularly scary since he’s one of the biggest and strongest point guards with truly elite talent to emerge in recent years.

Mudiay can lose his man with ease off the dribble with sudden bursts of quickness and power that has some Dwyane Wade to it, but he too often dribbles sloppily into a black hole in the halfcourt and that part of his game will need to mature significantly in order for him to become an NBA starter.

Mudiay will play for Larry Brown at SMU and he’s absolutely capable and talented enough to play his way up draft boards all the way to No. 1 if he shows improved decision-making.

Mudiay had 12 points in the first half and dictated play for the World Select team, before finishing with a game-high 20 points. Mudiay had the most consistently impactful performance in the game and has the intangibles to become a franchise player.

Stanley Johnson is fearless going to the basket with the physicality of a football player. He was the toughest and most active player on the USA roster and is impossible to guard when he’s hitting from three because of how good he is driving the lane.

Johnson had a frustrating game, however, going 1-for-6 from the field.

Sviatoslav Mykhailiuk was a late addition to the roster and it was the first time nearly everyone has seen the 16-year-old out of Ukraine. Mykhailiuk appeared out of his element physically at times, but the purity of his shot and natural instinct were always there.

He turned the ball over on his first touch of the game curling around a screen, but had a nice assist on his next touch.

Mykhailiuk struggled badly with his three-point shot attempts in the first half as the speed of the game.

Mykhailiuk is a legitimate 6’6 and he already is an impressive athlete for his age. Mykhailiuk can dunk with ease on an alley-oop to himself off the backboard and his quickness in creating for himself off the dribble may become his most special ability.

Justise Winslow & Kelly Oubre: These two southpaw wings are extraordinarily similar on the superficial levels. They’re about the same height and have similar skill-sets, though Winslow is a little stronger. Both are physically more mature than most of the other players. Oubre has a better perimeter shot but appears prone to mental lapses and erratic misses, while Winslow is extremely serious and will clearly maximize his potential with his work ethic.

Winslow has enough skill and athleticism to convert on most of the opportunities his high motor creates.

With the possible exception of Tyus Jones, both players had the best games of any of the USA players with Winslow scoring 16 and Oubre finishing with 14.

Damien Inglis: One of the better perimeter shooters during the practice sessions, Inglis is an extremely long 6’8 due to his 7’3 wingspan. Inglis should become a useful 3 & D rotation player and has enough length and a wide frame to add strength to play small ball 4.

Inglis had good vision on a first quarter drive, finding Towns for an easy dunk. His playing time and usage was limited with Mudiay dominating the ball in the first half, but had a nice run in the second half.

Tyus Jones: A pure point guard with all of the leadership qualities you want from the position, Jones will undoubtedly have an outstanding college career at Duke. In terms of his NBA potential, it is difficult to gauge how special his skills are because he’ll need to be in order to become a start at that level due to his modest physical profile.

Jones is all runners and drive & kicks without a reliable jumper or sufficient athleticism to get to the rim.

Jones had a particularly strong second half with several key assists and steals to help USA pull away on their way to the 84-73 win.

Theo Pinson: Consistently a disruptor on the perimeter on both sides of the floor with his motor and length. The erratic nature of his game is alternately a benefit and detriment.

Jamal Murray: He picked his spots well with a strong shooting performance, hitting a pair of top of the arc three-pointers in the first half. There’s a lot of Leandro Barbosa in his game.

Clint Capela: The only player from this game that will be in the 2014 NBA Draft, Capela had two moments of impressive play for every seven frustrating ones throughout the week. Big project but he could certainly develop into a rotation big.