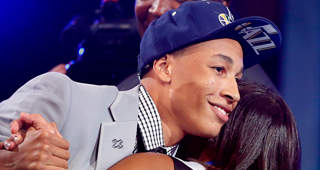 “Nothing against Dante Exum, but emotional resiliency, stability and an immediate, assured presence were all key considerations in support of selecting Jabari Parker,” Hill said.

In an interesting article in the New York Times last week, the Milwaukee Bucks gave a peek behind the curtain on how NBA teams evaluate prospects in the run up to the draft. According to the article, the Bucks brought in Dan Hill, a self-described facial coding expert, to evaluate the personalities of the top players on the board. After watching 10 hours of game film with the Bucks psychologist, Hill was part of the team that picked Jabari Parker at No. 2 overall.

From the outside, there’s no real way to know who had the final call in the Milwaukee war room or what line of thinking helped push Parker over the top of guys like Joel Embiid and Dante Exum. As the old saying goes, success has many fathers but defeat is an orphan. It will take years to know whether or not Parker was the right selection, especially after he wound up tearing his ACL in the first month of his rookie season, delaying his timetable indefinitely.

Despite the turnover at the ownership level, the Bucks have been one of the best drafting teams in the last few years, finding Larry Sanders, John Henson and Giannis Antetokounmpo in the middle of the first round. Going forward, Parker should be an integral part of their young core, a 6’9 250 combo forward who can score from anywhere on the floor. Before his season-ending injury, he was averaging 12 points, 5.5 rebounds and 2 assists a game on 49% shooting.

Parker’s early success has Hill taking a victory lap, as he had made appearances in the New York Times and on cable TV in the last few days, plugging his system and the potentially revolutionary insights it could provide about the psyches of prospects, one of the most difficult things to evaluate from the outside. In the age of Moneyball, we are told, the only way for NBA teams to stay ahead is to push the envelope, chasing the elusive “market inefficiency”.

However, if you take a look at the draft from a scouting perspective, the biggest market inefficiency was Exum falling to No. 5. In last year’s draft, the only guy with more upside than Exum was Embiid, who slipped to No. 3 because of medical concerns. There were no such issues with Exum, who has one of the best combinations of size, skill and athleticism to come into the league in recent years. You don’t need any new age theories or revolutionary insights to see why he is such an intriguing prospect - just a tape measure, some game film and a little bit of common sense.

At 6’6 190 with a 6’9 wingspan, Exum is a huge guard who can slide between either backcourt position. As a result of his versatility, he is already one of the biggest PG’s and fastest SG’s in the league, even at the age of 19. Most importantly, he is a fundamentally sound player with a complete game who can create his own shot, run point, stretch the floor, match up with multiple positions on defense and compete on the boards. Unlike Monta Ellis, Dante Exum really does have it all.

Exum’s rookie numbers won’t jump off the page at you, but that’s because the Utah Jazz are bringing him along slowly, playing him only 18 minutes a game. As you would expect for a teenager who was playing on the high school level in Australia last season, Exum has had a huge adjustment process both on and off the court, as he deals with the increased level of competition, the rigors of the NBA schedule and life in the United States. For a guys like Exum, the rookie season is mostly about survival.

On the court, the biggest knock on him was his three-point shot. He has assuaged those doubts in the first two months of the season, shooting 35% from 3 on 2.4 attempts a game. With that shot in his arsenal, Exum can be practically indefensible, as few guards have the size and speed to stay in front of him while respecting his jumper. It will take some time to put it all together, but the sky is the limit for Exum, who holds the key to Utah’s rebuilding efforts.

Maybe the most encouraging part of Exum’s game is his ability to take care of the ball at such a young age, as he is averaging 2 assists on 1.2 turnovers a game. With Gordon Hayward and Alec Burks in place on the wings, Exum doesn’t have to be a “true PG”, so long as he has a positive assist-to-turnover ratio and he gets them into their offense. And with Exum at point, the Jazz would have an almost overwhelming edge in size, length and athleticism on the perimeter - 6’6, 6’6 and 6’8.

Utah hasn’t been as successful as Milwaukee this season, but they are a much younger team in a much tougher conference, so that isn’t a huge surprise. Over the last few years, the Jazz have been one of the most patient organizations in the NBA, carefully managing their assets and trying to build an elite team from the ground up, almost entirely through the draft. In that respect, they have a lot of similarities with the Bucks, who will also never be much of a free agent destination, particularly for American players.

Both franchise have good young cores in place, but their ceiling will depend in large part on what happened in the 2014 draft, when Milwaukee took Parker over Exum. And while Parker had a better chance to be an immediate contributor, he never had Exum’s upside. Parker doesn’t have nearly the same type of positional versatility, as his size and frame means he is almost certain to wind up as a small-ball PF, even though the Bucks tried to start him at SF to start the season. Defense is always going to be an issue for a 250 pound forward with a 6’11 wingspan without elite athleticism - Jabari doesn’t have the length or quickness to stay in front of the best players in the NBA at his position.

That, in a nutshell, is what scouting is - trying to project what players will look like 5-7 years down the road. Due to the way restricted free agency is set up, NBA teams have almost exclusive rights to the guys they draft through their first two pro contracts. As a rule, guys like Parker and Exum don’t hit unrestricted free agency until they are almost a decade into the league. In making a decision on draft night, the most important things the Bucks had to figure out were A) who will be the better player in 2020 and B) who will be the best fit with the core they already have.

From that perspective, the case for Exum only grows stronger. He would have been the perfect fit next to an undersized scoring guard like Brandon Knight, as the two could cross-switch on defense while Exum’s ability to run the offense would have allowed Knight to concentrate on getting buckets. With Giannis at the SF, Milwaukee would have had one of the longest and most athletic perimeter trios in the league. Exum and Giannis could have been their version of Zach LaVine and Andrew Wiggins, or maybe even Kevin Durant and Russell Westbrook.

Instead, the Bucks allowed a guy with a PhD to make all kinds of broad claims about his psychological research and come to a conclusion based on a theory that is hardly scientifically rigorous. Tucked into that New York Times article is the only thing you really need to know about the type of model that Hill was using to make a decision that would shape the franchise for the next decade:

“To me the big question is, how well does the method actually work?” another neuroscientist said in an email interview. “It’s not easy to get good evidence, because a player’s performance and teamwork are complex outcomes, and the teams are not run like clinical trials, with coaches and managers blind to the facial coding findings and so forth. So it’s hard to know whether this system works well, gives some marginal benefit or does nothing at all.”

In other words, there’s no real way to run a controlled experiment on Hill’s metric. And while it certainly seems like an interesting hypotheses, the history of psychology is riddled with the corpses of interesting hypotheses, from Sigmund Freud to phrenology. Two hundred years ago, guys like Hill were going around saying that all you needed to know about someone’s personality was the shape of their skull.

To me, the most troubling part of his theory is the underlying implication - that an employee’s productivity is ultimately shaped by their personality and not their ability and that seemingly intangible qualities like “emotional resiliency” and “presence” could be accurately measured and quantified in a short period of time.

Who knows? Maybe Hill is right. Maybe he can watch someone from a distance, peer into their soul and see their future merely by a careful examination of their facial muscles. Maybe he has cracked the code in a way the phrenologists never could.

Or maybe not. Maybe there’s no arcane knowledge out there, no previously unknown truth to discover. Maybe the game of basketball really isn’t that complicated and maybe the game tape tells us all we need to know about a young basketball player.

Dan Hill claims he can learn more about Jabari Parker and Dante Exum’s future from their faces than from their arms, their feet and the way they play the game. We’ll know soon enough if he’s right.