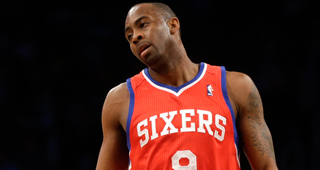 For the fourth consecutive season, Zalgirs Kaunas became a great place for American players to kick-start their career in Europe and significantly raise their value in just a year. Sonny Weems, Tremmell Darden, Justin Dentmon and now James Anderson, all found their place in Lithuania, where they got their name out and entered the radar of leading Euroleague teams such CSKA Moscow and Real Madrid.

Anderson is the latest example as he is currently one of the best Euroleague rookies this season, averaging 15.8 points, 5.5 rebounds and 2.2 assists in 28 minutes per game. The 25-year-old former Oklahoma State star was the starting guard for the Philadephia 76ers last season, averaging 10.1 points and 3.8 rebounds, and then surprisingly made a move to Kaunas, the second-largest city in Lithuania, with an population of over 300,000.

RealGM sat down with Anderson in Kaunas to talk about the adjustments in Lithuania, the first half of the Euroleague season, his game-winning shot, tanking with 76ers and his future plans.

RealGM: First of all, how would you evaluate the first half of the season?

Anderson: I thought it was good. For me, I caught on pretty quickly, with the living here and different rules. It was a quick adjustment that I had to make and I think I did a pretty good job with grasping everything to get out to a good start.

RealGM: Could you name a thing or two that's been the biggest adjustment for you?

Anderson: On the court, there is a lot of stuff. They have different calls, for example, for travelling. You cannot call a timeout while the play is going on. It is different stuff that you have to remember, different from the NBA. They call more travels and that is the stuff that you need to get use to. I remember in the first week, Sarunas (Jasikevicius, assistant coach) called travel on me like 20 times. You cannot take the ball, run and then put it down like in the NBA. Here you have to put the ball down first.

RealGM: What about the adjustment off the court? Is the lifestyle in Lithuania different from what you are accustomed to?

Anderson: It was not bad. Food is good and that is not a big difference for me. The only tough thing for me is being away from my family. My family has not come over yet. That probably was the toughest thing off the court. Besides that, the living has been good, it is like a regular place to live. The food has been good too and I found different places where I can even find some food that I had in the States.

RealGM: For the biggest part of the Euroleague season, you have been playing alongside two young point guards, Lukas Lekavicius and Vaidas Kariniauskas. How did it feel playing with them?

Anderson: I thought it was good. They had a big responsibility. It was their first season at the top level, it was my first season here as well and we used LKL (Lithuanian basketball league) games and preseasons games to really get to know each other and know each other’s game. Just seeing them from preseason start to now, I think they really grew a lot. Of course, they had their growing pains it is all part of it.

RealGM: During the Euroleague regular season, did you ever catch yourself thinking ‘I wish we had more experienced point guard on the team'?

Anderson: We have who we have. Maalik (Wayns) was here, he got injured, and he left. We never really focused on who is coming. Even though if there is somebody coming, we are really just depending on who we have in the locker room and who we have on the floor at that time. I never doubted them, I stuck behind them and I tried to carry the most I could when I see they need help with. We did what we did, we still accomplished what we wanted to accomplish in the first part of the season. I think they did a good job.

RealGM: Your three-point play (with five seconds remaining, Anderson drove through a foul to tie the score and then converted the free throw to send his team into the Top 16) was one of most stunning moments of the Euroleague regular season. Could you walk me through that last possession?

Anderson: I wanted to get to a spot. I already had in my mind, I felt like he was going to bite for a pump fake. I didn’t know it will draw a contact, I thought I am just going to let him fly by. I wanted to make a play and my team put the ball in my hands. Earlier in this season, I was in the same situation but I came up short. I had a pull-up, good look and I missed the shot. This time I wanted to make sure I made the play, a very important play that put us in the Top 16.

RealGM: What are your impressions about Zalgiris’ new point guard Will Cherry?

Anderson: I think he will definitely help us. He is still getting comfortable with everything. Once he really gets going as he is lately getting into his rhythm, once he starts getting into rotation, I think he is really going to help us. We have some tough games coming up, we will need everybody and he will take a bit part in it.

RealGM: Taking you back to the NBA, how did it feel to be a part of the tanking situation with the 76ers? On one hand, you get plenty of playing time and a chance to show yourself, but on the other, the team is not competitive and you have to lose on a daily basis.

Anderson: With the players and the coaches, we had the same mindset all year. Who likes to lose? We were not going out and trying to lose on purpose. We had a lot of close games actually that we should have won. It was the same mindset; our coach [Brett] Brown did a great job of keeping everybody together and keep the locker room close. Everybody continued to improve. We just could not get over the hump for a while. It was tough but it was not a mindset of trying to lose.

RealGM: Did you think about the upcoming season at that time?

Anderson: Definitely, somebody is looking at you all the time. For me personally, I wanted to continue to improve and continue doing what I was doing. It was nothing different when we started the season and nothing changed when we started losing. I kept the same mindset and tried to improve everyday.

RealGM: After that, how did you end up signing with Zalgiris last offseason?

Anderson: Just looked at the pros and cons, different situations and I thought it was the best decision to come over here. I wanted to get adjusted to European life, get my name out there in Europe and play for a good organization. Once they presented me an opportunity, I felt comfortable, weighed pros and cons and went here.

RealGM: Do you see yourself playing in Europe in upcoming years?

Anderson: Depends on different situations that I have in front of me after the season. I see what situation is best for me and my family and I go that way. I would not mind playing for Euroleague title as basketball here in Europe is as good as it is in the States. The competition here is way better and more skillful that I thought it was before I got here. Once I got here, I was really surprised of the skill level.