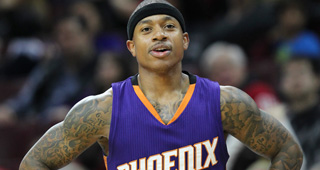 The Boston Celtics got in on the action during what was easily the most entertaining trade deadline in NBA history on Thursday, acquiring Isaiah Thomas from the Phoenix Suns for Marcus Thornton and a first round draft pick.

The deal is significant as it makes good basketball sense and signals that Danny Ainge is finally ready to begin flipping some of his assets. Whether or not the Celtics sneak into the bottom of the playoff picture in the Eastern Conference is irrelevant when you look at the big picture. It’s more important that sections of the roster are beginning to take shape.

Thornton carried little meaningful value for the Celtics. He was playing under a tradeable contract, due $8.7 million in total on an expiring deal. While the Celtics needed scoring, specifically from the backcourt, but it never made sense when Brad Stevens gave time to Thornton over rookie James Young. Thornton played 16.4 minutes over 39 games, time that can now be allocated elsewhere as the trade shuffles the guard/wing rotation.

Ainge acquired Thornton, along with Tyler Zeller and a 2016 first-round draft pick, in a three-team deal with the Brooklyn Nets and Cleveland Cavaliers last July. The Celtics were able to add those three assets for just a second round pick, which went to Cleveland, because they used a trade exception created when they sent Kevin Garnett and Paul Pierce to the Nets in 2013.

If you follow the line of assets, the acquisition of Thomas is part of the windfall from the infamous trade that sent KG and Pierce to Brooklyn. The pick sent to Phoenix in this deal is the first rounder acquired along with Zeller and Thornton. It’s top-10 protected in 2016, which means the apocalypse would have to happen for the Cavaliers to keep the pick.

Ainge was able to part with a first round pick next year because he has been hoarding picks since Pierce and Garnett were traded. Even with the Cleveland pick in Phoenix’s possession, Boston still has five, maybe six, first round picks in the next two drafts.

The first call Thomas received when he became a restricted free agent last July was from Ainge, who wanted to sign him away from the Sacramento Kings more than seven months ago. When it became clear within the last few weeks that the Suns would be selling at the deadline, Ainge prepared to pounce.

One of the hot rumors in New York during All-Star Weekend was that Phoenix badly wanted to deal Goran Dragic, who will be a free agent this coming summer, but that Thomas could be had as well. The belief was that the Suns might be able pacify Dragic, who was unhappy with the team’s three-point guard system, by dealing Thomas. That seemed plausible until Dragic and his representatives asked the club to trade him and went public with his displeasure, telling reporters “I don’t trust them anymore” after Wednesday’s practice.

Enter Ainge, who had already entered folk hero status in Boston, to take advantage of a bad situation in Phoenix. The Celtics were also linked to Dragic, but are happy to end up with at least one guard from the Suns.

The Point Guardians of the Galaxy didn’t last a full season, but credit Ryan McDonough for how he dealt both Thomas and Dragic (traded to the Miami Heat) as he resets the team’s vision and rebuilds once again.

It was more important for the Suns to get something for Dragic before he left without any compensation, but they no longer owe Thomas $20 million over the next three seasons and get to try out Brandon Knight (acquired in a three-team deal with the Milwaukee Bucks and Philadelphia 76ers) for the next two months.

The pick Phoenix acquired in this deal replaces the one they sent to Philadelphia in the Knight deal, although it’s unlikely to be as high as the one sent out on the same afternoon.

Every team is in a unique situation and the Celtics are very happy to assume the same contract the Suns just shed. Thomas landed with the Suns following a sign-and-trade with the Kings after a four-year, $28 million deal was reached. All indications are that Ainge would have added the 5’9” guard on that deal this past offseason had he gotten the chance. It’s front-loaded, decreasing in value as it progresses.

Grade for Boston: A

Thomas won’t be mistaken for an All-Star, but his arrival signifies the beginning of roster cohesion in Boston.

Stevens now has a promising three-guard rotation of Marcus Smart, Avery Bradley and Thomas. Smart has played well as of late and is growing as a rookie, Bradley is one of the best on-ball defenders in basketball and Thomas is both tenacious and a proven scorer.

Smart and Thomas can share ball-handling duties, moving Evan Turner to his rightful position on the wing. There will also be more minutes for James Young with Thornton gone. Young, the 17th pick last June and turning 20 in April, has played just 164 minutes this season.

Stevens wants Thomas shooting threes and drawing fouls on penetration because he’s been a poor mid-range shooter this season. He’s hitting just 37.7% of attempts from 10-16 feet, considerably lower than his career mark of 41.9%. Thomas knows his strengths, with mid-range jumpers representing just 10.3% of his shot attempts through 262 games as a professional.

In order for Ainge to complete a sustainable rebuild of the Celtics, he has to use all of the picks he has accumulated in a perfect mix of trades and selections. Using what is expected to be a late 2016 first-round pick (and a spare roster part) to add Thomas on an affordable long-term deal is a near-perfect start.