Notes From The 2015 Nike Hoop Summit 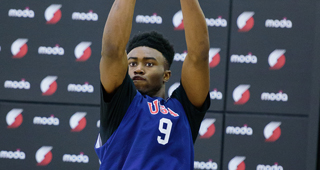 The depth of future lottery talent in the 2015 Nike Hoop Summit wasn’t as strong as past seasons, including last year’s edition that comprises a good percentage of the draft crop, but there are three potential franchise-changing talents in Skal Labissiere, Ben Simmons and Jaylen Brown.

Skal Labissiere: A 6-11 native of Haiti who has committed to Kentucky, Labissiere is a super agile and long big that projects as being capable of doing everything on the floor. Labissiere isn’t quite as good of a shooter as Karl-Anthony Towns was last year here, but he has really good mechanics with rise and a high release point on his jumper. Labissiere also has the physical gifts to be an outstanding rim protector, but can’t impose his length in a consistently effective way at this point.

Labissiere looks much better in workouts than he does in game action where he can finish well with both hands. Labissiere hasn’t quite put together all of the individual components of his game to maximize his talent in aggregate, but he had a particularly strong fourth quarter and finished with 21 points and six rebounds.

Ben Simmons: Without question, an NBA offense can be built around Simmons as a 6-9 playmaker with a preternatural feel for the game. Simmons has a great open floor handle and keeps scanning the play ahead of him looking for an open man or a lane to drive to the basket.

Simmons is more “basketball athletic” than “jump out of the gym” athletic, but he has no problem getting to the rim if he gets some air space.

The downside with Simmons is he’s an all or nothing type player right now. It’s hard to envision him being very effective unless he dominates the ball and he’s prone to trying to do too much with turnovers and low efficiency shots piling up as quickly as his surges making buckets or assisting on them. Simmons was guilty of this in the first half before settling in during the second half.

There’s an awfully wide margin between being the talent needed to be that guy on a playoff team and on a bad team (or as a second unit scorer).

As a tall lefty with his brand of all-around game, the most logical comparison is to Michael Beasley. Beasley was more talented at this age than Simmons, but talent was of course never the issue for Beasley.

Jaylen Brown: Brown has all of the qualities of an elite wing scorer with his explosive athleticism, jumper and swagger. Brown has remarkable balance and a handle that lets him get anywhere on the floor he wants. Brown’s jumper is very good considering everything else he does so well, but he’s more of a scorer’s shooter than a pure shooter.

Brown attacked the rim against the World Team in the halfcourt with fearlessness. Brown also played some power forward when USA went small, but he had an inefficient scoring performance and they went with Luke Kennard and Allonzo Trier instead of him down the stretch.

Staying engaged mentally could be an issue with Brown as he had a few lapses of concentration. Brown’s shot selection can get erratic and he also tends to overcommit on defense.

Thon Maker: On simple, instinctual plays to the basket, Maker looks unstoppable with his combination of length and athleticism. Maker lacks court awareness and is a beat slow with his decision-making, which causes him to struggle when he needs to have a countermove. Maker can put the ball on the deck really well, but he’s more of a one-on-none workout superstar at this point.

For a super long seven-footer, Maker has an extremely high motor and plays with the type of hustle associated with lesser talents.

Malik Newman: Newman is an outstanding perimeter shooter with good rise and consistent mechanics. Newman has good body control with his handle, but his penetration is typically setup by defenders honoring his jumper than being able to break down his man. Newman lacks the needed size to be a typical NBA shooting guard and isn’t a very gifted passer at this point in his development.

Newman had a good sequence in the second quarter where he hit a three-pointer from NBA range and then hit a runner in transition.

Jamal Murray: Murray is a known commodity on this circuit as he was at the Nike Hoop Summit last season as a sophomore and is easy to overlook. More athletic than he appears to be at first glance, Murray consistently makes a positive impact whenever he’s on the floor. Murray is a cerebral player with a good handle and good release on his jumper. Murray is also a clever and elusive finisher at the basket.

He’ll probably be stuck between positions long-term, but there are always minutes for someone who will put his stamp on the game in as many different ways as Murray.

Murray had 30 points and five assists in the game.

Cheick Diallo: Diallo is a project with power forward size, making him an entirely different type of project than the seven-footers Labissiere and Maker.

Diallo had a great spin move in transition for a one-handed dunk in the opening minutes of the game.

Luke Kennard: If you’re creating a Duke player in a lab for college basketball fans to hate like only a Blue Devil can be hated, he would look and play like Luke Kennard. With Brown sitting in Thursday’s scrimmage, Kennard was the best player on the floor for the United States. Kennard is a quality shooter with a strong floor game to complement. Kennard is a smooth and shifty lefty and moves well without the ball.

The issue for Kennard long-term will be whether he’s capable of defending wings with NBA quality athleticism.

Isaiah Briscoe: The most engaged and effective defender of the week was easily Isaiah Briscoe, who will attend Kentucky. Briscoe is a throwback point guard built like an NFL safety at 6-2. Briscoe is a really strong leader that will be the facilitator/floor general in college and a competent backup point guard when he reaches the NBA.

Ivan Rabb: Rabb didn’t have a particularly strong week, but was USA’s big who had the best chance of matching up against the World Team. Rabb had a lot of awkward moments where it was difficult to see the tools that has made him a promising power forward prospect over the past few years, such as his face-up game and high rise on his jumper. Rabb seems to get down on himself during his difficult moments and how he adjusts when he’s not always the best player on the floor will be critical to monitor next season.

Allonzo Trier: An athletic wing with a good jumper, Trier should have a high impact career at Arizona, but he’s a full year older than most of the players in this game and that is of course critical to consider at this age.

Stephen Zimmerman: Zimmerman has improved dramatically from the first time I had a chance to see him in 2013 at adidas Nations.

Zimmerman had a sequence in the opening minutes of the second half where he hit a runner off the bounce in the halfcourt, led the break with an assist and then hit a 15-foot baseline jumper. Zimmerman largely will be what he is at this point, but that’s an agile 7-footer with a good feel for the game.

Brandon Ingram: The length and skill-set of Ingram as a 6’9 small forward is intriguing, but we’ll of course need to see how he fills out physically. Ingram had a nice shot fake into a perimeter jumper off the dribble in the game as part of an efficient performance. He’s capable of taking a huge jump in two or three years when he becomes a more finished product.