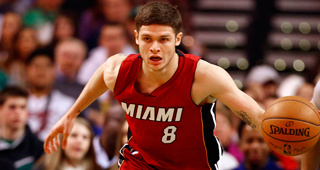 Tyler Johnson entered a series of representation pitches and NBA advisory evaluation meetings a year ago, a persistent message infused into the two-star high school recruit out of a mid-conference major. Everyone had presented to Johnson a career beyond the United States, jobs sending him to play professional basketball abroad, to shatter NBA aspirations for overseas money.

“A lot of people were setting me up overseas already, to go to different places,” Johnson says. “But that wasn’t what I was trying to do.”

He had been down winding paths in basketball, but those representation and personnel sit-downs left him unsure. Johnson wanted to pursue the NBA, thoroughly and respectably. He wanted more than simply one or two pre-draft workouts and interviews. He met one year ago with an agent, Pedro Power, whose study of Johnson’s past matched a shared vision for the future.

Fresno State’s coaching staff forever rave about Johnson’s relentless regimen and stable background, but he was stubborn too. With Johnson and Power, a partnership formed, and a gateway to the NBA crystalized.

“The first thing [Power] said was he was going to do everything he can to give me a legit shot and a real opportunity at the league,” Johnson told RealGM. “That was the very first meeting. We had the NBA discussion from the get go. I didn’t want someone who would push overseas and maybe get me a workout, and say, ‘Hey, see, I got you a shot.’

“I was overlooked by people who were in my backyard. It was nothing new. Some colleges that were right up the street from me didn’t even bother recruiting me. I felt overlooked, but I never looked at that as the end result, that I wasn’t a good player.

In so many ways, Johnson’s early dreams lied only blocks away in the Bay Area. His family and friends had always imagined the leaping, left-hander one day wearing a jersey for San Jose State or Santa Clara — developed from within and home scouted. Only, the scholarship offer never came from either university, and Fresno State had lottery talent in Paul George leaving for the NBA draft and a tremendous interest in Johnson and eventually a successful recruitment.

The blueprint for Fresno State’s nurturing of George as a perimeter player was clear to Johnson. Even now, Johnson remembers wishing his city’s nearby universities would have made a late call into his mother, his home phone, but a new motivation born inside him.

Johnson is making them all pay now, turning his shuttle between Orlando and Las Vegas for the Miami Heat’s summer league entry last July into a free-agent contract. He became a premium undrafted player, and NBA executives envisioned an aggressive, athletic and two-way guard in the Development League with Sioux Falls. Shortly before the D-League Showcase in January, Miami signed Johnson to the first of two 10-day contracts, resembling a strategic move to ensure it maintained his rights through the event and no backdoor deal transpires.

Two weeks into the league, and Johnson had played a savior role for a road win over the Boston Celtics, a complete performance of 13 points, nine rebounds and four assists. He had games of 26 and 24 points in a six-day stretch in early March, and every facet of his game — shooting, slashing and defending — came together.

“I’ve learned that you can mess yourself up thinking about all the different scenarios a team could be doing,” Johnsons says. “The point of going to the D-League Showcase was to get a 10-day contract, so when someone gives it to you before, there’s no reason to say, ‘Oh, no, I’m going to the showcase instead.’ You take it, and make the best of it.”

Gradually, Erik Spoelstra will come to fully trust Johnson, and the coach already uses his rookie late in games, late in this playoff race. The Heat appear poised to soon fall out of the postseason battle for the eighth seed, and still Dwyane Wade understands these call-ups by Pat Riley have given the team a pulse through injury and setback.

“I came right in the middle of a playoff hunt, so guys have tried to fast track me as quick as possible,” Johnson says. “For me, it’s all about doing whatever it takes. Defending, bringing energy.”

There have been more productive D-League call ups this season, but no one less heralded than Johnson tasked with the minutes and responsibility in a push for positioning in the Eastern Conference. So when he signed a two-year deal with the Heat, Johnson was in Miami and scrolled through a congratulatory Twitter post directed toward him from a model alum: George.

“I look up to Paul,” Johnson says. “He left the year that I came into college, and I look up to the guy because he came from the same school. He showed that it’s possible to come out of Fresno State, the mid-major schools, and be a superstar. Not just a player, but a superstar.”

George made them all pay years ago, and Johnson has built a foundation to follow. He’s just 22 and still must evolve as a shooter and playmaker.  “If you’re not trying to get better, you’re only getting worse, because everyone around you is getting better,” Johnson says. Sometimes, these pre-draft players have guarantees that are unsubstantiated in reality, but Johnson had remained silent in those representation meetings, those NBA evaluation readings. I’m better than this, he believed, and so Tyler Johnson went to work.