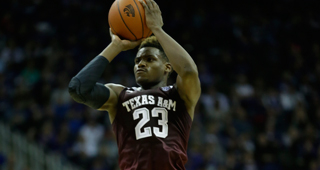 Coming into their senior seasons, Dorian Finney-Smith - projected as the No. 51 pick in 2016 by DraftExpress - and Danuel House - projected at No. 52 - are on the very fringes of the draft discussion. Seniors in that range have their work cut out for them just to stay where they are, much less move up the board. The longer you stay in school, the more time for scouts to pick apart your game and the less upside you represent for the team that drafts you. Pretty much everything has to go right for an older prospect or they risk becoming just another face in the crowd.

The numbers are against them. Even if House and Finney-Smith can stay in that range, late 2nd round picks aren’t great bets to make an NBA roster. A lot of them are drafted into situations where it’s just about impossible because their teams already have more than 15 guaranteed contracts in place. By that point in the draft, many teams would rather roll the dice and gamble on a long-shot international player they can stash overseas for a few seasons.

What House and Finney-Smith have in common are physical tools and a skill-set that could allow them to carve out a long career in the NBA. Perhaps more important, they are both transfers to SEC schools whose careers were disrupted by circumstances outside of their control, causing them to slip below the national radar. In a league where 3-and-D wing players are more valuable than ever, this part of the process is where NBA teams can start looking for the next Khris Middleton or DeMarre Carroll or Justin Holiday.

A former Top 30 recruit out of the Houston area, House’s decision to stay close to home at the University of Houston was a huge feather in the cap for coach James Dickey, who beat out most of the Big 12 to secure one of the biggest commitments to a program which had spent decades in the wilderness following Phi Slamma Jamma. Along with TaShawn Thomas, another local four-star recruit, House was supposed to put UH back on the map. Instead, the lack of a talent base around them kept the Cougars in the middle of Conference USA and then the American Athletic Conference and cost Dickey his job. Thomas decamped to OU while House moved a few miles up the road to Texas A&M.

Despite moving up a level of competition, House walked into a similar situation in terms of the team around him at A&M. The Aggies had not made the NCAA Tournament in their first three seasons under Billy Kennedy, who had not been able to maintain the level of success the school had under Billy Gillespie and Mark Turgeon. With House as their leading scorer, A&M was on the bubble all season long but a late-season injury to their star transfer caused them to come up just short and they wound up losing in the second round of the NIT.

The most encouraging sign for House was his dramatically improved three-point shooting, as he went from 33.3% on 4.4 attempts a game in his final season at UH to 40.0% on 6 attempts a game at A&M. The other tools are already there.  At 6’7 195 with a 6’8 wingspan, House is a supersized wing player with NBA-level athleticism who can play above the rim. He can take defenders off the dribble and draw fouls (career average of 4.7 free throw attempts a game) and his long frame means he can almost always get a clean look at the basket.

A deeper look into his offensive numbers show the shooting ability but also that he may have been over-extended a bit as a primary option on an A&M team that made its bones on defense:

Like most NCAA scorers, House has a lot of work when it comes to the defense. However, he has the athletic tools to at least be able to make the transition and he has improved on that side of the ball at A&M.

A&M is a program on the rise thanks to a Top 10 recruiting class in 2015 which features four consensus Top 100 players. How they do this season, though, will depend in large part on House, who has the chance to put together an SEC Player of the Year type campaign. That, at a minimum, will be what scouts are expecting of a big-time scorer like House in his senior season.

Finney-Smith was the victim of what in hindsight was a rash decision by Virginia Tech to fire Seth Greenberg after his freshman season in Blacksburg. If they had kept a group which included future ACC POY (and 2nd-round pick) Erick Green, another guy whose gotten a cup of coffee in the NBA in Jarrell Eddie, Finney-Smith and a promising recruiting class headlined by Montrezl Harrell, the Hokies would have been one of the best teams in the conference. Instead, Finney-Smith wound up at Florida while Tech is now on their 3rd coach in 5 seasons with Buzz Williams.

After sitting out a season in Gainesville, Finney-Smith became a victim of Goldilocks syndrome at Florida. As a sophomore, he was a 6th man whose playing time was blocked by a group of four seniors who lead the Gators to a Final Four. As a junior, with those seniors gone and playing with a pair of McDonald’s All-Americans (Kasey Hill, Chris Walker) who weren’t able to live up to their recruiting pedigree, he was the best player on a team that finished below .500 and saw Billy Donovan leave for the Oklahoma City Thunder.

Finney-Smith went from a defensive specialist to a more all-around player, with his FG% skyrocketing from 37.1% to 47.2%. Most importantly from an NBA perspective, his three-point shooting went from 29.5% on 3.6 attempts a game to 42.6% on 4.1 attempts. While he may never be a standout scorer, all his offense really needs to do is keep him on the floor.

At 6’8 220 with a 6’11 wingspan, Finney-Smith is a plus athlete who should be able to guard at least three positions at the NBA level. With switching pick-and-rolls becoming increasingly in vogue around the league, the Florida senior has the quickness to hang with guards, the length to match up with the biggest wings and the strength to more than hold his own on the boards, where he was one of the most productive rebounders in the SEC.

Synergy doesn’t have a lot of defensive possessions for Finney-Smith as a junior, perhaps because there were easier ways for opponents to score against Florida, but performance on that side of the ball is really as much of an eye test as anything else.

It remains to be seen how House does as the lead player on a young A&M team and how new Florida coach Mike White does in his first season replacing the guy who essentially put the program on the map. If A&M and Florida miss the NCAA Tournament again, you probably won’t hear a lot about Danuel House or Dorian Finney-Smith. There are so many players coming out of college every year and there are so few spots available for them at the next level that it’s easy for guys to slip through the cracks.

No matter what happens in their senior seasons, though, House and Finney-Smith have shown they are long, athletic and capable of sticking 3’s at a high percentage over the course of a college season. Given the way the NBA is going, 6’7+ wings who can play on both sides of the ball and knock down 3-point shots are more valuable than ever. Every team needs guys like that and it starts with looking under every rock and taking chances on young players with those tools who have slipped below the radar for any number of reasons.