Notes From The 2016 Nike Hoop Summit 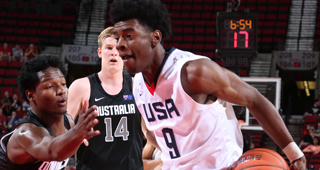 Josh Jackson: The last to arrive this week, Jackson walked into the gym filled with NBA GMs and scouts in khakis holding his bag and a box of Nikes minutes before the USA was set to scrimmage local players. Jackson has a confidence and charisma similar to Chris Webber at Michigan; he walks like a ballplayer. But he’s able to balance it without any arrogance.

Jackson is an energetic player and is unselfish and creative as a passer. Beyond the elite athleticism, even when compared to all of these other elite athletes, Jackson’s game comes most alive as a passer. I asked Jackson if he would be interested in becoming a point guard full time.

“I like to play team basketball,” said Jackson. “All three schools that recruited me said they'd like me to play some point guard at some point. But long-term, I see myself as a wing.”

Jackson has an awkward jumper at this point, bringing the ball up too far away from his body and with a hitch. Jackson’s shot is inconsistent, evidenced by an errant three-point attempt off the glass but he can also hit it if he’s open and in rhythm.

I asked Jackson if the way he brings the ball up is replicating the motion of shooting off the dribble and if he’s less comfortable in catch-and-shoot situations.

“I'm more comfortable shooting off the dribble,” Jackson told me. “It's kind of backwards.”

Jackson has a great understanding of space and how to fill lanes in transition. In Friday’s scrimmage, Jackson filled the lane on a fastbreak from the left sideline into the middle as he could see how the dribbler and the lone defender were drifting and he was able to set himself up to receive a drop off for the dunk of the week.

Jackson is a year older than the rest of the class and that clearly has a meaningful influence on his prognosis. Jackson is the most competitive player on the USA, possibly for better, possible for worse. Jackson nearly received a technical in a low-key scrimmage on Friday arguing a non-foul call. Jackson also was tangled up with DeAndre Ayton fighting for a rebound that led to a stoppage of play though it was relatively innocuous.

Jackson has the highest potential to become a franchise player out of everyone here, but he’ll need to fix his perimeter shot to get there and I would still like to see him as a full time point guard where he can have the ball in his hands as a playmaker for the team and not for himself as the first option.

Jayson Tatum: With great size, athleticism and all-around ability, Tatum is what you would get if you used a 3D printer to create a small forward. Tatum carries himself with more professionalism than anyone else on either roster and that makes you comfortable with his odds of at least reaching his floor. Tatum checks all the boxes.

But you worry about whether mechanical players like Tatum have enough imagination to become great. Tatum could become the Duke version of Harrison Barnes, who was also a Hoop Summit darling and heralded recruit who plateaued in the NBA for those very reasons, albeit as a player who will get a max contract. There’s little doubt Tatum will become an NBA starter but I’m not sure about him becoming a transcendent All-Star talent.

Harry Giles: Still recovering from a torn ACL, Giles was mainly a cheerleader for the week but he was an engaged participant.

Jonathan Isaac: Isaac is a smooth athlete with great off-ball movement and finds open space really well. Isaac has good mechanics on his jumper though he air balled a three-pointer in the game and shoots a knuckle ball.

Isaac has a good first step off the dribble to get to the lane or to create space for his mid-range jumper, though that's hardly necessary given his length. Isaac made a great touch pass in the air in the third quarter, using his vision well.

With so much length and athleticism, Isaac also has enough skill to play small forward.

De’Aaron Fox: Fox is a lefty point guard with a wiry build and is really tough both mentally and physically. Fox made a great pass in transition through three defenders for an easy layup in scrimmage, but he also is prone to excessive unforced turnovers.

Fox is a really good on-ball defender and can pressure the other team’s point guard baseline to baseline. Fox also will rebound well for his position as a longer guard.

Fox creates space for himself really well off the dribble and is a crafty finisher. Fox also has a smooth three-pointer, especially above the break. The promise of his three-pointer to be in the high 30s makes him the best point guard prospect to play in this game in several years.

Markelle Fultz: Fultz controlled the game well at the point guard position with the USA’s second unit, distributing the ball and also calling his own number. Fultz had a notable spin move off the bounce into a jumper from the free throw line. Similar to another Washington player Brandon Roy, Fultz can slide between both guard positions.

Fultz also found Isaac for a nice lob in the second half.

Fultz had a consistently impressive week and will be a favorite to win Pac-12 Freshman of the Year if Jackson doesn’t commit to Arizona.

DeAndre Ayton: Ayton has the perfect build and level of athleticism for a modern big. With explosion to the rim and a tremendously promising jumper, Ayton is an early frontrunner to go first overall for the 2018 draft.

Ayton has great mid-range jumper potential but his flat trajectory is an issue when he steps back to the three-point line. Ayton gets his lower body into his jumper well and it should be a dependable part of his game.

Ayton had an athletic lay-up in traffic but he generally had too little to work with on a bad World Team and the USA was able to send too many athletes at him whenever he was in a position to score. Ayton tried to go to work a few times in the post, but he couldn’t get going at all.

Jarrett Allen: Allen has a throwback game and throwback look for a 6’11 big. Allen is agile and uses his length well but doesn’t have game-changing athleticism or skill level.

Allen thinks of himself as a stretch big and he has a long ways to go on the consistency of his shot, though he made a buzzer-beating three-pointer to end the game.

Terrance Ferguson: For most of the week, Ferguson looked like just a guy but he had five second quarter three-pointers. Ferguson finished 7-for-11 on three-pointers for 21 points. Ferguson doesn’t have a strong handle and he’s an average passer, but he’ll shoot it well spotting up on the perimeter.

Ferguson is a good defensive player as well with good athleticism, so he’s at worst a promising 3&D prospect.

Wenyen Gabriel: A raw skill-set and frequently lacks focus big but he also has a great jumper from 3. Gabriel will never be a complete player but he will get to the point where he does 2-3 things really well to become an asset. Gabriel needs some bulk to defend other bigs but he has good lateral quickness and disruptive length switching onto guards in the pick and roll. Gabriel grew on me as the week progressed.

Udoka Azubuike: Despite a larger frame, Azubuike is deceivingly mobile with consistent lift. In the game, Azubukie was overwhelmed by the quickness and swarming athleticism of the USA where he was unable to make an impact.

Kostas Antetokounmpo: His jumper has excessive arc but is fluid and should be above average for a player of his height. Antetokounmpo doesn’t have the extreme length of Giannis and is also not quite as athletic. Antetokounmpo is unmistakably getting extra attention due to his brother and also how players with his length and skill-set are so coveted with where the league is going in positionless basketball, but the skill level remains raw. Kostas is a better shooter than Giannis but he’s not even close in any other consequential way at this point.