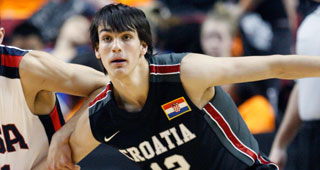 If you didn’t get to watch Dario Saric play for the Croatian National Team at the junior level or for Cibona Zagreb, you won’t understand what the interest behind the six-foot-10 combo forward is all about.

In his two-season stint with Anadolu Efes, the 22-year-old Croatian was utilized almost entirely as a pure weak-side threat, save for the times he was shifted to center in emergency situations.

Head coach Dusan Ivkovic had a point guard in Thomas Huertel with limited ability to work off the ball and who was also a massive liability on defense. So in order to maximize him, Ivkovic built an offense where Heurtel monopolized shot creation responsibilities and left little room for more promising but less developed options like Saric, Cedi Osman, Elijah Johnson, Derrick Brown and Furkan Korkmaz to stretch their wings.

As a consequence, it’s unclear how much Saric’s ball handling and passing developed over the last two seasons, whether the shot creation from the perimeter against a set defense he showed with Cibona at the Adriatic League level could be sustained against a higher level of competition.

Saric was not given much opportunity to explore his best skill last season.

Previously, he had shown the ability to handle in pick-and-roll and pass out of the dribble penetration, showcasing the sort of anticipation skill that suggests Saric could also be an option as a screener as well, shorting his rolls and assisting spot-up shooters beyond the three-point arc or big men at the dunker spot.

But he was not utilized those ways at Efes. And he was also rarely relied on to help facilitate offense from the elbows.

Where Saric mostly flashed his passing in his stay in Turkey was out of the low post against switches. He has not shown to be a particularly killer scorer on those instances but most opponents felt more comfortable doubling him anyway. Saric often used his escape dribble with a lot of calm and darted cross-court passes to weak-side shooters on the opposite end of the floor, as his six-foot-10 height helps him see over the defense in traffic.

In his first season at Efes, Saric had proven himself able to attack closeouts with enough burst to draw help defense and was also more comfortable grabbing a defensive rebound and leading the break. But towards the end of his second season, he didn’t show as much explosiveness to blow by those closeouts as well, despite the fact he played in a well-spaced four-out offense with plenty of capable shooters around him, and he was either not as confident or drilled by his coach into no longer playing in transition.

Underutilizing his ability to help create for others is frustrating because Saric is at best a so-so scorer at this point of his development.

His most productive asset is his catch-and-shoot three-point shot but he’s only proven capable to hit open shots with his feet set and no one rushing his release. Saric converted 40% of his 172 three-point shots last season but only at a pace of 4.8 attempts per 40 minutes, as he was not put in the pick-and-pop or asked to come off screens at all.

But the area Saric excels best is as a cutter, showcasing excellent feel for identifying gaps in the defense and making himself available around the rim.

As a shot creator out of straight isolations, he is a mixed bag. Saric has shown in the past a nice handle for someone his size to go side-to-side but can’t stop-and-start in a pinch and doesn’t have a lot quickness to shift directions and shake opponents with crossovers. His first step is not particularly explosive among pros but he has long strides on face-up drivers out of the mid-post and is able to maintain his balance through contact against players of a similar physical profile.

As a scorer, Saric has not shown much burst to attack length at the rim with explosiveness but has shown nice touch on non-dunk finishes and his 223-pound frame invites contact, leading to a very appealing 38% free throw rate a couple of years ago, though it declined to 29% last season.

He remains a lousy pull-up shooter, too rigid elevating off the bounce.

Saric did not screen in the pick-and-roll much but when he did, he put to use that ability to know the right spots to roll towards. Saric has soft hands to catch the ball on the move but has not flashed much potential to play above the rim as a target for lobs. He is a threat to pursue the ball on the offensive glass when he’s well positioned but lacks length to rebound outside of his area and also explosiveness converting these second chances into immediate putbacks.

Much like his scoring, Saric’s defense is also average at best.

He plays with good effort in individual defense, able to bend low to the ground to get in a stance. Saric has proven capable of holding his own on straight line drives by pure wings like Elliot Williams and Mindaugas Kuzminskas – two players that could be considered NBA-caliber. Defending Williams in the game against Panathinaikos on a dribble drive out of a closeout attack, Saric even flashed the ability to elevate out of the two feet in a pinch to block his shot at the rim.

But he has not proven capable of switching into smaller, shiftier guards on an island, lacking the lateral quickness to stay in front in isolation when they shake him side-to-side or navigate over ball screens and recover in time to contest shots or shut down passing lanes as a trailer.

Defending as a big, Saric struggles to hold his ground in the post against bulkier power forward types and lacks length to contest outside shots effectively when he is closing out to stretch fours. As a help-defender, Saric is attentive to his rotation responsibilities but can’t play above the rim as a shot blocker – picking up just 51 blocks in 126 appearances over the last two seasons.

His most productive asset on that end is his rebounding, as he’s proven attentive to his box out responsibilities and pursues the ball off the rim with nice energy – collecting almost 23% of opponents’ misses when he was on the floor last season.