How Masai Ujiri Approached The Deadline With LeBron In Mind 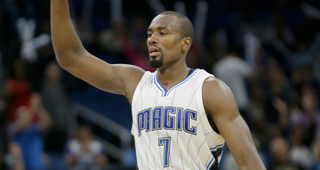 When it comes to trade deadlines, chasing stars captures all the attention. Yet while DeMarcus Cousins changed his address and teams negotiated for the services of Jimmy Butler and Paul George, the Toronto Raptors might have just joined the ranks of the true title contenders. By dealing for Serge Ibaka and PJ Tucker, the Raptors have turned their biggest weakness into a strength while assembling a roster versatile enough to counteract the star-studded casts the team would encounter en route to a Finals appearance.

Before this deal, the Raptors' power forward situation was turning into enough of a hot mess it was causing the team to drift down the Eastern Conference standings. Entering the post-All-Star reboot, Toronto sits just a half game ahead of 5th place Atlanta, definitely not the direction the franchise was looking to head following their first appearance in a conference finals last season. With Kyle Lowry headed to free agency, the team’s contention window could close suddenly, which is why fixing their frontcourt situation became increasingly urgent.

At the start of the year, it didn’t look like a problem. Jared Sullinger was brought in from Boston for depth. Rookie Pascal Siakam surprised everyone with his energy, rebounding and defensive effort and earned a starting spot ahead of reliable veteran Patrick Patterson. But as the season has worn on, injuries, ineffectiveness and the limitations in Siakam’s game erased all that initial promise.

Aside from cuts to the basket, Siakam still offers up virtually nothing to an NBA offense right now. Not only is that an issue during the regular season, but it’s one of those things that becomes increasingly problematic and easily exploitable come playoff time as well. Perhaps it’s not a shock then to find out the Raptors' offensive rating rockets from 105.2 when Siakam plays to 113.2 in the 1,945 minutes the rookie forward hasn’t been on the court, per NBA.com data. And while Siakam is a high energy player, his defensive prowess hasn’t produced a positive effect on that end of the floor either, with the Raptors improving in his absence once again. That means that overall, Siakam has been a net negative in the 806 minutes he’s played so far this season.

It seems easy to suggest that the Raptors overused a rookie not ready for his role, but Siakam had to play.  Sullinger -- dealt along with two second round picks for Tucker -- spent most of the season strapped to the bench. In the 118 minutes he did play, Sullinger torpedoed Toronto’s offense to an unsightly degree (a ghastly 89.7 rating). And the Raptors were forced to give Sullinger those minutes because of another problem, Patterson’s injury woes. Over the past 25 games, Patterson sat out 16 because of a nagging knee issue. During that stretch, the team was so desperate for production from the 4-spot that they pressed the disappointing Sullinger and Siakam’s fellow rookie, Jakob Poeltl (a natural center), into service.

Essentially, Patterson was the only power forward on the roster making the Raptors look like a team capable of challenging for the East crown. Obviously Demarre Carroll, who fills that spot in the smallball lineups, can do the same, but Dwane Casey hasn’t been overly enthusiastic about deploying those undersized groups for big minutes during his tenure with the franchise. And despite Patterson’s impressive on/off splits -- the team outscores opponents by 13.2 points per 48 minutes, according to NBA.com -- the veteran big man has some limitations that the additions of Ibaka and Tucker will help cover.

The most notable is that Patterson is shooting sub 40 percent from the field. While improved as a spot up, 3-point shooter, Patterson doesn’t have the ability to get deep paint shots when chased off the 3-point line nor is he feared enough in the post to avoid teams switching any pick-and-rolls he’s involved in. On the other end of the floor, Patterson is heady and assignment-sure defensively -- which is criminally underrated and key ingredient to winning lots of games in the regular season, Patterson doesn’t have the game-changing defensive characteristics needed to shut down elite offenses in the playoffs. This combined with Patterson’s limited offensive arsenal, seem like nitpicky complaints for a player that’s clearly helping Toronto win games, but they are real deficiencies that put a ceiling on a team’s ability to compete for championships.

And make no mistake about it, these deals for Tucker and Ibaka weren’t just made to turn around this regular season slide down the standings (though they will also help do that). They were, for all intents and purposes, made to with the goal of toppling LeBron James and the Cleveland Cavaliers in the postseason. Getting past Cleveland is the only way Toronto takes the next step as a franchise.

That is obviously quite the task. And in order to understand how Ibaka and Tucker help bridge the gap between these two clubs, it’s best to explore what makes James and the Cavs such a problem for a team without much defensive versatility.

Under Tyronn Lue, the Cavs have become a speedier, more creative offensive outfit. Cleveland noticeably runs more, especially off opponent’s misses. That has help bump the team’s overall pace from the bottom three in the league last year, to the top half -- 14th to be exact -- this season, per our RealGM database. In the halfcourt, Lue has several tricky sets that involve inverted pick-and-rolls, Pistol action or some crafty play that involves Kyle Korver screening for a teammate before scampering off another pick for an open look in different spots across the court.

The quicker pace and clever additions to the playbook mean that keeping up with James isn’t about some epic 1-on-1 battle between him and a lone wing defender. Within this new system, James uses his cerebral approach to identify and destroy mismatches caused by either the Cavs tempo….

In the first clip, James’ leaking out combined with an aggressive push up court leaves him on Suns rookie Marquese Chriss. Immediately, James flashes to the weakside block, calls for a ball reversal and goes to work on the youngster for an “And 1.” In the second clip, the Cavs are in Pistol -- a fluid, transition concept calling for some combination of a guard and big using screens or quick pitches with the ballhandler to create openings in the defense. JR Smith’s initial screen forces Orlando’s Aaron Gordon (guarding James) to swap assignments with his teammate, Evan Fournier (guarding Smith). James once again recognizes the mismatch, goes to work and produces the highlight reel dunk.

Before this turns into a full-blown “LeBron James is good at basketball” segment in the middle of this Raptors' opus, let me bring this back around. Before these deals, Toronto was pretty much counting solely on Carroll to go toe-to-toe with James and hopefully slow him down enough that the Raps sneak out four wins. Clearly not the most promising proposition. The reason the additions of Ibaka and Tucker have the potential to be so impactful are because they will give Casey and Toronto more options for combating the James-related headaches that pop up not only game to game in playoff series, but possession to possession.

Casey can now trot out a number of lineup combinations involving Carroll, Tucker, Ibaka and Patterson that help snuff out these advantages the Cavs feast on most nights. Things like transition cross-matches -- similar to the one involving Chriss above -- are less worrisome in lineups with three of those four Raptors on the floor instead of just Carroll. The physical Tucker can guard bigger players while the mobile Ibaka can hang with James and other perimeter cats. There just isn’t an offensive combination that Cleveland can trot out that Toronto now can’t match defensively. And the best part of that is, without having to use Siakam, the Raptors won’t sacrifice offense to do it.

Ibaka is shooting a career high from 3-point territory and has a turnaround jumper and running hook to use on smaller players in the post. Tucker’s hardly a refined offensive player and boasts a middling 3-point percentage on the surface, but can derive value for a team’s offense in a key spot: corner 3’s. In three of his past four seasons, Tucker has converted at least 36.1 percent of his shots from the most valuable 3-point shot in the game -- which makes him a massive upgrade over the young Siakam.

It’s unlikely that Toronto, even with these upgrades, make a push for regular season glory. The team currently sits 7.5 games back from the Cavs. Even the Celtics, currently second in the East, are four games ahead of the Raptors and will be tough to catch. But these moves for Tucker and Ibaka weren’t made with the next 25 games in mind. Instead, Toronto made these deals to create a deep, versatile roster capable of meeting and toppling Cleveland this postseason.