Notes From The 2017 Nike Hoop Summit 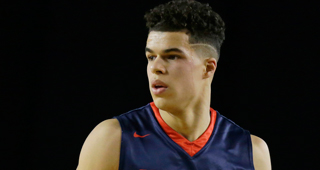 The 2017 Nike Hoop Summit was expected to be lopsided with the World Team having a weaker than expected roster without DeAndre Ayton, but the game was scrappy with the USA’s deficient guard play keeping it close deep into the fourth quarter. The United States ultimately won 98-87, pulling away with a couple of Michael Porter Jr. dunks in the final minute.

Michael Porter Jr.: Regardless of your position on the NBA’s one and done rule, Porter is the impeccable example of a player that it should not apply to. Porter is too developed physically, mentally and in terms of skill to endure the charade of being forced to play one season of collegiate basketball. Porter is far too good for it and should have the opportunity to begin his NBA career immediately. Washington’s decision to fire Lorenzo Romar, which led him to decommit and end up with Missouri makes the situation even more egregious.

Porter is the best prospect at the Nike Hoop Summit in the four straight years I’ve been here. If Porter continues his current trajectory, he will be the best wing prospect to enter the draft since Kevin Durant in 2007. Porter is polished in all facets of the game and can score however he wants, wherever he wants. Porter plays with a high level of physicality and tremendous balance.

Like most players of his skill level, Porter doesn’t seem consistently committed on defense, but he’ll be able to have an on/off switch on that end, and his elevation will make him an occasional weakside rim protector.

Porter would be picked ahead of both Markelle Fultz and Lonzo Ball if he were eligible this year.

Wendell Carter Jr.: The power forward position has transformed over the past decade with the game going smaller and the compounding problems of playing two traditional bigs. Carter has the classic frame and skill set of what we have always considered for a power forward except he can also shoot three’s.

Carter is more basketball athletic than bouncy athletic and his game is predicated on skill and craftiness, but he’s also long enough and quick enough to not be limited. With a strong base, Carter will be able to slide between power forward and center, and rebound well at either spot.

Carter struggled in the game despite what should have been an easy advantage over the World team’s bigs. Carter is more of a halfcourt player and the often frenetic pace of the game will never be where he looks best.

Mohamed Bamba: The 9’6 standing reach and 7’9 wingspan is plainly extraordinary, but he pairs that with a good natural feel for the game. Bamba has good mechanics on his three-point shot and is comfortable with that range, giving him unicorn potential (Myles Turner edition) as a rim protecting center who will space the floor on offense.

Bamba’s skill level in the post is rudimentary but has potential. Bamba is adept as a passer, especially after collecting a defensive rebound when he’s looking to quickly get the ball out to a ballhander to initiate the transition game.

On the opening play of the game, Bamba made a highlight reel play where he blocked a drive at the basket and managed to grab the ball and throw it off the World Team player out of bounds to give USA the ball.

The game sped up a little too much for him as it progressed where the USA went with a less traditional center.

Jaren Jackson Jr.: Despite Shawn Marion-level awkward mechanics, Jackson is an effective perimeter shooter and that completely changes the outlook for his career as a stretch big and not strictly an athletic rim runner. Jackson is 6’10 with a 9’1 standing reach and 7’4 wingspan. Despite his length, Jackson is quite strong already.

Jackson is smooth around the basket with good court awareness where he can use his length and lift to finish efficiently. Jackson also has a good handle, though he’s not yet at a place where he can break down his man in the halfcourt.

Jackson made several good defensive plays, including a showstopping block at the rim in which he came from the weakside. Jackson had the single biggest impact on the game for the United States in the first half, scoring 11 points to go with six rebounds.

Collin Sexton: The most outwardly competitive player of this year’s pool, Sexton is an athletic 6’2 point guard that will be really fun to watch running the entire show for what will likely be one season at Alabama. Sexton has the type of swagger that we don’t see as often anymore when most players at this elite level are almost excessively polished and boring, realizing their lives are already a series of million dollar auditions. Sexton is from Georgia, but he’s an archetypal New York City point guard that has become less common in the age of analytics.

Sexton has a good handle and is an imaginative and fearless passer. Sexton does a great job buying time with his dribble to allow cutters time to get to the basket, anticipating the flow of movement. Sexton will sometimes overdribble and can’t always channel his energy efficiently.

Sexton’s worst case scenario is as a tempo changing backup point guard, but he could be far better than that if he develops as a shooter and plays under control. With his no-chill demeanor, he could be an all or nothing type player.

Trevon Duval: Duval had moments during the week but seemed to coast at times and was injured early in the game though he did return in the second half.

Kevin Knox II: Knox has a great physical profile for a combo forward but his skill level and feel for the game has a long ways to go.

Jarred Vanderbilt: Like Knox, Vanderbilt has the profile of a combo forward but doesn’t have the type of skill to create offense for himself. Vanderbilt plays with a high motor, however, where he consistently impacts the game. Vanderbilt has some promise as a perimeter shooter and that will determine how playable he is long-term.

Gary Trent Jr.: Trent is a stronger guard that doesn’t do a single thing exceptionally well but can do everything. Trent can be a primary ballhandler and can shoot off the catch but isn’t an explosive scorer. When Trent scores, it will be within the flow of the offense or with a savvy shot fake to create separation.

As trite as it sounds, Trent plays winning basketball and that cliché will undoubtedly be expounded with however long he remains at Duke. In the NBA, Trent should have a long career with his versatility.