Why George Hill Is The Key To Sacramento's Rebuild 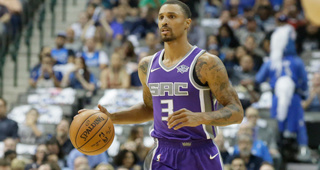 In their first full season post-DeMarcus Cousins, the Sacramento Kings have shifted their focus from building a capable roster around him to blossoming into a playoff contender a few years from now.

With eyes on guiding their young core, the Kings signed Vince Carter (40), Zach Randolph (36) and George Hill (31) this past summer. Of those veterans, Hill is the most important. Not only did he sign for three years (Carter for one, Randolph for two), but Hill has nine years as a very effective point guard under his belt.

Three weeks into the season, the Kings have a rotation comprised of eight players with two or fewer years of NBA experience. Rookies De’Aaron Fox and Bogdan Bogdanovic are among the team’s leaders in minutes and points scored.

Vivek Ranadive may have salivated over Buddy Hield as the centerpiece of the Cousins trade with the New Orleans Pelicans in February, but Fox is the player the Kings must develop into a superstar if they want to expedite their rebuild.

That’s where Hill comes in.

“I definitely go to him for scouting reports and stuff like that, but it’s everything,” Fox said of Hill. “I ask him how the hotel is that we’re staying at, how’s the arena, where to eat, how’s everything.”

There are only 10 players in the league younger than Fox, including teammate Harry Giles, who won’t play until at least January (knees). That makes a veteran presence paramount to Sacramento’s ability to take the steps they must in the ensuing years.

“He’s a voice of experience and a built-in scouting report of the league,” Dave Joerger says of Hill. “He knows all the other guys and what they like to do. Guys like De’Aaron see it on video and hear it, but George has the experience to say what he likes to do with this guy; he tends to go this way or when he itches his eye twice he’s going to crossover, whatever it might be. He shares a lot with those guys.”

When he was introduced in Sacramento in July, the Kings might as well have put “Fox Mentor” on Hill’s placard. He said he would take the rookie under his wing and he’s done just that.

“He’s been great for me. Having somebody that’s gone through the process and has played at a high level for so many years and has been on playoff teams, it makes it easier to get through this,” Fox told RealGM. “I have someone to lean on if I need help playing the point guard position.”

Hill is the type of player that fits on any team regardless of construction and expectation -- he can defend, score, facilitate, lead or blend into the fabric. He’s been a veteran presence since landing with the Indiana Pacers as a 25-year-old, but he’s also never been on a truly bad team. He’s preached about viewing the season as a marathon and not a spirit, something that will likely test him personally as well.

Hill has missed the postseason just once in his career and his clubs have won an average of 50 games. It may take two seasons to win that many with the Kings. Still, his mentorship, much more so than his own play, will be the key to Sacramento ending a playoff drought that is bleeding into his twelfth season.

“I was fortunate I had Manu [Ginobili], Tim [Duncan], Tony [Parker], Mike Finley, Kurt Thomas, Fabricio Oberto, Bruce Brown and so many different other guys,” Hill said of his time as a younger player in San Antonio. “I was fortunate enough to have 10, 11 veterans at the time, which prepared me for this.”

When asked about how he handles all the team’s young players, Joerger mentioned trying not to “hit them over the head” every time out and cleared stated Sacramento’s focus by admitting that “this is about where we’re going to be two years from now.”

Every rookie enters the league under a different set of circumstances, which has made the approach to development complicated and without a one-size-fits-all approach. We’ve seen Ben Simmons and Joel Embiid excel after essentially taking a “redshirt” year(s) due to injury. They weren’t thrown to the wolves. Part of the reason they’ve been successful is that they spent a year adjusting to the league before being asked to contribute on the floor.

Hill acknowledged that every player is different, but he would never leave young players like Fox alone in the NBA waters without guidance.

“You don’t want to put anybody through things by themselves,” he said. “No one got to where they are now by their self. It takes a little help and a little guidance. As long as I’m here, I’m gonna be here for them to help them try to become a better player.”