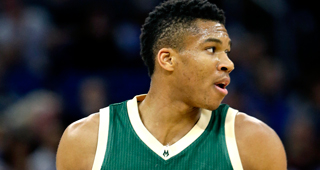 Giannis Antetokounmpo is far-and-away the best player in the first round series between the Milwaukee Bucks and Boston Celtics. That would typically make the Bucks the favorite to advance, but the personnel around Giannis, coupled with their chosen style of play, has placed a ceiling on how far he can take them.

The Bucks don’t subscribe to the modern philosophies of the Rockets and Nets, who both preach the power of the three-pointer, which takes away the most conventional way to create space. They ranked 25th in attempted threes during the regular season and they don’t shy away from the mid-range game as drastically as most teams do in today’s game.

Still, they were far from inept offensively. The Bucks finished the season with a 109.8 offensive rating (ninth), .571 TS% (sixth) and .531 EFG% (eighth), while playing with one of the slowest paces in the league.

The Pacers are very close to the Bucks statistically in terms of both pace and threes attempted, but were four wins better thanks in part to a better defense. That aside, Indiana doesn’t have anyone with Antetokounmpo’s versatility -- there are only a handful of teams in the league that do -- which makes how they oftentimes look on offense all the more frustrating. Any and all offensive limitations are magnified during a postseason series, especially when facing a coach like Brad Stevens.

Giannis shared the paint with John Henson throughout Game 1, which worked more often than it should have thanks to his deft passing. Henson got several good looks at the rim because of the attention the Celtics had to pay to Antetokounmpo. That’s all well and good, but wouldn’t you prefer to keep the ball in the hands of a future MVP as much as possible?

“Every team is going to talk about spacing and for us, for sure. We have to make sure that, one, we space the floor and that starts in transition,” Joe Prunty said. “When we run, we want to run and try to get layups and easy baskets. Once we get into our sets, then we want to execute them sharp and be on point with where we are on setting screens. Then after -- we call it the play after the play -- being ready in our spots and spacing the floor like we need to. That could be utilizing the corners, making sure we’re up at the wing.”

In transition, the Bucks have the tools to be effective with athletes like Giannis and Eric Bledsoe, and a threat from deep like Khris Middleton. It doesn’t help that the hoarding of players with long wingspans failed to create an elite defense. In the halfcourt, they too often fail to create enough space for Giannis to attack.

That doesn’t mean shooting threes at a Houston-like pace, but adding a more modern big to play alongside Giannis while Thon Maker develops would certainly help. As would more three-point shooting -- only Tony Snell and Malcolm Brogdon shot better than league average from three and logged more than 750 minutes in total. It’s worth noting that a healthy Mirza Teletovic this season would have gone a long way towards fixing that.

At the micro level, the Celtics packed the paint in Game 1 to limit Giannis and he still managed to score 35. The Bucks brought Henson out further right off the jump in Game 2, which created more driving lanes. Not surprisingly, Giannis was even more efficient than he was two days earlier, missing just four of his 17 attempts en route to 30 points, nine rebounds and eight assists.

The only reason he did score more? The Bucks only got up 77 shots and turned the ball over 10 more times than the Celtics.