Enjoying Dame And CJ In The Rings Or Nothing Era 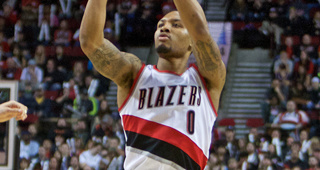 Most basketball fans would say that basketball is the most creatively expressive sport on the planet. There are 30 different places a basketball team can end up, but there are countless ways to end up in any one of those 30 spots.

To be as good as the Portland Trail Blazers, for example, takes talent. It can be accomplished through any number of styles or types of players. You could be as good as the Blazers from a wins-perspective by having two great big men and an average backcourt. You could do it with a defensive identity. But how a team gets to where it ends up is always dictated by what its best players are good at and capable of.

It doesn’t exactly take a deep analysis to conclude that the Blazers are as good as they are because of Damian Lillard and CJ McCollum. The entire Portland roster outside of their starting backcourt is made up of one-dimensional, replacement level, or flawed players. The Blazers being anything other than a lottery team requires Lillard and McCollum to not only be exceptionally good and have excellent chemistry with each other, but to understand how to take advantage of what their marginally talented teammates are good at. To love basketball for the diversity of what the game offers, should be to appreciate getting the opportunity to see Lillard and McCollum play together.

But in 2018, the gut reaction is to view them through particular lenses: That they aren’t good enough. That’s because in 2018, we have some understood formulas for winning with anecdotal evidence. Lillard and McCollum alone don’t have enough ingredients for those formulas. So can we watch them without thinking, “What’s the point?”

In the late nineties and early aughts, it was rare for an NBA team’s two best players to make up their starting backcourt. You needed a Shaq, a Duncan, or a player that could respectably do battle with either, or at the very least a balanced team with a very good guard and a very good big man. When teams did rely on a point guard and a shooting guard to carry them, however, we talked about them as fun little darlings, and tried not to dwell on their inefficiencies. That’s both because those teams were always fun to play with in video games and because we didn’t really talk about efficiency back then. Besides, there was only one Shaq, so how much could we really blame any team for not having him? So if the pre-Yao Rockets tried to throw out Steve Francis and Cuttino Mobley in a game against the Lakers, we celebrated it as the best form of “Beat LA!” underdog-dom the NBA had to offer short of an Allen Iverson. What else, we’d think, is the regular season for if not that?

Lillard and McCollum are not that. They are not inefficient gunners. Their shot making is automatic, but they’re both so good at dancing their way through screens, dribble hand-offs, and crossovers to get to the places where they hit those shots. But as shot-hunters, what’s so refreshing to watch is their patience with each other to both let the other go get buckets. They are both very aware of how good the other is, and they are aided by a Terry Stotts-system that keeps the ball moving until one of them sees the right move to make.

But “not having Shaq” isn’t a valid excuse anymore. If you aren’t great, you should be terrible. Why pay two players who are excellent at something when you only need one? Why make two-pointers when you can make three-pointers? There are plenty of backcourt-dominate teams now, and they follow patterns and formulas to success. The Splash Bros are two of the five best shooters ever. Last season, the Rockets used Chris Paul and James Harden in a pick-and-roll-centric, drive-and-kick offense that was some sort of formulaic compromise between player creativity and designed structure.

When the Blazers play the Warriors, the underdog narrative is almost nonexistent. Even when they beat a true contender, the reaction comes closer to an eye roll than it does court storming. The Warriors are better, so what are the Blazers even trying to do? Get on their level or stop acting like you’re competition.

That apathy misses the point, though. To focus on the Blazers’ ceiling is to ignore the fact that each win they tally requires something awesome from at least one of their stars.

Lillard and McCollum have to work hard for their shots. That’s not a great sign for long-term efficiency. But watching a player work hard to make a basket that’s difficult to make is actually really enjoyable. Watching players do things on the basketball court that we, as spectators, can’t do is sort of the point of watching the game, right? That’s not to say that we should be seeking out inefficient styles of play to watch. I have no interest in watching DJ Augustin and Evan Fournier run the Blazers’ offense. But Lillard and McCollum score doing what they do. They win more games than they lose doing it. And they can beat good teams doing it. Watching two players make tough shots to beat a team with more accumulative talent is a blast. But it’s hard to live in that moment without thinking “Congratulations on one of your 46 wins.”

The reason Lillard and McCollum are locked into huge contracts is because there aren’t a lot of living humans better at basketball than them. Lillard is third in the NBA in offensive win shares. McCollum is scoring exactly as many points per game as Klay Thompson on two less shots per game this season. You keep obvious talent in case you draft or find less obvious talent. Draymond Green’s brilliance was discovered because Steph and Klay were so good that the Warriors knew what kind of puzzle pieces to look for.