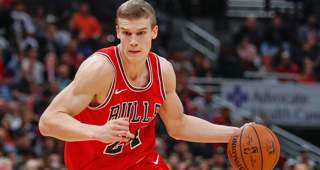 Shooting the ball is the most technical skill in the game of basketball. When we’re talking about elite shooters (humans better at shooting than you or I are at literally anything), we don’t compare their shooting forms as a means of determining who’s the best. Their forms might differ slightly, but they’ve become such masters of repetition that it’s ultimately irrelevant. We judge them by how their shooting handles circumstances. How well does their shot maintain its reliability the farther conditions get from shooting alone in an empty gym, or as NBA scouts and general managers have to consider, from whatever league rookies were playing in prior to the NBA?

It’s an important distinction to make because players whose elite skill is shooting typically have a handful of other weaknesses, whether it’s defense, playmaking, or something else. So even with attempts to mitigate those weaknesses, their NBA survival still requires elite shooting. Dirk Nowitzki, for example, learned to play smart defense and become an instinctive passer, but even so, if he were a 38 percent shooter there would have been no place for him in any era of the NBA. In reality, he’s a 47 percent shooter and playing in his 21st NBA season.

So, how does one know whether a great shooter is going to remain a great shooter when faced with NBA defenders, the fatigue that comes with playing defense against NBA players, and a farther 3-point line? The answer is one does not know. Dragan Bender was drafted fourth overall in 2016 because of his shooting. He has shot 38 percent since coming to the NBA. Bender is decidedly not Dirk Nowitzki.

That’s all to say that drafting a Dirk Nowitzki, a Steph Curry, or a Bradley Beal can seem like a scary proposition because it carries with it the inherent possibility of producing a Bender, a Jimmer Fredette, or a Ben McLemore. The latter list is much longer than the former.

The Chicago Bulls tried to sell their fans in 2017 on trading Jimmy Butler, a dogged and intense defensive player with proven efficiency, for the rights to draft Lauri Markkanen, a guy who would need to maintain an elite shot to hold any real value. Somehow, a year later, even after Butler helped Minnesota to the playoffs, and the Bulls tanked away a season, it actually looks like the right decision.

What exactly Markkanen can become in the future is hard to say, but his shot translated to the NBA very smoothly, and at seven feet tall that makes him something the Bulls can put a high value on: an offensive weapon. There are big men that are capable enough at shooting to at least be a threat behind the three-point line, and then there are players like Markkanen who you might draw up plays for a three-point shot. Volume three-point shooting from a big man requires the relative speed to get to the right spot. The player can’t be clunky. He has to offer the threat of a pump fake and drive.

Markkanen made 144 three-pointers as a rookie last season. Wide open, he’s cash. Contested, he’s still a decent option. If you feature him in your offense, he will score points. Returning from elbow surgery in the offseason he seems a lock to score 18 points per game as a 21-year-old, which is no small thing.

As a rookie, he struck the balance of translating his shot and mitigating his weaknesses enough to warrant the playing time he was getting. Those weaknesses were still there (he doesn’t look like much of a help defender), but he looked far from lost on the court and was a solid rebounder who at least played like he knew how large of a human being he is.

Once it’s established that a great shooter can handle the elements of the NBA then some are able to add elements to complement their shot, sometimes with legendary results. Nowitzki weaponized his height and skill with footwork that made him virtually un-guardable. Curry’s ball handling and playmaking meant he didn’t have to rely on anyone else to get his shot off. Ray Allen made running off multiple screens a part of the repetition and form of his shot. They’re all first-ballot Hall of Famers.

Markkenen isn’t likely to approach that type of career, but the Bulls have essentially until 2022 to get a better gage for his ceiling and how correctable his weaknesses are. Does Zach Lavine have the playmaking savvy to become the perfect pick-and-pop partner with him? Can he and Wendell Carter Jr. form the right combination of size and skill to share the court together?

Comparisons to Nowitzki aren’t fair to anyone, but one thing Markkenen shares with the German is that being characterized as “a seven-footer who can shoot” is an understatement. Competency is what Anthony Tolliver provides with his shot. Markkenen would beat most of the NBA’s point guards at game of H.O.R.S.E. He only played one season at Arizona, but is likely the best seven-foot shooter in NCAA history. If we’re to believe Kevin Durant’s official listing of 6’9, then Markkenen might just be waiting for Nowitzki to retire to be the best seven-foot shooter in the NBA. One guy has held that title for about 20 years, and it brought a lot of success with it.