Bradley Beal will not play in the NBA's return-to-play plan in Orlando due to a shoulder injury.

Beal's status had remained uncertain over the past few weeks.

The Washington Wizards will also be without Davis Bertans.

The decision was made in full consultation with Wizards Chief of Athlete Care & Performance Daniel Medina, Wizards Orthopedist Dr. Wiemi Douoguih, Beal and his representation.

“Bradley did everything possible to be ready to play, but after closely monitoring his individual workouts we came to the conclusion that it was best for him to sit out the upcoming games in Orlando and avoid the risk of further injury,” said Wizards General Manager Tommy Sheppard. “Although he was able to play through the majority of the season with the injury, the layoff from March until now did not leave any of us feeling comfortable that he would have enough time to be ready to perform at the extremely high level we are all accustomed to seeing and agreed that not participating in the games in Orlando was the right decision.”

The Sacramento Kings shut down their practice facility after a member of their traveling party tested positive for COVID-19, sources told Sam Amick of The Athletic.

The facility will likely remain closed before the team leaves for Orlando on Wednesday.

The Bucks also shut down their practice facility earlier on Sunday.

Players or staff who test positive for the coronavirus must test negative twice before receiving medical clearance to enter the bubble.

The Milwaukee Bucks shut down their practice facility after receiving the results from the latest round of COVID-19 tests, sources told Adrian Wojnarowski of ESPN.

It is unknown if there was more than one positive test.

The Bucks will keep the facility closed until their traveling party leaves for Orlando on Thursday.

Any player who tests positive for the coronavirus must receive two negative tests before being medically cleared to travel to the bubble.

Share Tweet Discuss Feedback
Kristaps Porzingis On Adding New Elements To His Game: 'I'll Show It On The Court'

Kristaps Porzingis said that feels completely healthy after the long layoff, and is ready for the resumption of the NBA season.

"The extra time just gave all of us more time to recover from little things that we all have going on. Basically everybody has something, always, and we just play through it, so this extra time gave guys the opportunity to heal those little things, to be even in better shape and to feel better when we come back.”" said Porzingis.

Porzingis spent most of the lockdown in Latvia, where public restrictions were more relaxed than in America.

Porzingis added that he develop new parts of his game during the stoppage.

Jacque Vaughn discussed how he's developed a personal relationship with Kyrie Irving and Kevin Durant ahead of the Orlando restart.

Both Irving and Durant have been ruled out for the rest of the season.

Vaugh, who replaced Kenny Atkinson as interim coach of the Nets, is reportedly the favorite to take over the job on a permanent basis.

Vaughn added that he was excited by the possibility of working with the duo in the future.

"It’s great having conversations with them about the process of basketball and how they see the game. I look forward to more of those conversations, though, too.”

NBA players will be forced to arrange their own travel plans if they miss the scheduled COVID-19 test two days before their team's departure to Orlando, according to a league memo.

If a player drives to Orlando, they will have to pass two negative tests before returning to the court.

If a player flies commercially, they will need three consecutive negative tests.

Teams are scheduled to fly into Orlando next week.

Players who have tested positive must undergo two negative tests before they will be medically cleared to enter the bubble.

The team recently closed their practice facility after a second player tested positive.

The Herald is not reporting the names of the two players who have recently tested positive, though both are rotation players. 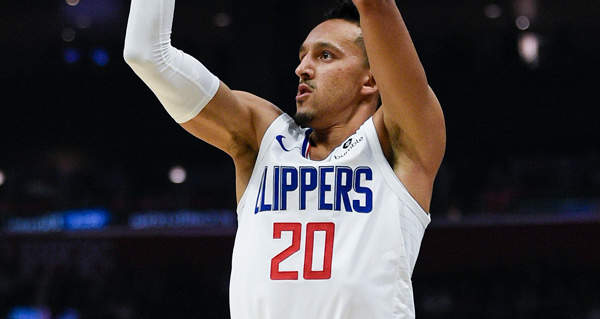 Landry Shamet tested positive for COVID-19 and is unlikely to travel to Orlando with the Los Angeles Clippers this week, sources told Shams Charania of The Athletic.

Teams will begin arriving in Orlando on July 7th.

Shamet is averaging 9.7 points and 1.9 rebounds on the season.

Sean Marks said that Kevin Durant will continue to be an active voice in shaping the future of the Brooklyn Nets roster.

“He continues to be a very loud voice in terms of where we’re going in the future and what we’re doing and I involve him like the other players and staff and how we’ll continue to build this team and how we move forward,” said Marks.

Durant previously ruled himself out of the Orlando restart.

Marks added that he's been in regular contact with Durant throughout the summer.

“I’ve seen him numerous times over the summer and watched the rehabilitation process and watched him getting back out there and so forth. … He’s always said he’s looking forward to getting on the court in Barclays. And I think all of us on this call, myself included, everybody in the organization is looking forward to that time as well.”

Michael Malone said that Nikola Jokic "feels great" and is expected to join the Denver Nuggets when they head to Orlando next Tuesday.

Jokic tested positive for COVID-19 last week, and is still in Serbia.

"Next Tuesday we depart for Orlando; the hope and expectation is that Nikola Jokic will be with us on that plane. From everything that I have heard and talked to him, he feels great, he feels fine and is excited to get back," said Malone.

Jokic is asymptomatic, according to sources.

The team also had to close its practice facility after two members tested positive.

"There is a chance we can open the gym up before we leave, depending upon results in the coming days. I am not going to get into who tested but we have had multiple people in our travel party test positive," added Malone.

Rudy Gobert Says Taste Has Returned, But 'Smell Is Still Not 100%'