Victor Oladipo Looking To Get Back On Track In Miami 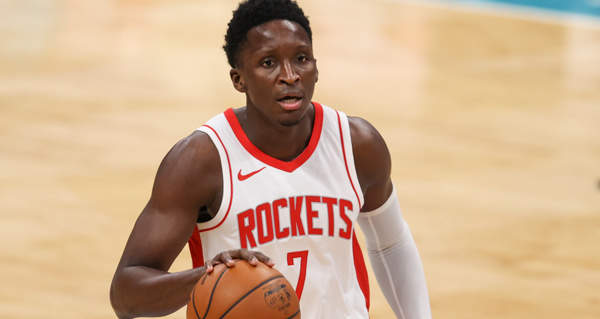 Victor Oladipo is at an interesting stage in his career after he was acquired by the Miami Heat at the trade deadline. Traded by the Houston Rockets for Kelly Olynyk, Avery Bradley and the right to swap picks in the 2022 draft, Oladipo joins a Heat team struggling to find consistency after a run in the NBA bubble when they reached The Finals.

The past four years have been a whirlwind for Oladipo. The eight-year veteran was traded by the Oklahoma City Thunder to the Indiana Pacers with Domantas Sabonis in the Paul George trade. Oladipo found his groove in Indiana, winning games and declaring Indianapolis “his city.”

Zipping by defenders on drives, nailing game winning shots and providing great defense, Oladipo managed to make the All-NBA third team and the All-Defensive second team. A solid first round series performance against LeBron James and the Cleveland Cavaliers only added exposure and credibility to Oladipo’s seat at the table arrival as a burgeoning superstar.

By his second season with Indiana, Oladipo suffered a ruptured right quad tendon in January of 2019. A rare injury, the only notable players to have suffered the injury were Tony Parker and Charles Barkley. The difference was that both Barkley and Parker suffered the injury in the twilight of their career. Oladipo was in his athletic prime and relied heavily on his speed and athleticism to be a difference maker.

Though Oladipo’s return to the court nearly a year after his quad surgery began with the bang of a game-tying shot in an overtime win, his return to the court has mostly been uneven. Oladipo struggled in the bubble, shooting below 40 percent from the field as Indiana was swept by the Heat in the first round of the playoffs.

This season, Oladipo has split time with the Pacers and Rockets. He was traded to Houston in the James Harden four-team megadeal as Indiana snuck in to acquire guard Caris LeVert, while offloading Oladipo. He is averaging 20.8 points, 5.0 rebounds, 4.7 assists and 1.3 steals over 29 games with Indiana and Houston. Oladipo has been a high volume, inefficient scorer this season, posting a usage rate closer to his peak 2017-18 campaign. He also has not played a back-to-back game since his return last season. The injury history and the inconsistent performances damaged Oladipo’s value on the trade market. Leading to the paltry return Houston received.

Another factor in Oladipo’s limited value was his contract situation. Headed for free agency this upcoming offseason, Oladipo reportedly turned down a four-year extension in the $25 million annual range from the Pacers and he recently rejected a two-year, $45 million extension from the Rockets. Either Oladipo knows that he can secure a contract or he’s betting on himself to prove that he’s worth a deal closer to the max.

For the Heat, it makes sense to acquire the former All-Star. Though they had also pursued Kyle Lowry during the deadline, he was expected to require a package involving young core pieces like Tyler Herro or Duncan Robinson or draft compensation. Oladipo’s market was less sturdy, allowing the Heat to acquire the guard without dealing a significant asset.

One thing about Miami and Pat Riley is that they keep all their options open. Since they are likely to have significant cap space this offseason, the Heat could pursue Lowry once again in free agency, and that could affect Oladipo’s standing with the franchise. It all depends on how Oladipo looks the rest of the season, and if he can contribute meaningfully to Miami’s late-season pursuit of homecourt advantage in the first round of the playoffs.

Oladipo wanted to be with the Heat. He spends his offseasons in Miami, and the Heat were one of three teams that Oladipo reportedly asked to play with directly in front of his Pacer teammates during the Bubble.

Much has been ballyhooed about the Miami Heat culture and how it has helped players prolong their careers, or find an extra gear. Maybe that will rub off on Oladipo. He’s still a quality perimeter defender, especially on-ball. Though he has not shot well from three overall this season, Oladipo is a much better spot-up three-point shooter compared to pulling up off the bounce. With playmakers like Jimmy Butler and Bam Adebayo drawing attention constantly, Oladipo could flourish in more of a supporting role.

Playing in Miami’s pass-happy offensive system (the Heat are second in assist rate), Oladipo should be able to have more opportunities to catch the ball off the move and create. The Heat have lacked secondary shot creation this season behind Butler and Adebayo, and it’s played a major factor in the team’s 25th ranked offense this season.

Oladipo going to his preferred destination could do wonders for the guard. While the partnership could become a win-win, Oladipo’s contract situation could make this difficult. Is he willing to take a paycut since he’s on a team more to his liking? Or is he dead set on earning a max contract that will take him into his early 30s?

These are all questions that will dominate the conversation around Oladipo the rest of the year, but in a lot of ways the buzzword of “culture” within Miami’s ecosystem can also work against Oladipo if he fails in their system. That future max contract might prove to be elusive and slip from Oladipo’s grasp.