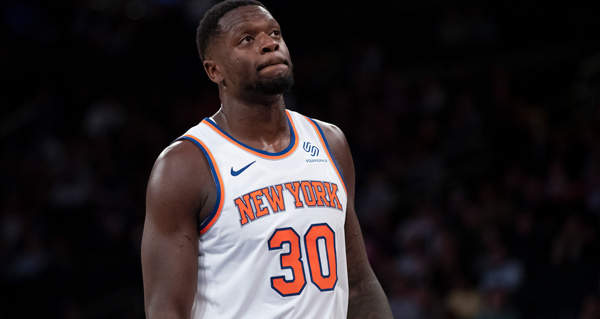 Lost within the bombast of basketball is like jazz, my man lies an uncomplicated truth: at any given moment, the central dilemma of a basketball game is neither self-expression nor a metatextual morality play. It’s how to put a ball through a hoop. To this end, the sport’s most valuable players through the ages are largely those who can simplify and achieve said ball-through-hoop process, regardless of how the intricacies of the game have evolved around them. Since the league’s inception, scorers have been stars and with good reason—if scoring were easy, everyone would do it. Arguably, the history of the NBA can be read through ad copy. Wilt Chamberlain, Michael Jordan, Kobe Bryant and Kyrie Irving may be different animals, but they’re the same beast--the same necessary beast—because at its heart, this game has always been, and will always be, about buckets.

Cut to 2021, where scoring seems easy and everyone seems to be doing it. While the upper bounds of the leaderboard remain fairly constant, the ranks of 20-point scorers have fattened with guys whose jerseys your kids will wear ironically to Coachella in 2036. As recently as the 12-13 season, only 11 players averaged more than 20 points per game; today, 43 do. Without context, Kobe Bryant’s 2008 MVP season looks starchy and humdrum compared to the cataclysm that Zach Lavine afflicts on defenses. Jerami Grant—Jerami Grant!—currently averages more points than Scottie Pippen ever did. Whereas 20 points per game once signified a certain level of signature-shoe stardom, it’s now almost an expectation--somebody on the Cleveland Cavaliers has to score points, so Colin Sexton might as well do it.

On a purely arithmetic level, there are more high scorers because the games are more high scoring. This season teams have played at the third fastest tempo of the last 30 years (trailing only the past two years) en route to 111.7 points per game, the second highest mark in NBA history behind last year’s 111.8 points. These extra points must come from somewhere, so it tracks that they’d be sponged up by each team’s spongiest players.

What’s more, offenses have rejiggered their attack to inflict maximum pain, allocating more possessions and touches to their best players. Although certain players have always commanded high usage rates, such diets were usually born from necessity; e.g., Kobe Bryant needed to hoover up the lion’s share of possessions during his post-Shaq blue period because the alternative involved letting Smush Parker cook. In 2021, this brand of ball-dominance has become the norm as teams realize that the easiest way to maximize their roster’s talent is to maximize the involvement of the roster’s biggest talents—in short, Luka Doncic will effect more winning with the ball in his hands than he would idling in the corner. As a result, 20 players have racked up a usage rate above 30 percent this season, compared to only five in 2013. From a birds-eye angle, this explosion of big-time scorers was inevitable. NBA offenses are as fast, smart and skilled as they’ve ever been—it makes sense that 20-point scorers are the rule as much as they are the exception.

If this narrative of numbers yanked from Basketball Reference spreadsheets could be assigned a human face, it would belong to Shai Gilgeous-Alexander or Julius Randle, two players whose current seasons occupy the nebulous space between pretty good and historically great. Free from the expectation of actually winning games, Gilgeous-Alexander spent the year growing into a superstar role alongside a dozenish blandly mediocre NBA basketball players and one Aleksej Pokusevski. On a roster without much other creative juice, Gilgeous-Alexander assumed an outrageous creation burden with startling ease, varying his stride and speed to slip through defenses like water through their hands. Prior to injuring his foot last month, he simultaneously sported the highest effective field goal percentage of any point guard and the highest percentage of unassisted makes (per Cleaning the Glass). To be sure, a player as gifted as Gilgeous-Alexander would probably flourish regardless of his role or situation, but this season has fast-tracked the hypothetical into the material, alchemizing promise into production. Gilgeous-Alexander is the first player in NBA history to average more than 23 points and 5 assists for a season while maintaining a True Shooting above 60 percent—all before his 23rd birthday.

While Gilgeous-Alexander used the latitude he was given by Oklahoma City's rebuild to expedite his developmental curve, Randle’s gaudy statistics have catalyzed the most successful Knicks season in nearly 10 years. After spending much of last season oafishly twirling into traffic with a Chet Hanks-ian level of self-awareness, Randle has somehow fused LeBron James’s muscular locomotion with Dirk Nowitziki’s midrange game, translating the NBA’s 11th most touches (a smidge under 84 per contest) into the best scoring (22.9 points), passing (6.0 assists), perimeter shooting (two made threes on 40.7 percent) and rebounding (10.8 boards) marks of his career. No other player in NBA history has matched Randle’s unilaterally excellent statline before.

But, in the context of this season, the historic statlines of Randle and Gilgeous-Alexander are fairly mundane. Gilgeous-Alexander wasn’t particularly close to even being an All-Star while Randle is arguably not even one of the three best power forwards along the Acela Corridor. Beyond these two players, even the most basic MVP debate is unworkable because the numbers have become so cartoonishly large that it’s impossible to establish a traditional frame of reference or precedent. Nikola Jokic boasts the sixth highest offensive box-plus-minus in NBA history and the counting stats of a more efficient Larry Bird—he has to be MVP; Joel Embiid is markedly more productive than prime Shaquille O’Neal and Shaq is widely considered the most dominant player ever—naturally Embiid should win the trophy. Giannis Antetokoumnpo won handily the last two years and hasn’t dropped off at all this year; Michael Jordan never filled up a box score like Luka Doncic; Rudy Gobert leads the NBA in screen assists.

Forget Topshot: this is the dawn of the NBA’s new age of NFTs—Now Fungible Takes. Here is the natural endpoint of when box-score inflation is so rampant and prevalent that statistics mutate from empiric measurements to expressions of faith. For basketball fans, nearly every argument is now supportable. Nearly every argument is conceivably correct. There’s no truth beyond the construction of one.

Next: The NBA's Scoring Boom, Part 2