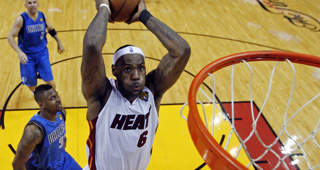 No one has ever doubted the talent that was brought to South Beach. The criticisms of LeBron James are almost always rooted in the intangibles -- is he mentally tough, is he a strong leader, does he have that killer instinct to win it all?

In a recent interview, Charles Barkley vocalized these sentiments perfectly: “He’s a great, great player, but as far willing to kill people like Michael, I don’t think he has that in his DNA.”

NBA stars are judged by their ability to win championships, and when they don’t, it’s usually seen as stemming from some type of deep-rooted character flaw. So when LeBron’s Cavs didn’t win in Cleveland, many were dubious about his seemingly undeserved reputation as the league’s best player. And now that he’s failed to win a championship while playing with two All-NBA caliber teammates, he has “no excuses.” Clearly this loss says something not too terribly flattering about him as a human being.

That’s why so many are ready to write him off after the Heat’s loss to the Mavericks. If being a winner is something ingrained in your DNA, than it’s not something you can change. You either are a winner or you aren’t.

Even though LeBron is only 26, even though his teammates are in the prime of their careers, and even though there are a lot of aspects to his game that he can improve, it doesn’t matter. He doesn’t have “Jordan’s DNA.” He’ll never lead his team to a championship.

Rooted in this criticism is a very undemocratic idea: the divine right of kings. People do not earn the throne; they are born into it. It’s in their DNA to rule. It doesn’t matter how many years a commoner spends lifting weights, only young Arthur can lift Excalibur out of the ground.

Basketball, more than any other American sport, is rooted in mythology, and the story of Michael Jordan is the founding myth of the modern NBA. Jordan’s enduring popularity comes not primarily from his talent as a basketball player, but from how his story tapped into a part of our collective subconscious.

Every religion tells some variation of the “Hero’s Journey”, the story of how a boy becomes a man. The details change, but the underlying pattern is remarkably consistent. Joseph Campbell first described this pattern in the 1940’s, and his work was the primary inspiration for the story of Luke Skywalker in the original Star Wars trilogy.

Jordan’s career arc almost perfectly mirrors this journey: the young man from humble origins (cut by his high school team) proves his doubters (the coach that cut him, the team that passed on him in the draft) wrong and becomes the best player in the world. But before he can finish his journey (win a championship), he must face an implacable foe (the Bad Boy Pistons) who turn his best qualities against him (the Jordan Rules). And it’s only after he learns some valuable life lessons (the Triangle Offense) from a wise older man (“the Zen Master”) that he can defeat them and take his rightful place as a champion.

Most importantly, one day, he shall return.

That’s why the NBA and the shoe companies have spent over a decade frantically searching for “the next Jordan”, and why no one has been able to live up to his standard. They’re being compared not just to a man but a myth.

It’s a bar no one could pass, not even Jordan himself. For what the world of social media and the 24/7 news cycle make of the 26-year old Jordan -- an MVP who consistently came up short against his arch-rival in the playoffs?

Which is not to say that LeBron is as good as Jordan. He isn’t. He needs to develop a low-post game and a more consistent jump shot before we can have that conversation.

But few basketball players are finished products at 26. Aside from the eerily consistent Tim Duncan, the reputation of every MVP since Jordan retired -- Iverson, Shaq, KG, Kobe, Nash and Dirk -- has changed significantly after that age.

Dirk’s journey, from “choke artist” to 2011 NBA Finals MVP, should give LeBron’s critics pause. Because after the Mavs’ post-season collapses in 2006 and 2007, almost every single criticism being made about LeBron was being directed at the seven-foot German.

The first MVP to lose in the first round of the playoffs in a generation, the epitome of someone who lacked the killer instinct to win a championship, who averaged 19 points on 38% shooting while his team lost to the #8 seed, had as many fourth quarter points in these Finals as both Wade and LeBron.

I don’t think Dirk learned to become a champion at some point between 2007 and 2011 anymore than I think Kobe forgot at some point between 2002 and 2009. Rather than being something only a select few are born with, every great player has “Jordan DNA” inside of them. No one reaches the very apex of their profession without a tireless work ethic and the desire to be great.

That’s the beauty of becoming a champion -- you only have to succeed once. Anything that happens before that is just progress. As Jordan himself said: “I’ve missed more than 9,000 shots in my career. I’ve lost almost 300 games. Twenty-six times I’ve been trusted to take the game-winning shot and missed. I’ve failed over and over again in my life. And that is why I succeed.”