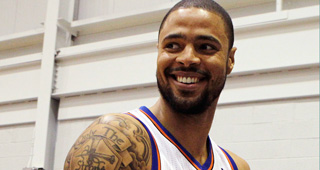 There are three groups of people who are virtually guaranteed to die rich from the moment they are born.

First off, we can point to the descendants of the super-wealthy. The Forbes’ 2011 list of the top-10 wealthiest Americans includes half who inherited a sizable portion of their wealth (three Waltons and the Koch brothers).

Second, we can look to those born with the capacity to accurately throw a baseball 90 miles per hour with their left arm. CC Sabathia, Johan Santana, Barry Zito, Mike Hampton, Cliff Lee have the five richest contracts ever given to a pitcher. They were respectively born in Vallejo, Venezuela, Las Vegas, Florida and Arkansas with very little in common except for the fact that they have the power and endurance in their left arm to throw six to eight effective MLB innings every five days.

Third, we have seven-footers with even a little bit of athleticism and coordination. Their worst case scenario is a full-ride scholarship at a fine university and we'll get to their medium and best cases shortly.

It doesn’t matter if you were born in Lithuania like Arvydas Sabonis and Jonas Valanciunas, Nigeria like Hakeem Olajuwon, or in Everett, Massachusetts like Nerlens Noel, basketball scouts and coaches will find you and do everything within their power to turn you into a multi-millionaire by your early twenties. There is no such thing as a 6-foot-2 project point guard, but coaches will always find the next Alexis Ajinca and Sim Bhullar they can invest their resources on even as large longshots.

The incoming college class of 2013 has a collection of three supremely gifted forwards in Jabari Parker, Julius Randle and Aaron Gordon. The combination of pure basketball ability and athleticism as high school juniors is absolutely remarkable. But the aforementioned Nerlens Noel, who is also a high school junior, could end up being more prized in the NBA and selected first overall in the 2014 draft ahead of those players. Noel is such a potential game-changer on defense as a true center with enough latent offensive capabilities to envision him morphing at least partially what we expected from Oden.

Point guards were selected first overall in three of the past four drafts (Derrick Rose, John Wall and Kyrie Irving), but it is more of an aberration than a trend. The first overall pick of the 2012 NBA Draft will almost certainly be a shotblocking power forward in Anthony Davis, or the most physically impressive center prospect since Dwight Howard in Andre Drummond.

In the 56 years the NBA has given out an MVP award for the regular season, a center has won 30 of them. Between 1958 and 1980, a center won 22 out of 23 MVP awards. The Finals MVP has been won 16 times by a center in 43 seasons, including the six won by Michael Jordan and excluding the 11 Bill Russell would have won had the award existed.

If it wasn’t obvious that the demand for centers far outpaces supply after over 100 years of basketball history, the 2011 offseason has been on a singular mission to prove it to you.

Dwight Howard’s future with the Magic and potential value as a trade target is a simple starting point of this issue that becomes more and more definite when accounting for the contracts that have been signed this winter.

The Knicks signed Tyson Chandler to $58 million contract over four seasons. Chandler was the defensive lynchpin for the title-winning Mavericks, but he has now been traded six times in his career if you count draft rights deals, rescinds of trades and sign-and-trades. Chandler is an excellent signing for the Knicks since he is at a similar point of his prime as Carmelo Anthony and Amar’e Stoudemire and improves their defense, but he played averaged 48 games and a PER of 13.0 during the 08-09 and 09-10 seasons.

The Warriors signed DeAndre Jordan to $43 million offer sheet over four years that is matched by Clippers. While at least two teams were explicitly ready to pay Jordan $10M annually, 78% of voters on RealGM disagreed. Jordan is an excellent shotblocker, dunker and a solid rebounder, but does very little else.

Rockets offer $55 million max contract to Marc Gasol. Grizzlies effectively match offer. Gasol is an efficient scorer and interior defender/shotblocker, but he was fourth on his team in PER last season and 15th overall at the position right behind Javale McGee.

After striking out on Chandler and Jordan, the Warriors signed Kwame Brown to one-year, $7 million contract. Brown has been a perennial disappointment since being draft first overall by the Wizards in 2001 and his breakthrough season with the Bobcats still only resulted in his production being on par with a decent backup.

Nene remains unsigned, but has been negotiating a four-year deal with the Nets worth between $60 million and $65 million. He is one of the NBA’s better scoring bigs, but his contributions defensively are typically limited.

Update: Nene agreed to a five-year, $67 million contract to remain with the Nuggets.

Samuel Dalembert also remains unsigned, but is receiving interest from no shortage of teams.

Greg Oden may be physically unable to play this season, but the Blazers signed him to a one-year, restructured deal. When he becomes an unrestricted free agent next summer, there are expected to be several teams willing to gamble on the possibility that he can become healthy again.

In this era of advanced analytics and crowd sourcing, NBA front offices are becoming more intelligent, but the same mistakes are being made in giving bloated contracts to centers because it is a necessary gamble. The most egregious, worst return on investment contracts in NBA history have been to the likes of Jerome James, Adonal Foyle, Vin Baker, Jermaine O’Neal, Ben Wallace, Eddy Curry, etc. The Gilbert Arenas and Allan Houston contract nightmares are typically injury-related.

We know that the collected odds of Chandler, Jordan, Gasol, Brown, Nene, Dalembert and Oden becoming sounds investments in hindsight are long, but you have virtually no shot of even getting out of the first round without production at center.