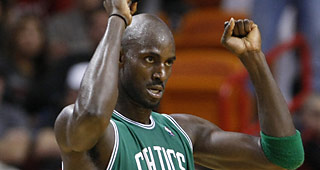 Kevin Garnett injured his right leg in Boston's 104-92 loss at Detroit on Wednesday.

"I can't tell you much more than what you know already," said Doc Rivers on Thursday morning. "They're going to do more tests today, I think they'll do an MRI. We do think it's muscle-related, we don't think it has anything to do with the knee, but we don't know. So we're just going to wait and see."

Garnett appeared to injure his leg after cutting to the basket and planting with two feet before going up for a dunk. As he went up into the air, it was clear Garnett was already hurt and he subsequently hung on the rim longer than usual.

Garnett then limped and grimaced to halfcourt.