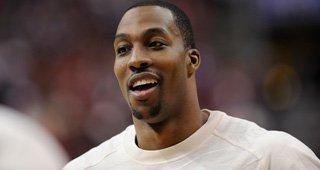 Dwight Howard has long coveted the Brooklyn Nets as his next landing spot, but after a summer filled with daily rumors of four-team trade proposals, the six-time All-Star has moved on from his Big Apple infatuation and is locked in on joining the Los Angeles Lakers, sources tell RealGM.

The Lakers, Orlando Magic and Cleveland Cavaliers are reportedly discussing a three-team trade that would send Howard to the Lakers, Andrew Bynum to the Cavaliers, while the Magic would receive Anderson Varejao and multiple draft picks.

Howard has always been impressed with the Lakers’ winning tradition and intrigued with the off-court opportunities that come with playing in Los Angeles.

Questions about Howard's role with the team, however, became an early concern for the three-time NBA Defensive Player of the Year. Howard has since moved on from those concerns and is confident he will be an integral part of a team that will have a chance to compete immediately for a championship, according to sources that spoke with RealGM.

The Lakers are reportedly ready to make the trade, but first need assurance from Howard that he will commit to the team long-term. Sources say Howard is “excited” about the opportunity to play for the Lakers and will re-sign with the team when his contract expires at the end of the 2012-13 season.

- Jarrod can be reached at Jarrod.Rudolph@RealGM.com or on Twitter @JRudolphSports