Trey Burke Rising On Draft Boards, Could Go No. 1 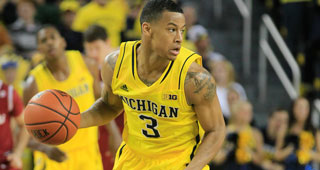 Trey Burke is projected as going fifth overall in the most recent mock drafts of Jonathan Givony and Chad Ford.

Burke is widely considered the top point guard in the draft class, ahead of C.J. McCollum, Michael Carter-Williams and Dennis Schroeder.

"I think Trey Burke is still rising," wrote Ford. "Could go as high as the No. 1 pick. Lots of scenarios where he is No. 2 or No. 3 off the board. PGs are always coveted and Burke's spectacular season continues to intrigue people."

Nerlens Noel is generally considered the favorite to be the top pick in the draft.