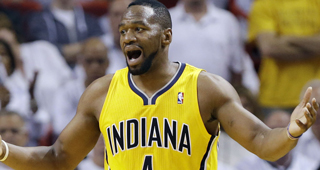 A defensive-minded swingman at 6-foot-6, Young received interest from several teams throughout free agency, including the Sacramento Kings and New York Knicks.

The Spurs lost Gary Neal in free agency this offseason, but they've re-signed Manu Ginobili and added Marco Belinelli and Young. Danny Green is expected to retain his starting role this season.

Young, 28, was the Memphis Grizzlies' second round draft pick in 2009 out of University of Pittsburgh and signed a free agent deal with the Philadelphia 76ers before his season with the Pacers. Young has averages of nearly six points and two rebounds per game over four seasons.