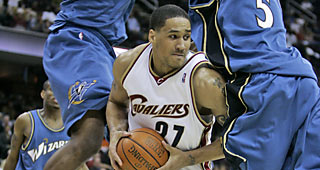 Despite the deal being unguaranteed, Jones will receive a chance to make the Jazz's regular season roster, with Utah seeking healthy bodies in the frontcourt.

Jones, a rugged big man at 6-foot-11, finished the 2012-13 season with the Golden State Warriors. He played with the Warriors' summer league team in July.

Out of Saint Joseph's University, Jones, 30, has averaged 1.3 points and 2.3 rebounds in five seasons in the NBA with the Boston Celtics, Cleveland Cavaliers, Charlotte Bobcats and Phoenix Suns. He played overseas and in the NBA Developmental League to work back into the league after the 2009-10 season with the Suns.