Wizards Show Interest In Will Bynum 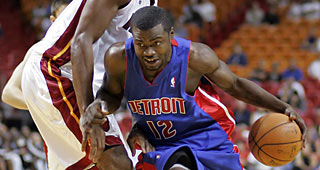 Along with the Cleveland Cavaliers, the Washington Wizards have expressed interest on Will Bynum in the Chinese Basketball Association, league sources told RealGM.

Since arriving on Guangdong Southern, Bynum has scored 23.2 points and dished 7.4 assists a game while leading the club to an undefeated record. Guangdong is 32-3 and could play until late March, delaying Bynum’s potential return to the NBA.

In seven seasons with the Detroit Pistons, Bynum averaged 8.2 points, 3.3 assists and 18.5 minutes in 353 games. He was traded to the Boston Celtics in October and subsequently released.

Washington has one spot available on its roster.